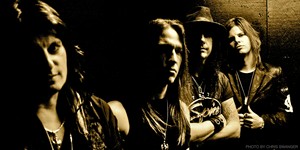 Hotel Diablo, the new band featuring vocalist Rick Stitch (Ladyjack, ex-Adler’s Appetite), guitarist Alex Grossi (Quiet Riot), bassist Mike Duda and drummer Mike Dupke (both of W.A.S.P.), have announced that they will be releasing an EP in January of the material they have been recording with producer (and former Guns N’ Roses/Rockstar Supernova guitarist) Gilby Clarke.

The 6 song EP will be available via iTunes and other online music stores on Tuesday, January 10th.

“We are very excited to get this stuff out there” says guitarist Alex Grossi. “We have been taking our time in the studio and I think people will be into what we have so far”

An audio sample previewing the tracks “All These Years”, “What You Do To Me” and “Psycho California” can be viewed below.

Hotel Diablo will debut many of the new songs live on December 8th at the Whisky A Go Go in West Hollywood, California.

Hotel Diablo released its first single, “Set It Off”, back in July. It can currently be heard exclusively on the band’s web site, www.thehoteldiablo.com. It is also available on iTunes and other online music stores.