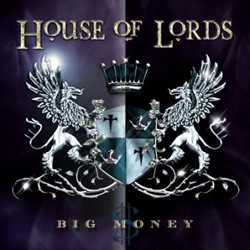 House Of Lords Return With ‘Big Money’ In September

Frontiers Records is pleased to announce the release of the brand new House Of Lords studio album ‘Big Money’ on September 23rd in Europe and September 27th in North America.

Following on the heels of the successful release of ‘Cartesian Dreams’, House of Lords are coming back with another amazingly strong release which presents again all the trademark elements of their Melodic Hard Rock sound. “I am very proud to have done four HOL CD’s with the same line-up” says singer James Christian, “I enjoy working with every one of them and plan to do many more records in the future. Mark Baker has now been on board as a co-writer for the last two CD’s I love working with him. We are totally on the same page when writing new music”.

And indeed, the new album, is truly newest addition to an already stellar catalogue of songs. ‘Big Money’, is well, ‘BIG’. The album starts with the trademark vocals of James Christian and crashes into a Power Rock Classic that you will not forget after the first listen, followed by in a song that Christian describes “as the band’s best work to date”: “One Man Down”. Each song has its own distinct quality as you would expect from The Lords and once again the album is full of soaring choruses, awesome guitar work and songs that grab you from the first listen and don’t let go.

“The elements we use on “Big Money” are always the same for us and that is to write and record the best songs that we can” explains Christian. “We always write enough songs for more than one CD and then we pick the best songs to make up the new record. We will always be a Melodic Rock Group. It is the music that made us want to be musicians in the first place. So we will always stay true to that art!”. James teamed up again on the songwriting with long-time friend and partner Mark Baker along with the other band members Jimi Bell and BJ Zampa and Swedish producer/guitarist Tommy Denander.

House of Lords debuted in 1989 with the release of the self-titled album, a record which is still regarded as one of the best Arena Rock releases of the 80’s. The colossal sound, the soaring vocals of James Christian and instrumental capabilities of the band (which featured ex Angel and Giuffria Gregg Giuffria, along with such luminaries as Lanny Cordola, Chuck Wright and Ken Mary), reminiscent of such frontrunners as Whitesnake, Deep Purple and Van Halen, immediately brought the band to the attention of the media and fans.

With their sophomore release entitled “Sahara”, House of Lords gained considerable chart success with their cover version of Blind Faith’s “Can’t Find My Way Home”. After a tour with Nelson in 1991, the group disbanded, eventually coming back with a new lineup (only featuring original members Giuffria and Christian) in 1992 with “Demon’s Down”. With the change of the musical climate, House of Lords went into hibernation, until the original lineup came back together in 2000, releasing of the controversial “Power and the Myth” an album which featured a sound leaning more towards Progressive Hard Rock with 70’s rock influences.

After a short European tour, singer James Christian decided to go back to the trademark Arena Rock sound of House Of Lords, putting together a new line-up with the blessing of founding member Gregg Giuffria, who opted out right before the release of ‘Power and the Myth’. New members Jimi Bell on guitars, B.J. Zampa on drums and Chris McCarvill on bass supplied a true powerhouse sound to the fifth studio album “World Upside Down”, a record which caused a real stir in the Hard Rock and Melodic Rock scene and was followed up by the equally impressive ‘Come to My Kingdom’ and ‘Cartesian Dreams’