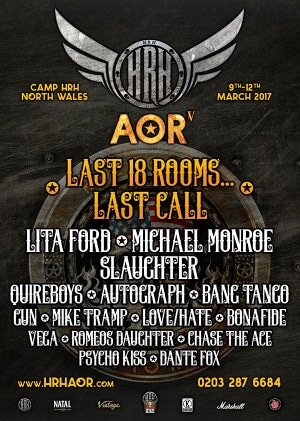 The HRH AOR Festival has announced its line-up for 2017, which includes a great mixture of American based and European based hard rock / heavy metal bands or artists of whom many achieved stardom in the late ’80s / early ’90s era. The headliners appear to be Lita Ford, ex-Hanoi Rocks singer Michael Monroe and Slaughter. The HRH AOR Festival will take place from March 9 to 12, 2017 in North Wales, UK.

The American based talent includes Autograph who have just released a five song EP titled Louder, Bang Tango who have not played in the UK for a number of years, Love/Hate whose debut album Blackout In The Red Room received a large number of votes in the Top 12 Albums that have stayed with Sleaze Roxx readers survey, and Slaughter who achieved double platinum success in the US with their debut album Stick It To Ya and reportedly have not been in the UK since 1992.

The European based talent includes ex-White Lion frontman Mike Tramp who needs no introduction, Swedish rockers Bonafide who twice had albums that ranked in Sleaze Roxx’s Top Ten Albums of the Year (2009 and 2012) and the energetic Michael Monroe who seemingly keeps getting better with age.

The HRH AOR Festival posted the following message in part on its Facebook page:

“For Melodic Rock Fans, HRH AOR 5 will be an epoch of Melodic Rock which will also feature sister brands on separate arenas, HRH Sleaze & HRH Glam…

With another 20 plus bands to come, HRH AOR 5 will be the pinnacle event for Melodic Rock enthusiasts.

With only 18 rooms left, you’ll have to move quickly to make sure you reserve your AOR Throne for cycle 5.