Eight days after announcing that due to low ticket sales, it was forced to trim its festival roster by losing a few bands, the Hull Metal Heaven has now announced that it is canceling its rock festival that was supposed to take place at The Welly Club in Hull, U.K. from September 14 to 16, 2018. Hull Metal Heaven had previously eliminated three bands (Sven Gali, Art Nation and The New Roses) from its roster and started a crowd funding campaign to be able to forge ahead but apparently that was not enough to avoid the festival’s cancellation. 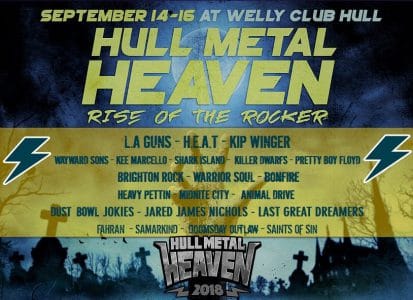 It is with regret that we are delivering the news that we have no choice but to cancel HMH2, of course this is a decision that hasn’t come lightly.

Everything within our power has been attempted and tried to pull this off even at the personal cost of everyone involved. As a result, and with very heavy hearts the festival has been cancelled.

We wanted to give enough notice as soon as possible for people to change their plans and not board planes etc.

We apologize to all the fans who were planning on attending and who have booked accommodation and express our regrets to bands who were looking forward to performing. It is not a decision taken lightly but with all the difficulties we were facing, we feel we have no choice in the matter.

Please accept our most sincere apologies and we are forever grateful to everyone who has shown us support, it won’t be forgotten.”