Hurricane are in the middle of doing a new record

Hurricane guitarist Robert Sarzo was recently interviewed by Marcelo Vieira for Marcelo Vieira Music. Sarzo was in Hurricane from 1985 to 1989 and has since been in the band since 2010. The group currently consists of Sarzo on guitar, Tony Cavazo on bass, Chad Cancino on lead vocals and Mike Hansen on drums. 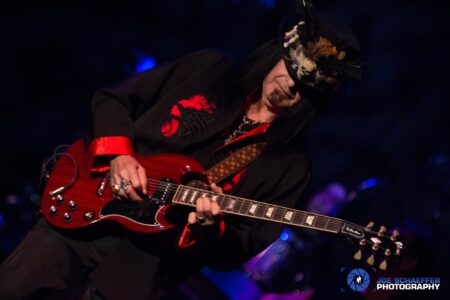 Sarzo was asked whether he had unreleased songs from his ’80s Hurricane days such as the track “10,000 Years” which appeared on the Slave To The Thrill (1990) album that he didn’t play on. The guitarist replied (as transcribed by Marcelo Vieira with slight edits): “I have stuff like that. Actually ,I have it because I have the masters. Tony and I talked about it and we might take one of those songs and record it, we are working on it. We are in the middle of doing a new record and our singer is Chad Cancino, and also the drummer we’ve had Mike Hansen, he has been playing for us for ten years now. It’s on English and Spanish, we want to tour South America too.”

In terms of whether Hurricane are working with a record label, Sarzo indicated: “We’re going with a label, right before the pandemic here in L.A, we were in the middle of a negotiation of a contact with one of the L.A labels here that handles a lot of bands from the 80’s…. I don’t want to say the label because our manager is also looking around.”

In regard to finding the best record deal, Sarzo piped in: “Yeah! Because it’s also in Spanish, the same ten songs in both English and Spanish, and we’re recording everything because of covid-19 individually, so I’m producing the record. I live in a boat and I start the recordings here and I send a MP3 to Tony Cavazo, we send tracks back and forth with pro tools and that’s how we’ve been writing, then it goes to our engineer, then to our drummer in Chicago. When we’re ready to do the vocals, we have the vocalist come in into the engineer’s studio and record the vocals there.

On what fans can expect on the upcoming new Hurricane record, Sarzo stated: “Very melodic metal heavy from the ’70s but also like the ’80s.”

You can read the rest of the interview with Robert Sarzo in the Portuguese language at Marcelo Vieira Music‘s website (Part 1 and Part 2).

Hurricane performing “I’m On To You” live at The Venue in Denver, Colorado, USA (video by Rockin’ Ron for Decibel Geek):