Hurricane fans should be rejoicing as the group’s third album Slave To The Thrill, which was originally released back in 1990, has been remastered and is now available with two bonus tracks via Bad Reputation Records. 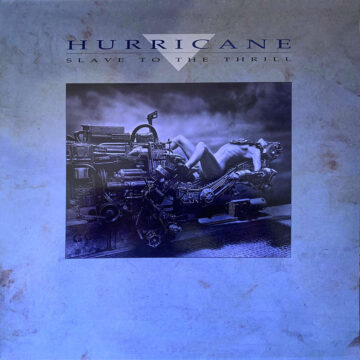 Quiet Riot‘s Kevin DuBrow introduced Robert Sarzo and Tony Cavazo in the early 1980s. After deciding to form a band, Sarzo and Cavazo recruited singer Kelly Hansen, drummer Jay Schellen and guitarist Michael Guy. With little label interest, the band decided to release an album themselves, Take What You Want. The album and constant touring led to them getting a major label deal. In 1986 and 1987, they opened for Stryper on their To Hell With The Devil album tour. They were soon signed to Enigma Records, the same label as Stryper. They also opened for Gary Moore‘s 1987 US tour. In 1988, the band released their major label debut album, Over The Edge. Propelled by a powerful, yet melodic heavy metal sound, the album made #92 on the US album charts and featured a cover of Alice Cooper‘s “I‘m Eighteen,” as well as the band’s most successful song, the Jeff Jones-penned “I’m On To You.” The title track, “Over the Edge”, was also released as a single.

In 1989, Sarzo left the group and was replaced by ex-Lion guitarist, Doug Aldrich. This line-up recorded the album Slave To The Thrill, which was released in 1990. With their third offering, Hurricane provides us with arguably their best effort. Filled with the hooky, highly infectious melodies that beg you to sing along with them, Slave To The Thrill is an album that could easily define the term hair metal band. Led by the dramatic vocals of Kelly Hansen, you will quickly be taken back to the days of groups like Whitesnake and Foreigner. Not surprising, Kelly would join the group Foreigner after the break-up of Hurricane, as a replacement for Lou Gramm.

Doug Aldrich‘s riffs and licks combined with Kelly Hansen’s vocals, Jay Schellen’s drums, and Tony Cavazo’s bass, it was obvious this was an off-the-charts outing. Opener “Reign of Love” solidifies that within seconds, it’s a hell of a way to kick things off. “Next To You” has this riff that melts all defenses, and Hansen sings his ass off. “Young Man” is Aldrich’s show from start to finish, and an anthem for rebellion. The sexy groove of “Dance Little Sister” is no accident; the band knew exactly what they were doing and it shows. This brings us to one of all-time favorite ballads in the world, “Don’t Wanna Dream” where the chorus is absolutely beautiful. “Temptation”, “10,000 Years” let Aldrich once again comes up with some killer guitar sounds. After a short interlude comes “In The Fire” with a bluesy riff and “Let Is Slide”, an absolute great swamp-boogie. A slick bass groove  permeates “Lock Me Up” and is only accented further by Aldrich’s six-string magic once again. The record concludes with hellraiser and barnburner “Smiles Like A Child”. Overall though, Slave To The Thrill from Hurricane still stands as one of the best albums from the period of hair metal.

The album’s relative lack of success could be attributed to changing musical climates. Shortly after the release of this album, Aldrich moved on to Bad Moon Rising. Slave To The Thrill is one that has everything that a fan of this type of music would  ever want.”