Swiss rockers Hysteria consisting of lead vocalist Tom Hoochy Coo, guitarists Arni and Lucas, drummer Mâse and bassist Manu have unleashed a video for the title track of their upcoming new studio album Rock Police, which will be available on March 14, 2020. 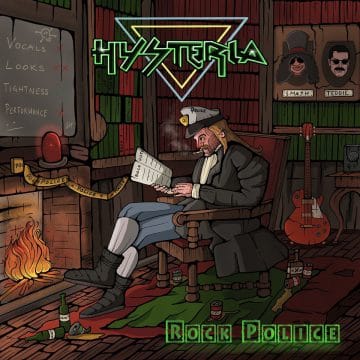 Spotify indicates the following about Hysteria (with slight edits):

“Hysteria was founded back in 2013 by Arni, Manu and Mäse. After a few good rehearsals, the three musicians decided to look for a second guitar player.

It was not easy to find the right person, but some weeks later, Luca walked through the door. It took only a few minutes to realize, that Luca was the perfect choice. Manu took over the lead vocals and finally Hysteria was born!

On March 6th 2015, Hysteria played their very first show. A sold out show at the Starclub in Uster ZH, followed by a few more gigs all around Switzerland and near foreign countries. 2016 bad news came from Hysteria. Due to some health problems, Manu had to quit his job as a lead vocalist. Happily, he still will play the bass. So in 2016, Hysteria had to look for a new lead vocalist. After some rehearsals with possible new singers, Hysteria announced in January 2017 Tom Hoochy Coo (ex-The Dizzies, ex-King Zebra) as their new frontman! Tom Hoochy Coo did his first show with Hysteria at the Ölfleck Frauenfeld TG in February 2017.

After this successful start with Tom Hoochy Coo, Hysteria was working on their songs, to be prepared for recording their first 6-track EP in April/Mai at Mack Music Studio. On October 27th 2017, the band successfully released their first EP called “Back To The Oldschool”.”

This is our first Music Video to the song “Rock Police”!Join us on Social Media!Facebook: https://www.facebook.com/HysteriaOfficialBandpageInstagram: https:/…