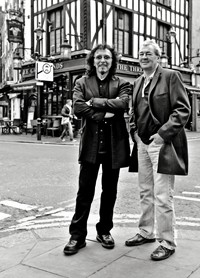 Ian Gillan And Tony Iommi Come Together Again In WhoCares

Black Sabbath lead guitarist Tony Iommi and Deep Purple lead singer Ian Gillan have reunited for the first time since working together on Black Sabbath’s 1983 Born Again album. The resulting two-man project, WhoCares, features an all-star array of talent. All of the money generated from the digital Internet release of the two-song single on Tuesday, May 10, will benefit the music school of Gyumari, Armenia, an area which never recovered from a massive 1988 earthquake.

Additionally, on June 21, earMusic, in cooperation with Eagle Rock Entertainment, via its subsidiary Armoury Records, will release the two songs plus a 30-minute documentary showing the involvement over the years of Gillan and Iommi to the Armenian cause, on a special CDE (enhanced CD).

Gillan told www.blabbermouth.net that the idea came when he and Iommi flew back from the area together “after being inspired by the enthusiasm of everyone there to get this thing done,” adding, “it was brilliant working with Tony again after all these years. He makes life easy for a singer. The other guys need no introduction, do they?”

“Some 20 years ago,” adds Iommi, “when the call came, I thought, ‘well, at least I’ve helped,’ but it was going to Armenia and seeing the actual devastation caused by the earthquake that really made me realize that funds were still needed.”