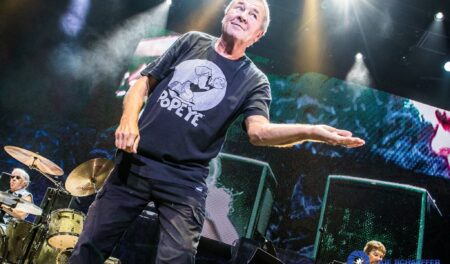 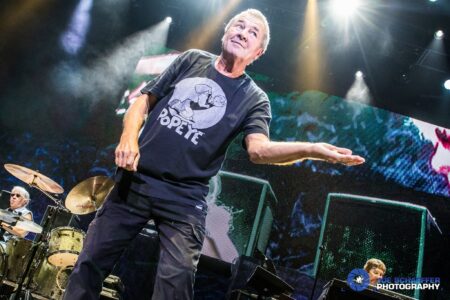 Gillan was asked on his thoughts about the statement “rock is dead” but the singer ended up raving about Ezrin instead. Gillan stated: “Well, I don’t think it’s entirely correct, but if you want to generalize, then you’re probably right. But specifically, we’ve never thought of it that way. I mean, we’ve been on the road since we were kids. We’ve been writing songs since we were kids. That’s just what we do. We could write a song every five minutes debating about different subjects, or whatever is going on in your life. That’s what we talk about. That’s how we interact. We don’t walk around in cut-off denim and ponytails, it’s not like that in real life. Real-life is vibrant and interactive, and it’s about human chemistry. So, if you’ve got a band that can get off on that kind of thing, then why wouldn’t you use it? I mean, it’s so exciting, so how could you not? And then all of a sudden, later in your life you bump into somebody like Bob Ezrin, and you make your dreams come true in terms of sound.

In terms of the way our albums sound, I’ve always thought since the early days that we kind of got away with it when we were kids because of enthusiasm and histrionics. But looking back on it, I was always a bit disappointed with the sound of our records because I felt that the production values weren’t very high. So, to bump into Bob, who has such a great grasp on little things like arrangements, it’s been amazing. Bob keys in on the minor details that are so important for making things that could otherwise drag on a little bit. He tightens them up and hones in on the most important sounds, and he makes them better. Bob is just ideal for us, and to come across that sort of thing now, well, why wouldn’t we keep on writing, and writing, and writing? With the way we’re going and writing these days, we could do an album a month. [Laughs].”

In terms of how Deep Purple ended up working with Ezrin, Gillan indicated: “It was a business connection we had. It wasn’t anyone in the band, and it wasn’t Bob himself. It was something behind the scenes, somebody said to Bob, “Do you want to do a Deep Purple album?” …. “Boy, yeah I do,” and so it happened. We met up with Bob, and we had a brief meeting in Toronto before anything was agreed upon. From the get-go, we got on like a house on fire, and we realized we had exactly the same ideals. He told us what he would do, and how he would operate. From my point of view, I was basically thinking, “My God, we’ve been waiting for this for years, and years and years. So let’s go with it.” To date, Bob hasn’t disappointed. The guy is a genius in my book.”

With respect to how Ezrin has impacted Deep Purple‘s sound, Gillan opined: “It starts with the simple things, really. Deep Purple has never really had a leader. It’s more we sit down, we chew the fat, and we say, “Let’s do this. Let’s do that.” I guess, in a way, we drift along in that sense. So when we’re working in a studio, for example, on a new song, or a new arrangement, we tend to let things go on a little bit too long, and somebody says, “Oh, let’s take it in this direction.” … “Okay, let’s try it that way.”We end up playing around and dicking around with things for hours, and hours, and hours, and so the theme perhaps becomes somewhat diluted or stunted. With Bob, he makes it a bit easy, he will just say, “I’m not liking it, boys. I’m not liking it.” He stops us from dicking around, and he’ll say something like, “Okay, we should just go back to the original idea. Let’s just go with that, cut it short, move on to the bridge, and then we’ll take it from there.” We do that, and all of a sudden, you realize that we’ve been waffling, which just to keep somebody happy out of respect, or whatever. So, we needed a leader in that sense, and in terms of arrangements too. That’s the first thing.

Secondly, a big difference is encouragement. Bob is a consummate musician. I mean, everything from classical music, to jazz, and everything else. He has been there and done it all. He can play it all, and he understands it to boot. There’s mutual respect between artists who are also good musicians, and there’s an understanding. In the studio, or when we’re writing, if somebody’s lost for an idea, Bob will pull something out of the cupboard and say, “What if we did that?” He’s well researched. He knows all about us. With that, he will say, “You didn’t have the right sense there. That wasn’t a great sound or your best technique. Can you try that again?” And, of course, you try it again, and it comes out differently. It’s little things like that. I could go on, you know, he’s got a great sense of humor, we’ve got the same interests, and we can have long, creative conversations. I think what it comes down to is that he’s just an all-around good influence. He’s kind of like a secret member of the band, really.”

You can read the rest of the interview with Ian Gillan at Vinyl Writer Music‘s website.