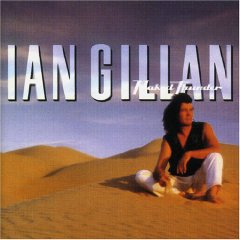 IAN GILLAN RE-RELEASES DUE IN NOVEMBER

Could there possibly be a single rock fan on this planet unfamiliar with the name Ian Gillan? Very unlikely. Best known as the lead singer of the legendary group Deep Purple, Gillan took part in over forty musical projects, from guest appearances to solo albums, each time proving his extraordinary talent.

Naked Thunder
Gillan’s solo album from 1990, released soon after his departure from Deep Purple. It features a varied selection of songs, with one of Gillan’s most passionate and impressive performances in “Loving On Borrowed Time” and “No More Cane On The Brazos”. All of the songs except “Moonshine” (Gillan/Morris/Buckle) and “Brazos” were written by Ian Gillan and Steve Morris. The material ranges from hard rock that feels a bit like Deep Purple to more balladic sort of works.

Toolbox
Gillan’s sixth solo cut, was released in 1991. The album was immediately recognized by the critics as Gillan’s return to the old Deep Purple sound, particularly comparable to the albums “In Rock” and “Machine Head”. The fact is that “Toolbox” is so far Gillan’s most hard rock-oriented solo offering. The eerie 80’s-like production (courtesy of Chris Tsangarides) and the Randy Rhodes sounding guitars made up for a truly spectacular album. Some of the most prominent tracks from “Toolbox” are surely the opening rocker “Hang Me Out to Dry” (with brilliant performance by ex-Mountain guitarist Leslie West), the beautiful ballad “Don’t Hold Me Back” and “Pictures of Hell”, written by Gillan after his experiences of seeing the aftermath of the Armenian Earthquake in 1989. Needless to say that the album is still considered as one of Gillan’s best efforts among his solo offerings.

Cherkazoo & Other Stories
A collection of 18 extremely rare solo tracks recorded between 1973 and 1975. The first eight tracks (six songs, two dialogues) are taken from the previously unreleased soundtrack to Cherkazoo, a children’s story Gillan labored on in the early ’70s. The remainder of the record is devoted to sessions Gillan cut between his departure from Purple in 1973 and the beginning of his solo career in 1976. Both items are equally sought-after among collectors, but outside listeners will undoubtedly be taken with Cherkazoo, a delightful collection of psychedelic pop and whimsical British music hall numbers. These are utterly charming songs, sounding like Sgt. Pepper-era Beatles or early pre-Space Oddity Bowie, and having all the appeal of the best obscure British psychedelia. The early solo sessions find Gillan in more familiar territory, hard rock. Don’t expect Deep Purple type music on this CD but if you do love just plain great music by a vocalist you will be very glad that you have this album.

Clear Air Turbulance (Ian Gillan Band)
“Clear Air Turbulence” is the second full length album by Ian Gillan Band, released in 1977. When Ian Gillan was recording his solo albums in the late 1970s and early ’80s, Deep Purple’s influence never went away. But Gillan did make an effort to try different things, and he was at his most experimental on “Clear Air Turbulence”. Instead of the hard rock/heavy metal sound of his former band, we have here is a mix of funk, soul, R & B, gospel, jazz rock/fusion with just a bit of hard rock for good measure. While the singer favors an aggressive hard rock groove on “Money Lender,” the jazz fusion-influenced touches of “Over the Hill,” “Goodhand Liza” and the title song could lead you to believe that you’d been listening to Weather Report and Return to Forever.

Scarabus (Ian Gillan Band)
“Scarabus” is the third album by Ian Gillan Band, released in 1977. It successfully mixes the jazzy stuff from the “Clear Air Turbulence” period with the intensity of the later/Gillan period, for a perfect balance. “Scarabus” represents Ian’s attempt to both give the public what they wanted (screaming and long solos) while remaining true to his original vision of Ian Gillan Band. What resulted was one of the best records of its era, packed with well-written songs and deft fusion arrangements spiced up with some heavy tunes.

Accidentally on Purpose (Gillan/Glover)
“Accidentally on Purpose” is a pop-rock album by Ian Gillan & Roger Glover, released in 1988. While Deep Purple was in the middle of “House of Blue Light” concert tours, settling their ongoing internal battles and routine studio recordings, Gilland and Glover decided to take a little time off and head back to the studio. The material they had in mind was a huge step aside… Anyone that hadn’t paid close attention to the post-Purple careers of Gillan and Glover may have been shocked by the sound of their reunion album. In fact, many Purple fans might be shocked as well, since “Accidentally on Purpose” is hardly reminiscent of any of the group’s records, relying almost entirely on synthesizers, pop melodies, introspection and breezy rhythms. It’s state-of-the-art album-rock for 1988 that manages to incorporate homages to their roots while illustrating that they had a broader stylistic sweep than anyone expected. There is a broad range of styles here — not just hard rock, but sunny tropical pop on “She Took My Breath Away” and “Cayman Island,” roadhouse R&B on their cover of Lloyd Price’s “Can’t Believe You Wanna Leave,” dense horn-spiked pop/rock “Dislocated,” blues on “I Thought No” and synthesized roots rock on “Via Miami”. If you are more open-minded to a very professionally done, artistic and diverse music, that’s the album for you. New edition includes 3 bonus tracks!

All albums will be re-released in a new digipak edition each limited to 1000 copies. Digitally remastered using 24-Bit process, released on a golden disc. The release date is scheduled for 2nd November.