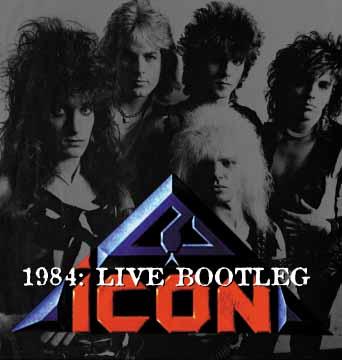 Epicenter Multimedia announces the forthcoming release of Icon-1984; Live Bootleg for the first time on DVD.

Originally released on VHS in 1999 thru Epilogue Entertainment, this single camera shot concert is the only known document of an entire performance by the original band consisting of Stephen Clifford, Dan Wexler, John Aquilino, Tracy Wallach and Pat Dixon.

With the advances in digital technology since its original release in 1999, the beta master was recently put thru a series of broadcast filters and Izotope mastering plug-ins.

These technological advancements have produced a clearer picture and an enhanced soundtrack compared to the original release. As an added bonus, a brand new interview with Dan Wexler and John Aquilino filmed in May 2008 is included to round out this release.

For more information, please visit our website at: www.myspace.com/epicentermulitmedia

“We reget to announce that Icon must withdraw from participation of the Az All Star Concert due to a medical emergency.Guitarist Dan Wexler was recently bit by a brown recluse spider and at this time is unable to play guitar. This is an extremely serious condition and Dan is currently under medical observation.We hope for his speedy and healthy recovery. Since this would have been Icon’s first show in 18 years along with original guitarist John Aquilino and several new members, it is in the best interest of the band, the fans and the charities involved for this concert that icon withdraw from participation at this time.We apologize for any inconvenience this may have caused. We will follow up with further information regarding the band and Dan’s condition as it becomes available.”