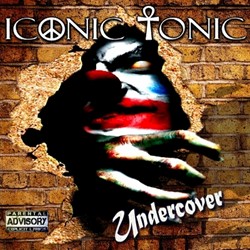 Iconic Tonic have revealed the cover art and track listing of their upcoming sophomore release ‘Undercover’.

The album will feature two new original Iconic Tonic tracks, “Dirty Freaky Love” and “Fly”, as well as seven covers of some of rock and metal’s most well known acts. Among the artists being covered are Judas Priest, Nazareth, KISS, Lizzy Borden, W.A.S.P., Loudness and Van Halen. ‘Undercover’ will also include a special re-mastered version of the critically acclaimed single “Zombie Baby” from the band’s debut album ‘Rock And Roll’, previously released worldwide onJamsync Music.

‘Undercover’ will be released worldwide this summer, with an official date to be announced. The album tracks “Fly” and the cover of W.A.S.P.’s classic “Blind In Texas” are available for streaming at www.reverbnation.com/iconictonic.

‘Undercover’ track listing:
Dirty Freaky Love
You Got Another Thing Comin’
Hair Of The Dog
Zombie Baby
Deuce
Me Against The World
Blind In Texas
Fly
Crazy Nights
Where Have All The Good Times Gone