After parting ways with drummer Jake and bassist Hassy, Imari Tones‘ band leader and frontman Tak is pondering whether his current new band line-up is the right one for the future. The Japanese Christian heavy metal rockers last released the album Jesus Wind in November 2017.

In a video posted on July 19, 2018 (see below), Tak announced the following: “But before beginning, I have one news for you. In fact, it is a sad news. Hassy, our bassist — we’ve played together since 2007. And Jake, our drummer — we’ve played together since 2008. They are not in the band anymore. They left the band in March this year. March 21st, 2018. We played our last concert together in Tokyo. Later, end of March, we had a private party celebrating our journey, ten years of playing music together. We thanked each other, wishing well. And that was it. We said goodbye. We had been playing together for ten years. But they had to leave. There were so many reasons for this. You know, nothing lasts forever. After all, we had been making music together for ten years. So please don’t criticize them for their decision. Please applaud them for what they did with this band. The reasons why they had to leave the band, I will explain them to you later. But the good news is, we have made one last album together. As you know, we have made a very important album called Jesus Wind and released it last year — November 2017. That was a concept album about Japanese Christian history. But we have made one more album. It is called Overture.” 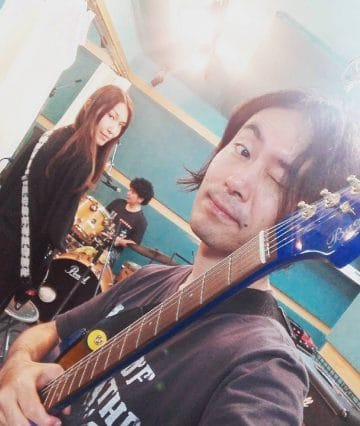 “-Tak‘s journal-
4th rehearsal with the “new lineup”.
So far we have nailed 3 existing songs and 2 cover songs.
It sounds good and I feel comfortable but as a band leader I have some things to consider, especially when I think about the future.

Surely this “new lineup” is sounding good and if asked, I can say “sounding better” than the previous lineup that I played with for the past 10 years. (It’s all about the drummer, you know.)
But the thing is, it’s really slow. Probably it will take 6 more months to be fully ready for the gigs.

It’s because of their “styles”, not because of “skills”.
But, at this pace, surely it will take literal 10 years to make “Nabeshima“.
So it means, if I want to make “Nabeshima” album in a couple of years, I have to do it on my own. Like, playing drums and all the instruments.

If it’s God‘s will, I can do that. I believe I’m capable of playing all the instruments including drums, but I have to ask. I have to ask myself, I have to ask FANS, I have to ask God. (When looking back, the fact we made 6 albums AS A REAL BAND with the previous lineup was a very lucky thing. Kudos to Hassy & Jake.)

This new lineup sounds good and it sounds a little bit different. When playing some of the existing songs, they sound different than the previous lineup. Like, different arrangement. I can say it’s different in a “good way”. But should I consider it’s solely for live performances and the recording is different? (Maybe we can make some live albums.)

Also, I’m sure this lineup works pretty well for playing gigs in Japan (mainly Tokyo region).
But if we can tour overseas in a near future? That is unknown.
(Maybe in 3 years, things will be better and hopefully we can tour overseas.)
(We can play live-stream gigs on internet, though. It’s modern age and we haven’t done that before. Time to try.)

So should I keep going with this line up?

Or should I look someplace else,
like going to New York and meet top-notch musicians and make “Nabeshima” album just in a year? (Is it gonna be a hit? Does music industry even exist?)

Which makes you happier?
I mean, which makes God happier?

Imari Tones‘ The Road To Nabeshima episode one video:

Is Our Band Broken Up!? -The Road To Nabeshima ep1

We gonna start new series “The Road To Nabeshima”.Nabeshima is the name of the sound we are trying to make. It is the Ultimate Japanese Christian Metal.This …