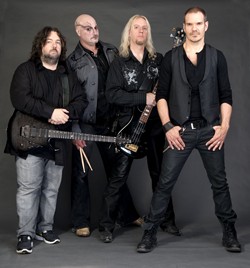 Buckle up and get ready. The band you always wanted to experience actually exists. The perfect amalgamation of everything that makes rock ‘n’ roll with the punches. You wanted the best, well you’ve got it. The whole package. A guitar player who, seemingly effortlessly, delivers stunning solos and riffs of that classic, timeless grit you thought were killed off by grunge. Pounding bass that will put you through the wall. Blistering drumming that’s as solid as it is technically challenging. And on top of all that, add a vocalist that sings circles around the competition.

Impera’s style lies firmly on a classic hard rock ground with a dose of strong melodies collected from the AOR world. All packed in a warm and punchy production by Lars Chriss of Lion’s Share fame. Signed to UK label Escape Music, the first album ‘Legacy Of Life’ will be released in October 2012 with tours to follow.