Sleaze Roxx stated as follows in its review of In/Vertigo‘s debut self-titled album: “In terms of In/Vertigo‘s EP, you’ll recall the movie Jerry Maguire featuring Tom Cruise and where Renee Zellweger uttered this famous line: “You had me at hello.” 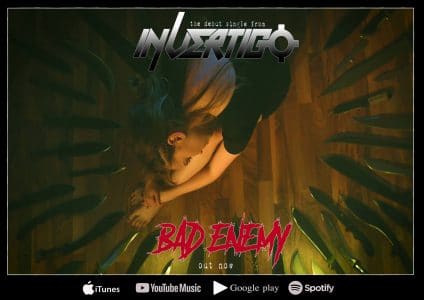 Well, In/Vertigo had me right from my first listen of the opening guitar riff of the opening track “Take It.” After hearing that mind blowing riff, I felt a little bit like at an Iron Maiden concert with Bruce Dickinson stating on Live After Death — “Wait for it Long Beach.” Yes, I was waiting for the lead vocalist Reed‘s singing. Anything half decent would do to make the track “Take It” a good one after that stellar opening guitar riff. To my surprise, Reed‘s vocals were simply killer with some bluesy overtones and plenty of range. How good is the song “Take It”? It just might be my favorite track of the year. Perhaps the most surprising aspect of the song is the maturity level exuded by the band members on the song. It’s not your straight up rocker the way that Airbourne might serve up. There’s some complexity to the track with varying tempos but it simply really rocks!”

Sleaze Roxx went on to conclude: “…. the In/Vertigo EP is simply a stellar collection of four songs mixing classic rock with more up tempo rock n roll and some strong melodies at times. That opening track “Take It” is so good that I just can’t imagine anyone not at least liking the song and most loving the song.”