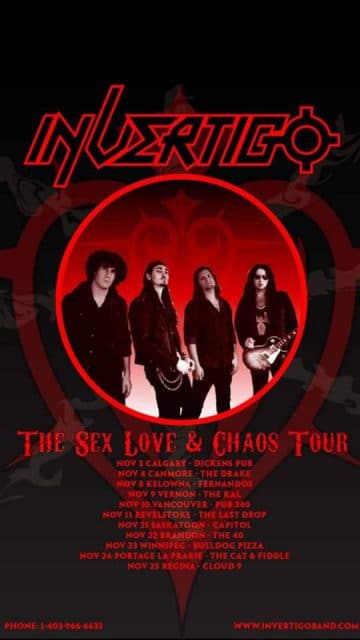 Canadian hard rockers In/Vertigo have reportedly released their “official” EP Sex, Love & Chaos. Sleaze Roxx states “reportedly” because there is little information to be found about the EP on the internet aside that there was a CD release party at the Dickens Pub in Calgary, Alberta, USA on November 3, 2018.

This is not the first time that Sleaze Roxx has had some problems finding information about In/Vertigo on the internet. Sleaze Roxx stated as follows in its concert review of In/Vertigo‘s self-titled debut EP released last year:

“How obscure are these guys? It’s only the second time that I can’t find the actual album cover anywhere on the internet to include with a CD review for Sleaze Roxx. It doesn’t help that “Invertigo” is apparently a pretty commonly used word. Given that I was not able to find the front cover of the album, I am going to have to go with the back cover of In/Vertigo‘s EP, which ironically has the band’s name at least while the front cover just has a big purple “V” with another logo apparently on top of it. I am thinking that a little bit of marketing such as displaying your new album’s cover would go a long way for In/Vertigo!”