After releasing the song “Bad Enemy” last month, Western Canadian rockers In/Vertigo have now released a video for the song. 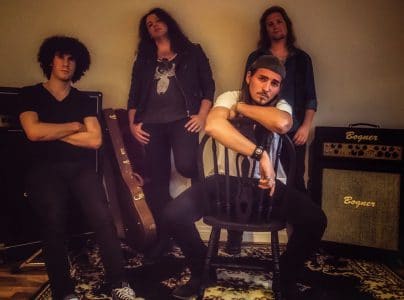 Sleaze Roxx stated the following in its review of In/Vertigo‘s self-titled EP: “

“Three for three — my friend Bruce‘s recommendations have been right on the money so far and all three bands are based out of western Canada, which I would have never thought of to be a hotbed for great hard rock / heavy metal music. I met my friend Bruce at a Famous Underground concert via my friend The Meister back in 2014. Bruce was/is a big Famous Underground fan as I understand that he flew in all the way from Calgary, Alberta to Toronto, Ontario for that show. Although I haven’t see Bruce since that time, we’ve kept in touch via Facebook and Bruce‘s recommendations of Striker and particularly Dextress during the last couple of years have been welcome additions to my music collection and for Sleaze Roxx to cover.

A couple of months ago, Bruce sent me a message stating that he wanted to send me the new In/Vertigo CD. I had never heard of In/Vertigo but let me tell you, this was one incredible band based on the four-song self-titled EP that I have selfishly been listening to on a regular basis for the past couple of months without letting you know about it until now.”