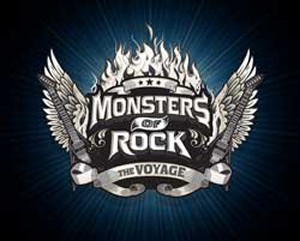 The inaugural Monsters of Rock Cruise (monstersofrockcruise.com) sets sail on February 25, 2012, and we want YOU on board with us for the hard rock/metal event of the decade!

Become part of music history as the tradition of the Monsters of Rock (themonstersofrock.com) festival is reborn, this time in the Bahamas aboard a luxury cruise ship with some of the greatest artists of the MOR era, including:

It all begins in Fort Lauderdale, Florida, sailing from February 25-28, 2012 aboard the MSC Poesia, destination Nassau, Bahamas, and Key West, Florida. The fun begins the moment you come aboard, meeting new friends poolside during the kickoff Sailaway Concert.

In addition to live music, the three-day cruise features a myriad of over-the-top special events, including the Monsters Rock & Roll Prom 1989, “So You Think You Can Shred” guitar competition, Shotgun Wedding Vow Renewal, artist meet-and-greets and much, much more!

Rock out at the face-melting music venues and events featuring our incredible artists on the Main Stage, plus the Monster’s Coffee Shop, Back-Alley Stage and Pool Deck Showcase for partying under the stars! You won’t want to miss Eddie Trunk from VH1’s “That Metal Show” as he moderates Rock ‘N Roll War Stories – up-close and personal Q&As with our artists. Finally, our other celebrity guest, Big John of “Rock of Love,” will be on board to keep the party going … like you’ll need any more encouragement!!

Cabin packages are already on sale (and going quickly). Book now and save $50 per person (through Aug. 31). Join us for the greatest floating ’80s heritage rock festival to ever sail the seven seas!

Visit monstersofrockcruise.com for full details and registration. Interact with MOR fans and cruise-goers at facebook.com/pages/Monsters-of-Rock-Cruise/144400955629944. Rock out even more at themonstersofrock.com.