Lynch Mob guitarist George Lynch has yet another project on the go as The Banishment are close to wrapping up their IndieGoGo campaign to raise funds for the recording of their debut album. 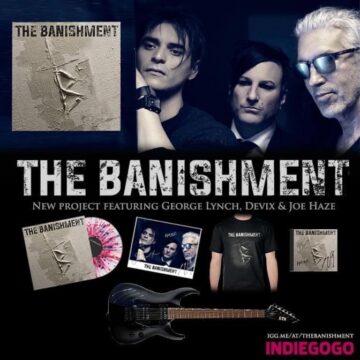 “Welcome to The Banishment‘s Indieogo crowdfunding campaign. We just released our first single, “Lost Horizon” and work continues on the full length debut album! We are offering many perks on this page to help fund the recording process, and manufacture vinyl, CD’s, and more. Some of these perks include a guitar signed by George Lynch, as well as guitar effects pedals which were used on the recording of the album and (also signed by Lynch). Most notably, we are offering some one-of-a-kind paintings that are a collaboration between both Lynch and Devix.

The Banishment is a three piece passion project and collaboration between guitarist George Lynch, programmer & multi-instrumentalist Joe Haze and LA based artist Devix.

Original recording sessions began in 2015 when Haze and Lynch set out to challenge themselves and charter new territories after living through two separate and already prolific careers.

Stepping out from behind the curtain Joe Haze has co-written and produced this new single with his first functioning band in over 10 years. Meanwhile, Lynch has been met with opposition pushing his creativity into darker, more subliminal and chaotic territories since the ’90s, finally together they’ve found a solid work flow and composed dozens of plausible album cuts.

After 5+ years of failed attempts auditioning various vocalists with names to street corner crooners The Banishment was close to being shelved or released as an instrumental project.

Enter “Devix Aka” (Devix Szell). Grinding teeth against metal in the Los Angeles underground with bands like The Narcosis Design & Symbolism (feat. original members of Christian Death & Samhain), Devix has been contributing to the self proclaimed #Dreampunk genre.

Through a series of chance meetings and name droppings at the 2019 Cold Waves Music Festival, Devix was introduced to Joe Haze, vetted and finally introduced to  guitar legend George Lynch.

Upon hearing the words “Dream Punk”. The project was creatively green lit by Lynch and the three have been collectively working around the unpredictable Covid 19 Lockdown restrictions.

Now with lyrics by Devix and full collaboration with Lynch and Haze... “Lost Horizon” is the first of many traxxx to come.  With your help, The Banishment will complete what is sure to be a memorable and important connection to the planet’s survival mechanisms and leave a mark in each artists’ respective catalogs.”