Back in early May 2018, Guns N’ Roses unveiled details of their various deluxe editions of Appetite For Destruction including a Locked N’ Loaded Edition mega-box priced at $999.00 and limited to 10,000 units. 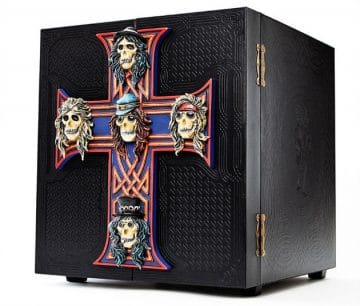 It appears that Guns N’ Roses have been unable to offload all 10,000 units as individual components of the Locked N’ Loaded Edition mega-box are now being sold separately.

“The ‘Locked N’ Loaded’ mega-box was created in the hope that 10,000 fans would be prepared to pay $1000 for a music box set that literally came in a wooden cabinet. You could hold it in your hands, but only just. Fourteen months on from the release, Universal Music have discounted this to less than $400 and furthermore, it appears they are actually breaking them up to sell off, separately, individual components that were once exclusive to the sets. Let’s take a look at what’s going on…

The US GNR Merch site is not only offering the ‘Locked N’ Loaded’ box for $399 but it also has for sale something called ‘Appetite For Destruction Hardcover Book + 4CD+ Blu-ray‘ which looks very much like the super deluxe edition, WITHOUT the outer slipcase and the ‘collectables’ (lithos, replica concert tickets, posters, temporary tattoos, flyers etc). The $49.98 pricing on this is curious, since the same site has the actual super deluxe edition for ONE CENT more – $49.99. Superfluous as those ‘collectables’ might be, you may as well get them for a cent!

This is where it becomes interesting though, because the same site also has for sale a set of 12 lithos (one for each song) for less than $20, a set of five metal band skull rings  for $39.98, a set of five metal guitar picks for $24.98 and a 32gb Metal Cross USB Stick With Audio for $39.98. What do all these items have in common? They were previously exclusive to the ‘Locked N’ Loaded’ box set!”

You can read the rest of the article and access the various links via the Super Deluxe Edition website.