INTERVIEW WITH ADAM SHORTREED OF A REBEL FEW
Date: May 22, 2016
Interviewer: Boppin

THERE ARE STARTING TO BE MORE AND MORE HARD ROCK / HEAVY METAL BANDS EMERGING FROM THE  SOUTHERN PORTION OF THE PROVINCE OF ONTARIO IN CANADA IN THE LAST FEW YEARS AND A REBEL FEW ARE AMONG THE LEADERS IN THAT REGARD. THE GROUP HAS JUST RELEASED ITS DEBUT ALBUM ENTITLED ‘AS THE CROW FLIES’ A MONTH AGO. SLEAZE ROXX CAUGHT UP WITH A REBEL FEW’S BASSIST ADAM SHORTREED TO DISCUSS MANY TOPICS INCLUDING ALL ABOUT THE BAND’S DEBUT ALBUM AND WHO IS CONSIDERED A D.I.R.T.BAG! 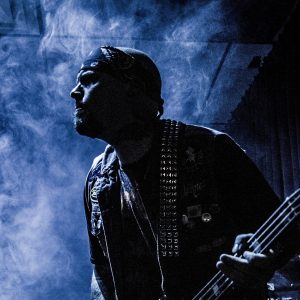 Sleaze Roxx: When did your band form?

Adam Shortreed: A Rebel Few was formed in 2013.

Sleaze Roxx: What do you do in your spare time?

Adam Shortreed: I am a professional tattoo artist and an avid gun collector.

Sleaze Roxx: What are you currently listening to?

Adam Shortreed: Currently, I am listening to The Cult, Dio and GnR’s ‘Appetite [For Destruction’].

Sleaze Roxx: Have you discovered any new bands lately?

Adam Shortreed: Black Stone Cherry is a killer band that I have never heard of until we were compared to them in a review [laughs]. I downloaded them and they kick ass!

Sleaze Roxx: If you could tour any country where would you go and why?

Adam Shortreed: Anywhere in Europe… I’m a big WW2 buff. The culture, history and architecture are something that we can’t even come close to having here.

Sleaze Roxx: Is there any news/rumours about upcoming shows or tours the public does not know about yet?

Adam Shortreed: We are currently planning a tour down south hopefully around October and are in talks with a few different people about some exciting stuff in the near future but obviously I cannot talk about anything until it is confirmed. We have recently been added to the WTFest in Brantford [Ontario, Canada] on June 25, featuring Billy Talent, Monster Truck, Saint Asonia, The Standstills, Ascot Royals. 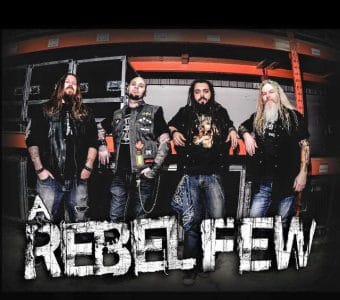 Sleaze Roxx: What was the first concert your band performed at?

Adam Shortreed: The first show we played as A Rebel Few, we were actually on the bill as West Memphis Suicide opening for Blu Bones at The Rockpile in Toronto.

Adam Shortreed: We’re a jam band so someone will come up with a riff or Raposo will have an idea and we just start jamming until everyone puts their mark on it. Raposo is a lyrical genius.

Sleaze Roxx: Did you learn anything about each other while making your album ‘As the Crow Flies’?

Adam Shortreed: Not really about us but we were lucky enough to learn a hell of a lot from [producer] Sterling [Winfield], with a bunch of great stories along the way.

Sleaze Roxx: Can your name one or a few artists or bands that are your biggest influences?

Adam Shortreed: Collectively as a band, we are all massive Pantera, Black Sabbath and Lynyrd Skynyrd fans.

Sleaze Roxx: What would be your band’s definition of “hitting it big time?”

Adam Shortreed: I feel like we have already hit it big time. If someone were to tell me in high school that I’d be buddies with Sterling Winfield and going to Vinnie Paul’s house for a BBQ, I would have said they were full of shit. Not to mention I couldn’t be more proud of the album we made! We have a loyal following of D.I.R.T. Bags and have been able to share the stage with many amazing bands.

Sleaze Roxx: A few examples of things in the Waterloo Region that best represent home to you and why?

Adam Shortreed: Family and friends… it’s just a great place to be surrounded by them. DB4L!

Sleaze Roxx: The new album was supposed to be called ‘New War’ for reasons relating to the band’s name change. Explain the reasoning for the actual title ‘As the Crow Flies’?

Adam Shortreed: ‘Guerra Nova’ [‘New War’] was one of the names going around in the beginning. That was one of the tentative titles that referred to the hurdles in the industry and our new frame of mind with how to eliminate them. The old school way of writing good music and letting the people decide. ‘As The Crow Flies’ was just a very cool southern saying that we felt really gave people a sense of our sound without hearing it. The saying refers to the shortest distance between two points which in the music biz is a mystical mindset because in our experience, there is no such thing! It’s hard work, dedication and passion. In true Rebel Few form, we had to throw our twist on it, so we had the crow dead with four flies surrounding it. Why we did that is up for interpretation. 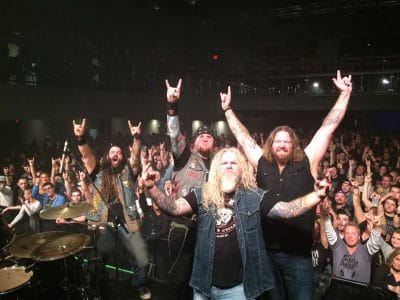 Sleaze Roxx: The new album began in 2014 and is released in 2016. Can you explain the length of time to release the album?

Adam Shortreed: Since we are not yet signed to a major label [laughs]! We had to be resourceful in raising the funds. It also took a lot of planning and scheduling to get [producer] Sterling [Winfield] up here and all of us down to Texas, but I think the end result speaks for itself so it was well worth it.

Sleaze Roxx: How has having Sterling [Winfield] and Howie [Weinberg] on the new album helped your band in terms of how you view recording an album and also in terms of exposure?

Adam Shortreed: When their names get mentioned, people tend to pay attention and Sterling truly believes in what we want to do with this album. He has been selflessly promoting us on his own time. As for recording the album, I was blown away by the attention to detail and skill level he has. His ear is a finely tuned tool.

Sleaze Roxx: On the new album you thank Brian Vollmer [Helix frontman], Bobnoxious, and Russ Dwarf [Killer Dwarfs frontman]. As a Canadian, I love the music all of these guys have done. Can you tell us a little about those guys and what they each mean to you?

Adam Shortreed: Brian was the first rock star I ever met when I was a kid. Helix came to a small record store in our town and he has been a big supporter of us since the beginning. Bobnoxious is a great entertainer and we have done tons of shows with him over the years. He has always given us great advice and shown us a good time. Russ Dwarf — what can you say? That guy is still a friggin’ animal on stage and has also been a wealth of information regarding this industry.

Sleaze Roxx: Can you describe your live show for those uninformed?

Adam Shortreed: Honestly, our live show is us having fun! We take our music seriously but on stage, we tend to joke around. We want everyone to see how much fun we are having and want everyone to be a part of it.

Sleaze Roxx: Can you tell us a story or two about some weird things you’ve seen on the road?

Adam Shortreed: Well, there was this one time in Owen Sound [laughs] that involved a girl and all the donuts in Tim Hortons…wait! I can’t tell that story [massive laughs]!

Sleaze Roxx: Do any of the members do anything to get psyched up before a show?

Adam Shortreed: Honestly, we’re pretty laid back until we hit the deck and then it’s game on! 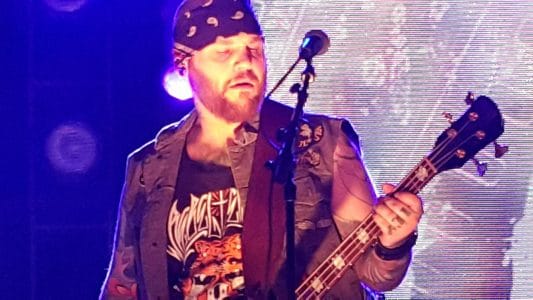 Sleaze Roxx: Your motto is “Driven Integrity Respect and Trust” and your fans are D.I.R.T.Bags. Can you explain the perfect example of a true D.I.R.T.Bag?

Adam Shortreed: A D.I.R.T.bag is someone who is always true to themselves and those around them. They refused to conform and always do what they know is right.

Sleaze Roxx: Other than Sterling Winfield and Howie Weinberg, are there any other producers/engineers etc. you would someday like to work with?

Adam Shortreed: No one knows what the future will bring but Sterling is family and I can’t imagine working with anyone else. I hope he will always be involved with us in one way or another.

Sleaze Roxx: The same with another band. If you could choose one band to work with, who would it be, why, and name one song you would like to perform with that band?

Adam Shortreed: Truthfully right now, with A Rebel Few, I get to play with my favourite band every night. If an opportunity comes up to play with one of our heroes, you damn well better believe we will be getting up there to rock out with them!

Sleaze Roxx: There is one guy from my local radio station [Editor’s note: Sleaze Roxx contributor Boppin is based in Kitchener, Ontario, Canada], 107.5 Dave Rocks, that keeps telling everybody how awesome your band is. I think you know who I mean. Can you give him a shout out, and tell us how much this type of stuff helps your band?

Adam Shortreed: It’s been great! We’ve been trucking along steady since day one, but when a legit radio station like 107.5 Dave Rocks and a badass like Darryl Law get behind you, there is a definite boom in exposure and local pride. All four of us have been getting non-stop emails and texts since they’ve started playing our songs. We can never show enough appreciation to Darryl for what he has done for A Rebel Few.

Sleaze Roxx: Lastly a question from my fellow blogger, Mike Ladano. Has the band ever run into any issues due to their tough, biker image? Booking clubs etc.?

Adam Shortreed: [Laughs] Not at all. We are who we are and I think within the first few seconds of talking to us, people realize we’re not going to trash the place. Respect goes a long way and that goes for bands and club owners alike.

Sleaze Roxx: Thanks Adam for taking the time to answer my questions. I wish you and the rest of the band all the success you deserve.

The official video for the song “Bitter Man” by A Rebel Few video shot and edited by Ryan Cannon Song recorded by Roman and Michael Zebik @ www.romansmusic.c…