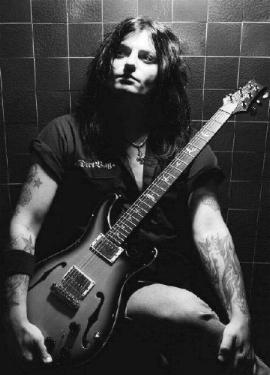 Guitarist Alex Grossi has played with some of hard rock’s finest, ranging from Quiet Riot to Beautiful Creatures and many more in between. He has recently reunited with Steven Adler in Adler’s Appetite, formed a new covers band called 100 Proof All-Stars as well as recording on Dizzy Reed’s upcoming solo album. How does he find the time? He doesn’t always, but Alex did give Sleaze Roxx a few minutes out of his busy schedule to talk about his current projects.

Sleaze Roxx: You just landed a gig with Steven Adler in Adler’s Appetite, how did that come about?

Alex Grossi: I had played with Steven on the 2004 “Bad Boys of Metal” tour and also did some one-offs with him later that year. We have been friends since, and I guess when it came time for him to put a line-up together, my name came up, a phone call was made and here we are!

Sleaze Roxx: Who else is in the band these days?

Alex Grossi: The line is a really solid-one that I have a great feeling about. I will be sharing guitar duties with longtime Adler alumni Michael Thomas (Faster Pussycat). We also have Chip Z’Nuff (Enuff Z’Nuff) on bass, Sheldon Tarsha on lead vox and of course, Steven.

Sleaze Roxx: I take it Steven is clean these days, do you worry that he might fall off the wagon when you hit the road?

Alex Grossi: There is always going to be that concern with anyone with a history of addiction, but he has surrounded himself with some really good people this time and has a very positive attitude and is the most happy when behind a kit, I think he will be just fine.

Sleaze Roxx: It’s probably premature to ask, but a few years ago Steven released an Alder’s Appetite CD. Do you think another one could be in the works one of these days?

Alex Grossi: It is very hard to tell at this point, we are just starting to get things together. I suppose anything is possible.

Sleaze Roxx: I see you are also working on Dizzy Reed’s solo album, how is that coming along and how big of a part will you play?

Alex Grossi: It is coming along great! The record is being produced by longtime GN’R associate, Del James. The lineup of players on this project is amazing and I can’t wait for its release. I was fortunate to work alongside of Mike Duda and Mike Dupke (W.A.S.P.); Adrian Young (No Doubt); Richard Fortus, Tommy Stinson and Frank Ferrer (Guns N’ Roses); Bobby Hambel (Biohazard); Todd Youth (Danzig, Murphy’s Law and D-Generation); Ricky Warwick (The Almighty); and my former Quiet Riot bandmates, Frankie Banali and Chuck Wright…just to name a few!

The songs are really good and because of the diverse selection of musicians and musical styles, it is going to be a very special record. As of today, I have recorded guitar on about 1/2 the songs, with more to come!

Sleaze Roxx: You also play with Dizzy in Hookers & Blow, does that band ever plan on recording new material?

Alex Grossi: Hookers & Blow is what it is, FUN! If we ever tried to record a record, we probably would end up with nothing more than a bunch empty beer cans and a bill from whatever studio we were in!

Sleaze Roxx: Speaking of Guns N’ Roses, have you heard their new CD and if so what do you think of it? 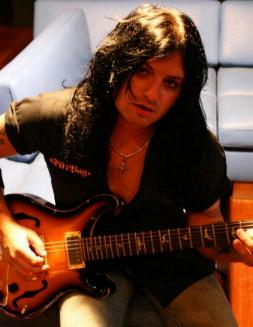 Alex Grossi: I think it is great! It’s so awesome to see it finally out there. I think my favorite songs are “Better” and “Street of Dreams”, but I have only had it a week…

Sleaze Roxx: You also just started up a covers band called 100 Proof All-Stars, tell us how that came together.

Alex Grossi: The ‘100 Proof All-Stars’ was actually started a couple of years ago in L.A. by Jizzy Pearl (Love/Hate) and Stacey Blades (L.A. Guns). We just decided that since we all have down time now and again, why not? Playing music and traveling is what we do best.

Sleaze Roxx: People will be saying to themselves, “why do we need another of these cover bands?” What is it about the 100 Proof All-Stars that makes it different than the many other cover bands out there?

Sleaze Roxx: With so many of these ‘all-star’ type bands forming, I have to wonder. Do the musicians make pretty much the same amount of money playing covers as they would original songs, and are the crowds to the gigs similar as well?

Alex Grossi: It all varies from gig to gig. The main reason for these ‘bands’ is for musicians to stay active and avoid the dreaded ‘Day Job’. The crowds vary as well, sometimes people come out for the curiosity factor, sometimes because they are a die-hard fan of one particular ‘All Star’ and some come because they get to see musicians they are a fan of in a looser, more care-free element, which these types of bands tend to breed.

Sleaze Roxx: Is there anything new in the works for either Bang Tango or Beautiful Creatures?

Alex Grossi: You will have to ask them. Although I am still friends with Joe LeSte and co., we no longer work together.

Sleaze Roxx: Why do you think a band like Buckcherry was able to have so much success, and a similar sounding band like Beautiful Creatures went largely unnoticed? 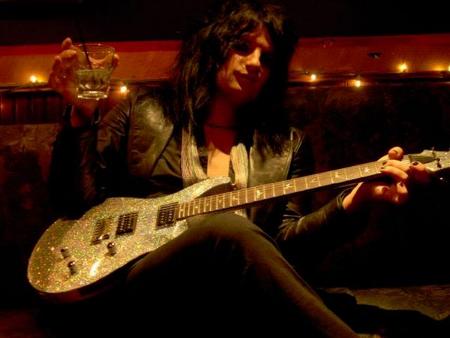 Alex Grossi: Timing, label support and luck. Beautiful Creatures should have been bigger, but the label was pretty much done on the promo end by the time the band finished Ozzfest from what I am told…and unlike Buckcherry, Beautiful Creatures never got a second shot on a major label with the big machine behind it. Although ‘Deuce’ (Beautiful Creatures’ second record) was released worldwide, it didn’t have a fraction of the juice that Buckcherry had behind it.

Sleaze Roxx: What else are you working on these days?

Alex Grossi: I have been doing some writing as well as teaching at my families’ music school in Connecticut. Most of my time is spent going to a gig, playing a gig, or leaving a gig though….

Sleaze Roxx: With all these different bands on the go, how do you find the time?

Sleaze Roxx: The one year anniversary of Kevin DuBrow’s death just passed. What are some of your favorite memories/stories about your time with Kevin?

Alex Grossi: We had a lot of laughs together in the time that I knew him, they were ALL my favorite. He is greatly, greatly missed.

Sleaze Roxx: What about life on the road with Kevin and Quiet Riot, what was that like?

Alex Grossi: Kevin and Frankie taught me a lot, and made me grow up pretty quickly. They were consummate pros and never phoned it in, as they took the music very seriously, which kept everyone on their toes. It was extremely organized and very educational. I often call Frankie for advice given his very logical approach to this crazy business, and because we are still close friends.

Sleaze Roxx: Do you think Frankie Banali will ever resurrect the Quiet Riot name without Kevin? 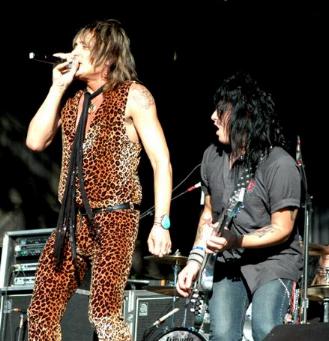 Sleaze Roxx: Having worked with people like Steven Adler and Jani Lane before, do some of their previous troubles with substance abuse keep you on the straight and narrow?

Alex Grossi: I am not going to lie to you, I have not always been on the straight and narrow, not by a LONG SHOT, but most people (entertainers or not) haven’t been. Fuck… our new president used to do ‘blow’! I have had a ‘scared straight’ experience or two and I think you can only learn by other people’s mistakes as well as your own.

Sleaze Roxx: What were your personal ‘scared straight’ moments?

Alex Grossi: Just realizing your own mortality and how fast everything can change, there is a certain feeling of being invisible when you are traveling from town to town with your friends, raising hell and playing rock and roll. When that suddenly and tragically changes, you tend to re-think your lifestyle.

Sleaze Roxx: Lots of hard rock bands returned this year with albums and tours, what is your opinion on the state of hard rock these days?

Alex Grossi: I think it is great to see ‘rock’ back in the mainstream, with ‘Rock Band’ and ‘Guitar hero’ introducing kids to the genre, I had an 8-year old student ask me to teach him a Dio song!! And with bands like Hinder and Buckcherry selling millions of records in today’s market, I think we are just fine.

Sleaze Roxx: You’ve played in several bands that have returned without many of the original members. What do you think about bands doing that, or bands like L.A. Guns that have two versions out on the road at the same time?

Alex Grossi: People need to realize that there is a reason for each and every case of ‘replacement’ or ‘scab’ members joining established acts. Whether it is because someone now has two kids and a desk job and doesn’t want to tour, or because of the always popular ‘creative differences’, there is usually a good reason bands go on without the beloved ‘original line-up’. The bottom line is, people need to make a living and if it means we have six versions of (insert band name here) playing at (insert big summer rock festival here)…oh well. Turn on CNN, things could be worse.

Sleaze Roxx: I understand the need for a paycheck, and music is a business. But in some cases don’t you think the fans are the ones getting the shaft?

Alex Grossi: I think if they are promised something, pay for it, and then it’s not what it was ‘advertised” then yes, the fans are getting the shaft. But as long as the artists, booking agents, promoters and club owners are honest and straight up about who or what is in fact performing or NOT performing, then it is up to the consumer to chose who they want to spend their money on. It is then up to the artist to give them their monies worth!

Thanks to Alex Grossi