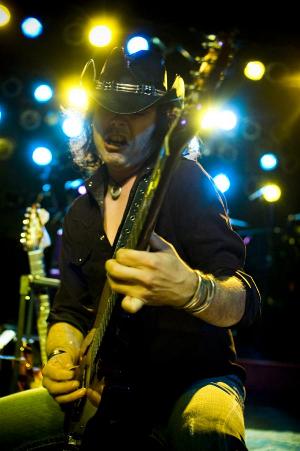 Anthony Gomes is considered one of the best young blues guitarists, along with Eric Sardinas and Joe Bonamassa, on the scene today. A true road dog, Anthony plays well over 250 shows a year in his never-ending quest to spread his message of love, hope, and unity through his unique blend of music. Having been on the scene since 1998, he has won the Buddy Guy Legends award for Best Unsigned Blues Band. Since that time he has released five albums to critical and fan acclaim. The best way I can describe one of his shows is it is a whiskey-soaked, Southern Baptist-esque Church Tent Revival on 11!! Through his relentless touring he has amassed an extremely dedicated and passionate legion of fans appropriately dubbed ‘The Love Vibe Tribe’. After time constraints derailed his scheduled sit-down interview in Wichita, Kansas on September 29th, Justin ‘Crash’ Crafton caught up with Anthony after his exhaustive yet successful trek to Europe via email. If Anthony comes to your area, I highly recommend you catching one of his live shows. On February 19, 2008, Anthony will release his first ever live album simply entitled ‘Live’ via Ruf Records. Do yourself a favor and check Anthony out when he comes to a town near you and don’t forget to grab a copy of his new CD ‘Live’ at www.anthonygomes.com!

Sleaze Roxx: Was guitar the first instrument that you took to as a kid and when did you get your first guitar?

Anthony Gomes: Guitar was my first main instrument and I started playing at 14. I wanted a computer, but my Dad got a guitar instead. Thanks Dad!

Sleaze Roxx: How were some of your earliest influences in music and how old were you when you first discovered ‘The Blues’?

Sleaze Roxx: You recently returned from a trek in France. How did the tour go and how is Frenchy doing?

Anthony Gomes: The tour was great, but pretty intense, 15 shows in 17 days. It was great to spend an afternoon off in Paris. Frenchy is doing very well!!!

Sleaze Roxx: You are originally from Canada. When did you come to the U.S. and what prompted the move? Was it a lack of a blues scene in Canada or something else?

Anthony Gomes: I moved to the U.S. because this is where it was happening. There is a great music scene in Toronto, but the music I am playing requires that I be here. It’s sort of like if you want to be a hockey player you go to Canada, a chef goes to France and an actor goes to Hollywood. You find the place where you can grow.

Sleaze Roxx: In 1998 you won the Buddy Guy Legends “Best Unsigned Blues Band” competition. How did it feel to receive such recognition from one of the greatest bluesman of all-time?

Anthony Gomes: It was an honor. I felt it was sort of like the passing of a torch. Buddy had some very encouraging words to say as well.

Sleaze Roxx: When you were younger and first discovering ‘the Blues’, if someone would have said that one day you would share the stage with the likes of B.B. King and Buddy Guy or that Eric Clapton would attend one of your shows, what would you have said?

Anthony Gomes: No way! Let’s build a time machine and go there now!!!!!

Sleaze Roxx: Your sound is a mixture of Blues, Hard Rock, Soul, Funk, and Gospel. Who from those genres has influenced you along the way or is your sound just a result of stuff you were exposed to by your parents?

Sleaze Roxx: Soon after winning the Buddy Guy competition, you released your first album, ‘Blues In Technicolor’. Any memories from the making of the album or the subsequent tours stand out in your mind?

Anthony Gomes: I remember a lot of great shows in Memphis, Nashville and Detroit, just working hard and trying to build a fan base.

Sleaze Roxx: Your second release, ‘Sweet Stringin’ Soul’, was a rather gutsy move in that it was an all-acoustic album. Did you encounter any resistance to its making or release? 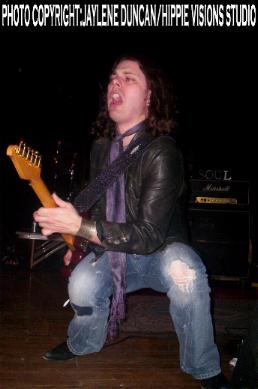 Anthony Gomes: It was met with a great deal of critical acclaim. It was something I had to do to prove that I was multi-dimensional. Some people got bummed when I returned to the electric thing. Following your artistic gut or heart isn’t always gonna win you a popularity contest But, while I was making it people thought I was out of my mind, artistic suicide was a term that was thrown around.

Sleaze Roxx: ‘Sweet Stringin’ Soul’ is such a fan favorite to this day, do you ever think of those who doubted or criticized it and think, “Ha, showed you…here is some crow, enjoy!”?

Anthony Gomes: There’s probably a little of that. More so, it gives me courage to follow my musical path.

Sleaze Roxx: Your third release, ‘Unity’, showed a tremendous amount of growth sonically and within the writing. It received a lot of critical praise and rave reviews. What do you attribute that to?

Anthony Gomes: Hard work. Also I started to allow myself to be more free with my influences. Prince was an inspiration. He could do whatever he wanted artistically with no apologies. Thanks Prince!

Sleaze Roxx: You’ve worked with the likes of Jim Peterik, Jim Gaines, Kelly Keagy, and Mark Selby (a native of Kansas!). Do you plan to continue collaborating with them in the future and is there anyone you would like to work with that you haven’t had the chance to yet?

Anthony Gomes: Yes. I would love to work with Daniel Lanois.

Sleaze Roxx: It has been just over a year since you released ‘Music Is The Medicine’. How have sales and the overall reaction been towards the album?

Anthony Gomes: We stayed in the Blues Top 15 on Billboard for over three months. It still hits the charts regularly. It is one of the best selling Blues CDs of the past year. It’s my favorite yet.

Sleaze Roxx: You also released, in very limited quantities, an album entitled ‘Long Way Home’ as a 5 for $50 promotion in conjunction with ‘Music Is The Medicine’ (meaning if you bought five copies of MITM, you received a copy of Long Way Home as well). Was there any thought given to just releasing it along with MITM as a double album or holding off for a year or so after MITM’s release and issuing it then? Who came up with the creative marketing concept of the 5 for $50 deal?

Anthony Gomes: We couldn’t release two CDs at once or do a double so we had to be creative to get the music out there. I would love to see it be officially released someday.

Sleaze Roxx: It has been said that during the ‘Music Is The Medicine’ sessions that something occurred with the computer hard drives that almost lost all the work that had been done and that computer techs had to be called in to retrieve the work. What exactly happened and how close did that experience come to derailing the entire project?

Anthony Gomes: It was a long way home. Basically there is a glitch using Pro Tools that involved working on a session with two variations of Pro Tools. The same thing happened to Toby Keith, the track started vanishing. It was a race against the clock to get things done. We lost about five songs.

That’s why I wrote Long Way Home. I went to the studio to work on songs that weren’t there. We had nine done, we needed at least ten. So I wrote it and recorded it there on the spot. That, along with Bluebird, are my two favorite songs I’ve written in the last four years that have been recorded.

Sleaze Roxx: Longtime bassist Biscuit Miller recently left the group. Why did he decide to leave and is there any chance of working with him in the future?

Anthony Gomes: I don’t know what the future holds. All I know is that we are brothers!

Sleaze Roxx: You recently added bassist David Karns and drummer Peter Lang to the band. How did you find these wonderfully talented gents?

Anthony Gomes: Fate, destiny and Jeri Hart. Jeri is the lady who makes David’s and my straps. We met at this year’s Super Bowl party.

Sleaze Roxx: There had been talk over the last year of a possible co-headlining tour with Eric Sardinas & Big Motor. Is that still a possibility and how much longer do you plan on touring for ‘Music Is The Medicine’?

Anthony Gomes: We would love to tour with Sardinas. We’ve talked about it, but nothing serious ever really happens be cause we’re both so busy. I think if someone did the legwork to organize something we’d both be on board. We are going to stop touring behind Medicine when our new live CD comes out. Then we will tour behind that one. [laughs]

Sleaze Roxx: At the New Years Eve 2006 show in Springfield, MO. it was announced that the first three albums would be re-issued in the following months with expanded artwork and track listings. What is the status of the re-issues?

Anthony Gomes: Business red tape, but it will happen. There are some cool bonus tracks out there.

Sleaze Roxx: Any special memories of that NYE 2006 gig that you’d care to share? I attended that show and I’ll just say that show’s atmosphere was unlike any other Anthony Gomes Band gig I have attended… in a good way!

Anthony Gomes: NYE is always a beautiful time to reflect on the past and embrace the future.

Sleaze Roxx: A few months back the band recorded some shows in Nashville for a live album. When can the ‘Love Vibe Tribe’ expect it to be released? Is there any chance of a live DVD in the future?

Anthony Gomes: The live CD should be out early next years. The Nashville shows did not record very well. A live DVD…who knows?

Sleaze Roxx: I’d like to thank you for your time and say that Jay & I look forward to seeing you when you return to Wichita in December!! Anything you’d like to say to all the members of the ‘Love Vibe Tribe’ that may be reading this?

Thanks to Anthony Gomes and Justin “Crash” Crafton. Special thanks again to Jaylene Duncan & Hippie Visions Studio for use of her photography and artwork!