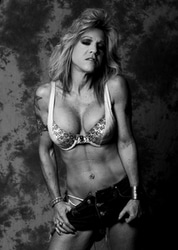 Anyone who was into the 80’s metal scene, and that would probably include you, will undoubtedly remember “Bitch,” led by the charismatic powerhouse Betsy Bitch. Just because you may not have heard about her lately doesn’t mean she isn’t still out there breaking hearts, and shattering craniums, in one dangerous swoop. As a matter of fact, she has her hands quite full lately. In addition to sculpturing her physique, she is still holding the reins of her own band, “Bitch,” and is the new vocalist of theatrical-metallers “Witch”, another mainstay of the Hollywood club scene. Miss Betsy Bitch found some time for a little Q & A session with Bruce Forrest, bringing you up to date on what she currently has going on.

Sleaze Roxx: Tell me about your latest “Bitch” line-up. I see original drummer Robby Settles is still aboard.

Betsy Bitch: A couple of years ago, [original “Bitch” drummer] Robby Settles and I decided to reform “Bitch” to record and play some gigs. Original guitarist, David Carruth, no longer wished to continue with the band. “Bitch” was always running thru bass players, so Robby and I recruited two guitarists, Jay Dean and Steve Kara, and bassist Steve Gaines, who plays with “Abatoir,” “Anger as Art,” and “Bloodlust.”

Sleaze Roxx: Are you the permanent lead singer of “Witch” now or are you filling-in for [original vocalist] Peter Wabbit?

Betsy Bitch: I am a permanent replacement for Peter, if that makes any sense. “Witch” has played three gigs with this lineup, which is myself, Ronny Too, on guitar, Jim Warmon on bass, and Punky Peru on drums. We kicked ass, and got a rousing audience response. I love singing their music and working with them immensely. We have several gigs booked in L.A. in April, and are discussing doing some recording of new “Witch” material in the near future.

Sleaze Roxx: How much free publicity did you get from the Tipper Gore incident, in which she held up the “Bitch” album cover for the press and quoted some of your lyrics?

Betsy Bitch: That was the best publicity “Bitch” ever got. Ms. Gore carted around the “Be My Slave” album wherever she went to speak on behalf of the P.M.R.C. I never thought my image, in all my S & M regalia, would show up on CNN, at a televised congressional hearing. I never thought I’d hear distinguished congressmen recite the lyrics to “Gimme a Kiss” [“Kick me in the shins/slap me across my face”]. That “Warning: Adult Content” sticker we had to put on our releases really promoted our record sales.

Sleaze Roxx: So, who are your musical influences?

Betsy Bitch: Alice Cooper and Cheap Trick. Alice, because he is the consummate front-man, playing a character, as I do with “Betsy Bitch.” Cheap Trick, because Robin Zander is, hands down, the best vocalist ever in rock and roll. Their material is superior, as well as some of the best song-writers in the business.

Sleaze Roxx: You come off as the ‘Bad Ass’ metal singer, but do you ever think about doing an album that steps away from your ‘image’ and doing something completely different? 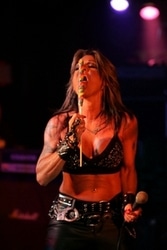 Betsy Bitch: I am a versatile singer, and while I have not actively sought-out anything other than rock and roll, I would not be aversed to checking out other avenues, but my heart belongs to rock and roll.

Sleaze Roxx: What ‘un-metal’ like hobbies, or interests, do you have that may surprise your fans?

Betsy Bitch: I think they may be surprised to know I am a great cook, a kind and considerate person, and a bit of a sensitive femme fatale at times. Is it lame to say I am also an “I Love Lucy” fan?

Sleaze Roxx: “Bitch” had a light S & M tone to the band. Was this simply used as a gimmick, or is it something you truly have a fascination for?

Betsy Bitch: That’s the first time I’ve ever heard our S & M image called ‘light’. It was something that was evolved once “Bitch” started writing bondage-themed songs, such as “Live for the Whip,” “Leatherbound,” or “Be My Slave.” Then, we realized that it would make for great entertainment, and theatre, when playing live, in terms of giving our audience a visual, as well as a kick-ass metal sound during our gigs.

Sleaze Roxx: Is “Bitch” back together for a fun side project, or are you going all out to get back onto the music scene? It seems, musically, there is starting to be a slight emergence of more melodic/’80s inspired rock.

Betsy Bitch: First, let me clarify, that ‘back together’ is incorrect. We never broke up. Just, as they say, on ‘hiatus’. We still do gigs, European festivals, recording, which is what we are doing right now. I agree with you about the coming-back of the melodic metal scene, and I think “Bitch” is ripe for the picking. So, yes, there is definitely a new-found interest in that genre. “Bitch” is sounding better than ever. I am singing, and looking better than ever, so we intend on striking while the iron, or metal, as it were, is ‘hot’.

Sleaze Roxx: Did the name “Bitch” help or hurt? Were any of the major labels interested, but perhaps put off by the name? 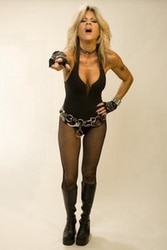 Betsy Bitch: When we first started out, in the early 80’s, I think the name “Bitch” was more taboo than it is today. As a matter of fact, one gig we had, at “The Troubadour”, had to be billed on the marquee as “Pitch,” so as to not piss-off the West Hollywood Chamber of Commerce. But nowadays you hear the word ‘bitch’, even on daytime television. We changed the name to “Betsy,” experimentally, for one release, to see if that band name might afford us more commercial acceptance. In the long run it didn’t seem to make any difference, so we went back to the original band name.

Sleaze Roxx: Ever think about doing an exercise DVD? It would be a bit different than the usual approach, with your rock and roll image. And just how much time do you work on those abs?

Betsy Bitch: That’s funny, you’re not the first person to suggest that, a heavy metal work-out DVD. I don’t know if I could verbalize what I do in order to instruct other people. I work out an hour and a half a day. I do 3 sets, of 40 stomach crunches. I have had no body cosmetic surgery, except for my boobs. No lip or tummy-tuck. What you see is all hard, diligent working-out results.

Sleaze Roxx: Have you seen “Rock of Love Bus,” and what is your opinion on that show?

Betsy Bitch: The VH-1 producers actually called me in for an on-camera audition for that show. Now that I see it, I am so glad I didn’t get chosen. I am not a catty pole-dancer, and that’s obviously what they were going for, in terms of the girls that were chosen. I didn’t gush about Bret Michaels when asked questions about him. When they asked me why I would be good for the show, I gave them the rhetoric, about how we are both rockers, both front for bands. I didn’t say, “Oh, Bret’s so hot, I would do him in a second.” I guess that’s what they wanted to hear. With his previous “Rock of Love” seasons, the rejected girls were sent home from a mansion. But, this time, they’re on a tour bus, so what do they do? Dump them off, on a street corner in Idaho, or something?

Sleaze Roxx: How about a show where you do a version of “Rock Bus,” but with wanna-be male rockers competing to win you over?

Betsy Bitch: Yeah, that and the exercise video. Hey, you should be my agent.

Sleaze Roxx: Did you ever get negative feedback, from female rock fans, though, of course, not female fans of “Bitch,” that were jealous of you, or perhaps thought your image was degrading to women? 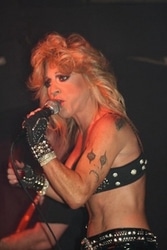 Betsy Bitch: I used to, when the mentality was more of that mind-set. But, now, I get a lot of “You go girl,” and “Keep rockin’.”

Sleaze Roxx: Did you often encounter, or still encounter, male fans that assumed, based upon some of your actions on stage, that you would be “easy to approach”? Did you ever encounter male fans that became ‘stalkerish’?

Betsy Bitch: When “Bitch” first started out and not a lot of people knew who we were, a lot of guys would write me, and ask me to be their dominatrix. You know, come over to their house, hang them from the chandelier, and whip their rear-ends. I also get a lot of ‘hits’ on myspace, from guys who, when they see my provocative photos, assume I am ‘putting myself out there’ for dating, hooking up, yahoo-chatting. But, I politely write them back and tell them I am an entertainer, and I am about self-promotion. When they get nasty, and perverted, I simply delete them and block them from ever communicating to me again.

Sleaze Roxx: What is your opinions on today’s music, these kids that have one guitar lesson, and think “Hey, now I’m ready to start a band.”

Betsy Bitch: Just don’t listen to it. But, to each their own. Everyone has choices or what they wish to play, and what they choose to listen to.

Thanks to Betsy Bitch and Bruce Forrest.