Bill Leverty shot to fame during the closing moments of the hard rock invasion as Firehouse’s guitarist. With some spare time between Firehouse tours, Bill recorded his second solo album; an instrumental CD entitled Southern Exposure. In this interview conducted by Sarah, Bill talks about Southern Exposure and the motivation behind it.

Sleaze Roxx: Southern Exposure is your second solo album, how do you balance your solo work with your work with Firehouse?

Bill Leverty: This is a side project, so I do it in my free time. FireHouse is on tour all year, so it’s pretty hard to get “free” time to work on any other projects because FireHouse is the top priority. I have to come home off of the road and really motivate myself to get to work again. It can be a challenge. The album is available right now on my website: www.leverty.com.

Sleaze Roxx: Your first solo album was with vocals and your songwriting, yet your latest album is instrumental. How or why did you choose to go instrumental on this album?

Bill Leverty: I’ve always loved instrumental music, especially with the guitar as the primary instrument. I was very influenced by guys like Jeff Beck, Steve Morse, Allan Holdsworth, Al DiMeola, and many other instrumental guitarists. I’ve always wanted to put out an instrumental album but never had the songs. I recently was picked up by a new guitar company called Grem Guitars and they’ve put out my signature guitar. They asked me if I’d be interested in doing some clinics to demonstrate the guitars and I thought that I should write a few songs to show how great these guitars are.

Well, after I wrote three songs, and had such a great time writing and recording them, I figured that if I recorded another seven songs, I’d have an album. I certainly didn’t make this album to try to make money. In fact, there is no way to market this music. The audience is out there, but letting the audience know that this album is available is next to impossible. This was a labor of love and if I make my recording costs back, I’ll be happy.

Sleaze Roxx: Your first solo album, Wanderlust, was released a few years ago, what was or is the reason behind the distance between the albums?

Bill Leverty: The main reason is that I’m so busy with FireHouse touring. I also have a family which I try to spend all of my free time with, so finding the time to write, record, and mix an album can sometimes be hard to do. The mixing of this album took about 3 times the amount of hours than the actual writing and recording. I wanted the album to sound consistent in every sound system out there. This was a big challenge.

Sleaze Roxx: Your solo music has a different sound than your work with Firehouse, what influences your music when it’s just you to make the decisions on the album? 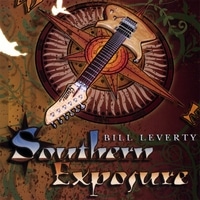 Bill Leverty: I just follow my heart. I go into the studio with an open mind and I just write. I don’t try to fit into any particular market, genre, or radio format. I know that this is probably not the best way to do it from a business standpoint, but I don’t write any music with the thought of trying to sell albums. I just want to write something that I’m really going to be proud of and enjoy playing. I also wanted to make this album with live drums and not sound replaced with any drum samples at all. I really wanted to capture Michael Foster’s amazing drumming.

Sleaze Roxx: With Southern Exposure you’ve created songs that you can put any story to, and it creates that warm feeling. Is there one song on this album that holds more meaning or a story that you think of every time you play it than others?

Bill Leverty: They all have different moods or vibes that I think of when I listen, mostly about the events that were going on in my life when I wrote them. For example, “The Valley Of The Kings” was written right before I took the family to Philadelphia for a vacation where we saw the King Tut exhibit. I was trying to come up with a title that would describe the sound of the music. On the way into this amazing collection of artifacts, there was a short movie telling everyone in our group where they found all of these tombs. The place was called “The Valley Of The Kings” and I thought that would be a great title for that piece of music. Other songs on the album got their titles from other things that were happening in my life at the time. They mean more to me than they would to other people, but I try to make the title fit the music in some way.

Sleaze Roxx: Do you have any plans on a tour to support this album or is this a side project area for your music that you write that doesn’t work with what Firehouse is doing. Or is it a hobby that you do to keep your mind creating and developing within your guitar playing?

Bill Leverty: It’s a side project. I would love to tour on this album, but it would be extremely selfish of me to tell the other guys in FireHouse to figure out another way to feed their families while I go out and promote my “solo career”. One day, if FireHouse takes some time off, Id love to play a few gigs, but until then, my solo material is not yet available in live format.

Bill Leverty: I always wanted to release an instrumental album, and I’ve had a lot of fans encouraging me to do so. I just never had the material written that I thought was good enough. There are so many great musicians out there making such amazing music. I needed to feel in my heart that I had material that was ready. I just started off with the goal of writing and recording three songs. After I finished the first one, I couldn’t wait to start working on the second, then the third, then it just took off. I really just wanted to let the guitar do all of the singing this time. The verse and chorus melodies are hopefully memorable and will draw in the listener, and then when the song gets to the solo, I can shred a little bit more since I’ve already established some guitar melodies.

Sleaze Roxx: What has been the fans’ reaction to your solo releases, both Wanderlust and Southern Exposure?

Bill Leverty: I’ve been very fortunate to have received nothing but extremely positive reactions from everyone on both CD’s. I think that many people have enjoyed hearing me in a different setting than what they are used to, and hopefully, these albums will shed a new light on me as a singer, songwriter and guitarist.

Sleaze Roxx: As a guitarist, does an instrumental album hold or have more value than a regular album to you? What does Southern Exposure mean to you?

Sleaze Roxx: If you were to do another album, and could chose one other guitarist to join you on the recording and creation of the album, who would that be and why?

Bill Leverty: Steve Morse because he’s the greatest. I’ve never heard anyone play like him, but the real genius of Steve Morse is his writing. His work with the Dixie Dregs and on his own is nothing short of one masterpiece after another. I have never had more respect for any other artist than Steve. I’ve also met him a few times and he always remembers me and is so cool. Last time I saw him backstage after his Deep Purple gig, he stopped (on his way back to the dressing room) and talked to me for about 15 minutes. How cool is that!?!

Sleaze Roxx: Did you discover or find that creating an instrumental album was more of a challenge than your other albums?

Bill Leverty: Yes, this was much more of a challenge. I have always used the vocal melody and a lyric to establish the theme of a song. This is the first time that I’ve tried making the guitar and the supporting music do it all. This type of writing requires more changes and movement to keep the listener from getting bored. I’m still learning quite a bit about the different ways of doing this. I hope that one day I’ll be able to write an instrumental song that’s as identifiable as “Frankenstein”.

Sleaze Roxx: What’s next for you as an artist and as a guitarist? What goals do you want to accomplish as a player?

Bill Leverty: I don’t know. I just love music. I hope to make more instrumental and vocal albums in the future in-between FireHouse projects and touring. Right now, I’m enjoying working with other musicians by mixing, engineering and producing their music. I just want to keep this going without having to go out and get a real job.

Thanks to Bill Leverty and Sarah