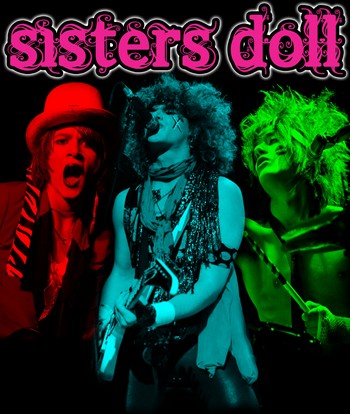 Sisters Doll is a new glam rock band that has emerged from rural Western Australia. The group is made up of the three Mileto brothers — Brennan 19, Bryce 17 and Austin 14 — who have a clear understanding of the history of their genre and where they want to go. The music is loud… the music is sleazy… and their new album, ‘Welcome To The Dollhouse’, presents a new (and fresh) entry into the glam genre. Sleaze Roxx had a chance to interview Brennan of Sisters Doll and discuss not only the new album, but also their brotherly dynamic, image, and a road story that ends with the band on the side of the road, looking like drag queens.

Brennan Mileto: The band is made up of three brothers and we all grew up listening to the ’70s and ’80s rock ‘n’ roll — all thanks to our Dad’s collection. The music has always been in our blood and we always jammed to KISS songs in our music room. We then landed our first gig and from there we just haven’t stopped. We have been going strong for three years.

Sleaze Roxx: What’s the rock scene like in Australia these days?

Brennan Mileto: The rock scene is not too bad here in Australia, but the scene has gone real ‘Indie alternative’ and has been that way for a while now. Where we are from in Western Australia, we are from the most isolated city in the world (Perth) and we live two hours from Perth in the country so it makes it a bit harder. The rock scene, especially glam rock, is not as strong and is mainly underground. We are trying to bring back the glam!

Brennan Mileto: We always try and write together as much as we can — however, we generally do a lot of solo writing. Generally one of us will bring in an idea and we all work on it together. Nine times out of ten it’s a group Sisters Doll effort.

Sleaze Roxx: Obviously image is important to the band, but how much does image/style influence your music?

Brennan Mileto: Yes, the image is a big part of our band and an influence in our music. Our main focus is to bring fun and excitement back into the music industry with enormous big stage shows, pyros, drop curtains, and confetti bombs. We feel our generation hasn’t experienced a whole lot of that ’70/’80s glam era, and it needs to come back.

Sleaze Roxx: Who are some of the band’s influences in general, and also from the glam genre?

Brennan Mileto: Our biggest influence would have to be KISS because we virtually grew up on KISS. But we have so many other influences — for example Firehouse, Motley Crue, Van Halen, Alice Cooper, Twisted Sister, New York Dolls, Poison, Aerosmith and Ratt. Just to name a few (laughs).

Sleaze Roxx: Bands often refer to their band mates as ‘brothers’, but you are actual brothers. I have two brothers myself so I know how it goes down. How much fighting is there? Have you had any full blown Oasis stage fist fights?

Brennan Mileto: (Laughs) Yeah we have our occasional fights, but it hasn’t led to fists or punches yet. Nah, we are generally really close brothers and we all get on great, so at this stage it’s all good… for now!

Sleaze Roxx: Let’s talk about your debut album ‘Welcome To The Dollhouse’. Do you have any favorite tracks on the album?

Brennan Mileto: Yeah the album has been growing on us all and you kind of make your choice by what mood you’re in that day. But I would have to say our favorites would be “Dollhouse”, “Loaded Gun”, “Falling”, and “Holly Dolly”. Actually, we can’t just pick a few on the album — we love them all!

Sleaze Roxx: Bands often have a few songs that sound better live, which songs from ‘Welcome To The Dollhouse’ will leave fans walking away from the venue wanting more?

Brennan Mileto: Yeah that’s so true, as we are only a three piece and on the album we added some extra guitar parts, effects and so on to make our album more exciting. It’s hard to emulate the whole album live but we have worked really hard to make our songs as close to the album as possible when we play them live. If we had to choose the best ones we do live we would have to say “Dollhouse”, “Falling”, “Holly Dolly”, “Isabella” and “Run Away”.

Sleaze Roxx: I really enjoyed “Isabella”, were the lyrics based on a personal experience?

Brennan Mileto: Thanks for that comment about our song “Isabella”, we really appreciate it. Yeah the song was made up on a personal experience but the name “Isabella” is totally random. It was originally going to be called “Cinderella” but we changed it to “Isabella”.

Sleaze Roxx: The video for the single “Dollhouse” is a throwback to ‘actual’ videos. Was it as much fun making it as it is watching?

Brennan Mileto: Yeah it is, isn’t it? Yeah, it was a full on experience that we filmed in twelve hours from 3pm until 3am. Believe it or not the night went so quick, but we enjoyed every minute of it and wouldn’t change anything. All the extras in the clip were our close friends and family so it was a fun team effort and it was an exciting experience for everyone involved.

Sleaze Roxx: What has been your favorite venue/performance so far?

Brennan Mileto: Definitely when we got the great opportunity to play at the Whiskey A Go Go in Los Angeles and the Hard Rock Cafe in Hollywood. Those two venues are so iconic and just to be on those stages was a special moment for us and we can’t be more grateful.

Brennan Mileto: We were on our way to a gig — all glammed up ready to go, and then bang went the tire of our trailer and we thought “oh shit”, but it was only the tire so that should be pretty easy. Then we went to look at the tire and the whole trailer axel had snapped, causing the wheel to burst and the trailer to almost tip. So we pulled over, un-hooked the trailer and dad drove up the road to go get help, leaving Sisters Doll stranded on the busy highway in broad daylight dressed up in glam, make-up, and leather jackets. Yeah we looked like drag queens (laughs).

Sleaze Roxx: If you could tour with one band who would it be and why?

Brennan Mileto: Without a doubt, most definitely, KISS, because they are our number one inspiration and we just love everything about them. We grew up listening and admiring them and we would love that opportunity — we are praying for that day!

Sleaze Roxx: One stage anywhere… where do you choose to play and why?

Brennan Mileto: Definitely Madison Square Garden in New York City. The Garden has been the ultimate dream and goal for Sisters Doll since the beginning. It’s such an iconic arena and everyone has played there and we know once we have played the Garden then we know that Sisters Doll has made it (fingers crossed).

Sleaze Roxx: Where would you like to see the band go (i.e. move forward, eventually reach a certain status)?

Brennan Mileto: We have a lot planned for 2013. We are coming to America again, this time for Rocklahoma in May, and in August we have a six week college tour scheduled for the states. We also want to tour and promote ‘Welcome To The Dollhouse’ and Sisters Doll, as well as getting further exposure in Australia. We continue to write and plan to get our second album out by late 2013. It’s a fun loving roller coaster and we are just enjoying this awesome ride. Also be on the lookout for some more singles and film clips from our debut album ‘Welcome To The Dollhouse’.

Brennan Mileto: We would just like to say thank you to Sleaze Roxx for your support. It really means a lot for people like you to take the time and effort to support upcoming bands like us and we really appreciate it and hope to see you when we come back to the States. Keep rocking Sleaze Roxx and ‘Welcome to the Dollhouse’!