GRAVEYARD BBQ HAVE BEEN AROUND FOR A DECADE CREATING “DIRTCORE” HYBRID MUSIC, SLAMMING TOGETHER BLUES AND HARD ROCK INTO SOMETHING ALL THEIR OWN. SLEAZE ROXX HAD A CONVERSATION RECENTLY WITH BROWNBAG JOHNSON ABOUT THE BAND, THE NEW EP ‘RX FOR SX’, RON JEREMY AMONGTS OTHER THINGS. JOHNSON IS A BBQ FANATIC AND IT SHOWS! 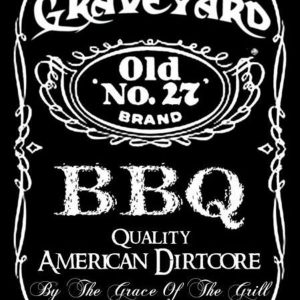 Sleaze Roxx: Thanks for taking the time to chat with Sleaze Roxx. What’s going on? Anything new at the ol’ BBQ Pit?

Sleaze Roxx:  ‘Rx for Sx’ is a killer EP. Great stuff. I understand Graveyard BBQ is Brownbag Johnson —  essentially a one man band originally based in Massachusetts. You play all the instruments on the new EP?  How did that work in the studio and how do you handle live gigs?

Brownbag Johnson: Yes sir! I create, craft, perform, and co-produce all Graveyard BBQ songs and dirtcore “recipes.” The band was originally formed in 2003 in my hometown of Waltham, Massachusetts [outside of Boston] and was actively playing shows and touring as a full band all the way up ’til 2010 when there was a bit of a disconnect and “hiatus.” At that point… I decided to move on, relocate to L.A, and continue on as a one-man band to keep carrying the torch… Rest assured…. A new Graveyard BBQ “full band” touring line-up will be announced soon!

Sleaze Roxx:  Graveyard BBQ defines itself as “dirtcore” with a great description in your EPK, listing everyone from blues great Robert Johnson to Pantera. Brownbag — Dimebag — any relation? And the last name Johnson? Any relation to Robert?  That’s quite a mash up! 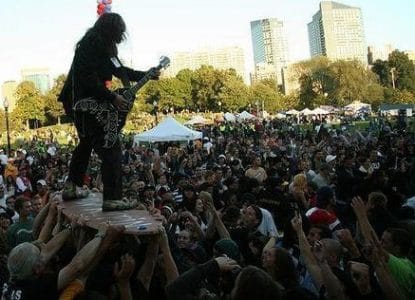 Brownbag Johnson: Ding! Ding! We got a winner! Yer absolutely spot on with that. Both Robert Johnson and Dimebag are huge influences on me, and when you put those two together, you certainly get a good chunk of the essence that makes the “King of Sling” Brownbag Johnson. But, there’s a lot more to it than that. The dirtcore sound and style is a sonic recipe inspired by sex, booze, blues, & rock n’ roll infused with a lil’ country and metal, and marinated in the key ingredient… slide geeeetah!

Sleaze Roxx: In his review in 2013, former Sleaze Roxx editor Skid described “The Raw, The Rippin, & The Righteous” as “Like a spaghetti western revamped to outrageous proportions by Quentin Tarantino.”  In the past, you’ve done some killer covers, like “Who Do You Love” or Fleetwood Mac’s “World Turning.”  This time around, its Jimi Hendrix’ “Fire.”  How do you choose which covers to do, and what’s the inspiration?

Brownbag Johnson: I generally only cover classic rock and old blues songs because you can make them sound bigger, better, and ballsier. And, I carefully choose the covers that fit with the overall theme of the album, and that I know I can put my own  dirt core twist and flavor on. For example, “World Turning” [by Fleetwood Mac] is a pretty heavy emotional blues song that totally fit the vibe of ‘The Road That Lies Ahead’ so it really helped tie in that whole concept with the rest of the original songs which are essentially all blues & inspirational songs. And, of course I knew I could make it sound waaaaay bigger than the original! On “Creamskull Boogiez” — the party / booze EP album — I did covers of ZZ Top’s “Beer Drinkers & Hellraisers” and the Steppenwolf classic “Born To Be Wild” for the sole purpose that they are fun, anthematic, party and drinking songs that sound epic as you slam down some beers and continue to turn that volume knob all the way up! Like all BBQ songs [laughs]! There’s a lot of songs I could have done that would have fit the whole sleazy “sex” theme of “Rx for Sx” but I settled on “Fire” [by Jimi Hendrix] because a) its about sex, and b) It fucking smokes!!! [laughs]

Sleaze Roxx: You mentioned to me earlier that ‘Rx For Sx’ was part of an EP “trilogy.” Can you explain a bit about what you were going for as a series of albums stretching back to 2013? 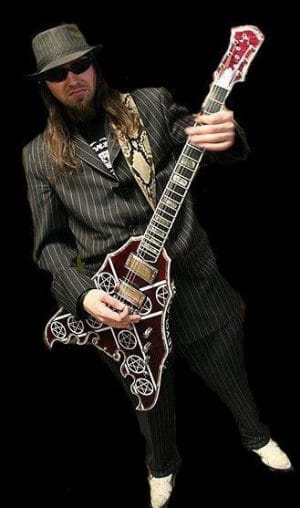 Brownbag Johnson: It’s actually a “quadrilogy” consisting of four concept album EP series — “prequels” of the ‘Greatest Hits Vol. 1 & 2′ albums — that might even turn into a “sex-tology” [laughs] with the overall themes being “sex, booze, blues and rock n’ roll.” Each EP album has its own identity, concept, and vibe which all represent different flavors and ingredients of the overall “dirt core” sound & recipe. The four EPs in question are:

Sleaze Roxx:  OK. I get they have different themes, but why four similar-sounding EPs spread over four years instead of one full length album?

Brownbag Johnson: Each EP has its own flavor and concept as previously mentioned above. Also, being a one-man band and D.I.Y [do it yourself] operation, it was much easier for me financially to manage a budget for each EP with less songs, which equals less time and money spent in the studio. And, creatively… it allowed me to really hone in and focus on making a handful of songs the absolute best they could be rather than over-filling my plate so to speak. The EP series is the prequels to the “Greatest Hits Volume 1 & 2” albums. Ya see…. we started at the top, and there’s only one way to go from there….. backwards…. [laughs]!

Sleaze Roxx:  As we speak, I’m listening to Graveyard BBQ’s ‘Greatest Hits, Volume II’ and I sense a different sound from the later EPs. It was heavier without such an obvious blues influence. How has your sound evolved from the 2000s into this decade?

Brownbag: Although I did sing on a lot of the ‘Vol. 2′ stuff, there was a different lead singer [Scott Campbell a.k.a “Howlin’ Jack”] as well as a different producer/recording engineer. Those guys were great for Graveyard BBQ at that time but, like anything… once you remove an ingredient or two from a recipe, yer gonna have a lil’ bit of a different taste and chemistry. Right now, I sing and play guitar, as well as record everything myself in the studio on this EP series, and will continue to do so in the future. And, my new co-producer / recording engineer / mix master known as “The Wizzzzzzz” Chris Collier has been a huge difference maker in the overall production and sonics of these new albums. I absolutely love it, and I’m grateful to have him in my corner. But, regardless of member and producer changes, I would like to think that there’s certainly been a great evolution and continuity in the dirt core sound from the beginning of the band’s inception ’til now… with the one constant being me. It’s been a D.I.Y operation since day one. I created the band, have written all the songs and lyrics, do all the artwork design, have produced and co-produced all albums, etc. so I’ve always been the main creative and driving force behind the whole thing. Dirtcore Records is also my label that all Graveyard BBQ albums have been released under. It is what it is. I believe my God “grill” has been telling me, “Brownbag Johnson….. yer the muthafuckin’ ‘King of Sling!’…. it’s yer time to shine boy, so go git it!!!” [laughs]

Sleaze Roxx:  “Ride the Stache” seems to be one of your most prominent songs, first appearing on ‘Greatest Hits Volume II’ and again on ‘Rx For Sx.’  Apparently, Ron Jeremy has been seen wearing a “Ride the Stache” t-shirt. Is he a fan? 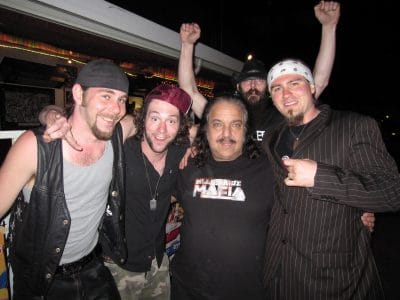 Brownbag Johnson: Yeah. We were on the road supporting ‘Greatest Hits Volume 2′ and we played the world famous Whiskey A Go-Go in Hollywood. After the show, we went up the street to The Rainbow [famous rock n’ roll bar) and ran into Ron Jeremy. We had a couple drinks with him and told him about the band, and gave him a “Ride the Stache” t-shirt. Next thing ya know…. we’re back home after the tour a couple weeks later and a friend of ours saw Ron rockin’ the t-shirt in his latest porn flick [laughs]!! It was the ultimate compliment “cummin'” from a legend like him.

Sleaze Roxx: You wrote some great new originals for Rx.  Why did you choose to repeat “Ride the Stache” on a new release?

Brownbag: The brand spankin’ new, opening originals… “Interlube”, “Gimme Some Sugar, Mama”, “Hotdog Man”, and “Organ Grinder” are certainly the “featured” jams on the album. But, I see what you mean with “Ride The Stache” being re-released on the album along with that artwork being the front cover and all. The only reason I did that is because the album is obviously the “sex” themed release of EP series and there’s not a more bad fucking ass Graveyard BBQ design that “fit” this album more than the “Ride The Stache” design. And, my thought process was if I’m gonna use that design, I might as well just re-release and include the song “Ride The Stache” to help tie everything together. The album has a really nice flow from start to finish… the soundtrack to sex, sleaze and dirtcore at its absolute finest!

Sleaze Roxx:  I have to ask you about the two short tracks on ‘Rx For Sx.’ “Interlube” is gratuitously obvious. Does the poor girl ever finish? But “Entresmission” sounds like something straight out of the GTA video game, like it would show up when I change radio stations in a car.  There has to be a story behind that, and more than just “Five Cents To Ride The Stache!” 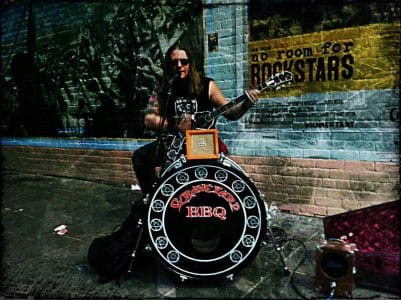 Brownbag: [Laughs] Of course she finishes. She always finishes [laughs]. I’m the “Hotdog Man” baby!!! “Entresmission” was also originally released on the ‘Greatest Hits Volume 2’ album that served as an intro to “Ride The Stache” to help build it up into the romper of a BBQ jam that it is. The idea at the time — which might eventually still happen — was to make an epic “Entresmission” / “Ride The Stache” music video in the vein of an old school ’80s MTV / David Lee Roth-esque long, funny intro before the song kicks in and makes them ladies wanna throw down every red hott nickel they can find! [Laughs] It was all done in good fun with good friends. We all had a lot of fun doing those skits, and recording that album. It’s three seperate skits with the obvious overall theme being “Five Cent Mustache Rides” 1) You have a car salsesman, “Big Willy” a.k.a Big Bill Campbell telling ya all “Ya need to do is throw ‘five cents’ down to get a red hott ride!!! 2) You have a monster truck radio announcer a.k.a Dougman announcing the “W.W.M.R.O. — “World Wide Mustache Ride Off”, and 3) A 1-900# phone sex operator seducing you to call for the “Ultimate Red Hott Ride”. Classic, sexy, sleazy, artistic creations!

Sleaze Roxx:  Your cover of AC/DC’s “Dirty Deeds Done Dirt Cheap” and another original song “Cheat On The Church” sound familiar, but where have I heard them before?

Brownbag: “Dirty Deeds Done Dirt Cheap” is our AC/DC cover featured on the ‘Greatest Hits Volume 2’ album. And, “Cheat On The Church” which is featured on our debut album ‘Greatest Hits Volume 1′ — you might have heard or remembered from that lil’ ole’ videogame called, Guitar Hero. We won the national “Be A Guitar Hero” contest to have “Cheat On The Church” featured as the only unsigned band/artist on the game’s legendary song list/soundtrack. Check it out!

Sleaze Roxx:  Thanks for your time to chat. Any final words?

Thanks Sleaze Roxx!, Yallz the best. And, thank you for yer support. To all ya newcomers out there… Welcome to the BBQ nation! If you ain’t with us, yer against us!

All Graveyard BBQ Songs can be heard on the BBQ Nation Youtube Channel.

All albums and songs are available digitally thru iTunes, and all other digital music destinations.

For physical CDs and merchandise: www.graveyardbbq.bigcartel.com