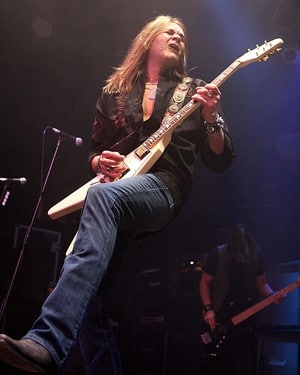 If you would have told me five years ago that Carlos Cavazo would be playing alongside Warren DeMartini in Ratt, I would have said you’re crazy. Maybe I shouldn’t have been too surprised, because Ratt landed John Corabi, right? Exit Corabi and enter former Quiet Riot guitarist Carlos Cavazo, who to his credit fits in perfectly. Recently we were granted an opportunity to interview Carlos Cavazo as well as an opportunity to listen to the upcoming Ratt album Infestation. It’s Ratt doing what they do best, playing their brand of hard rock or ‘Ratt ‘N’ Roll’ if you will. Infestation will not disappoint, it’s throwback to the glory days of Ratt. Let’s get to the interview shall we?

Sleaze Roxx: Shortly after John Corabi left Ratt your name was mentioned as a potential replacement. How did you land the gig and did you have to audition?

Carlos Cavazo: I did go through an audition process. I think the guys just wanted to check me out, as you can probably guess I got to know the guys during my time in Quiet Riot. Anyway, they just wanted to see what I looked like these days. I hadn’t seen them in about ten years and I could have been 500 pounds for all they knew. Funny story about the audition, as I wrapped my audition the first day, George Lynch and Zakk Wylde were in the studio too! I thought they were there to audition. We were trying to keep it quiet that I was auditioning and I run into those guys. As it turned out they were there rehearsing with their respective bands and they happen to be there at the same time as us.

Sleaze Roxx: Did you have to think twice about getting involved with Ratt?

Carlos Cavazo: Not really, I mean I know there’s problems coming into a band that has been around for twenty plus years. To be honest I was actually hoping that I’d be picked up by a band from the same era as Quiet Riot. In my mind it would be a great fit to be in a band with guys that are from my era and my group. There’s really no problems, I seem to fit in better with Ratt than I ever did in Quiet Riot I think. To tell you the truth there are way less problems in this band than with Quiet Riot.

Sleaze Roxx: Quiet Riot and Ratt came up around the same time, where you friendly with them? They were the competition after all.

Carlos Cavazo: Yeah, I met Robbin Crosby and got to know him way before I got to know any of the other guys oddly enough. I used to hang out with Stephen Pearcy a lot in the ’80s, I didn’t meet Warren DeMartini until the early ’90s I think. Warren was actually the guy that called me about the vacancy. He got my number from Vinnie Appice at some club in L.A. that they hung out at. So I knew all the guys and got to know them throughout the years.

Sleaze Roxx: Were you given equal opportunity to write for Infestation? You wrote the new single “Best Of Me” didn’t you?

Carlos Cavazo: I did bring in “Best Of Me” as an idea for the album. I think I was given fair opportunity to write. I brought in three song ideas, we all submitted three songs actually, and we picked the best of the batch, I got lucky because one of the ones that I brought in (“Best Of Me”) was picked as the lead single. I wrote the music and Stephen wrote the lyrics to it. Everyone had a hand in making the song what it is. I certainly couldn’t have done it without these guys.

Sleaze Roxx: I’m curious, the riff on “Best Of Me” sounds eerily familiar, not in the sense that it sounds like a retread, but it has that classic Ratt sound to it. Was that intentional on your part? 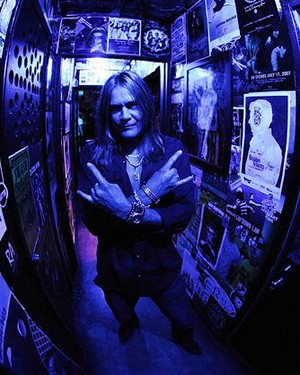 Carlos Cavazo: Well, thank you. When we were writing for the album we talked, and the goal was to come up with stuff that was true to the classic Ratt sound and come up with great new songs that weren’t ’80s sounding but could also fit in with what is current today, and I think we did a pretty good job in that regard. I think we have a good ’80s sound with new great songs, is what it is to me. It kind of fell into place because we are from the same era, everything just fell into place. Warren and I love the same guitarists, we like the same stuff, there’s chemistry there and I think you can hear it on the album as well as live.

Sleaze Roxx: How was it working with producer Elvis Baskette, who has worked with Nu-Metal bands, and how did you narrow it down to him?

Carlos Cavazo: Warren and Bobby Blotzer selected him I believe. I liked working with him, he had a lot of great ideas. He got the best out of us that’s for sure.

Sleaze Roxx: How different is it going from a band where you were the lone guitarist to sharing duties with Warren DeMartini?

Carlos Cavazo: It was strange when I first came into the band. I was just learning the lead parts for some reason. I had to go back and relearn everything. I was so used to being the sole guitarist that it was new. With Ratt’s music there’s two guitars constantly playing something and the parts I learned were the ones that I played off the top of my head when I heard the record. Those were Warren’s parts I guess! On the new album we both share leads, I think he plays more of them than I do, about 10% more. When we recorded the solos we were both in the studio together and when we had an idea we’d lay it down. Some of the solos we even did together, like the harmony parts, and some of them he’d play at the beginning, I’d take the end or the middle, and likewise.

Sleaze Roxx: So it was whatever fit the particular song then?

Carlos Cavazo: Yeah we’d talk about it a little bit. ‘You do something here, I’ll do something there’, stuff like that.

Sleaze Roxx: How are the solos being divided up in live setting? I ask because I haven’t seen Ratt since you joined. 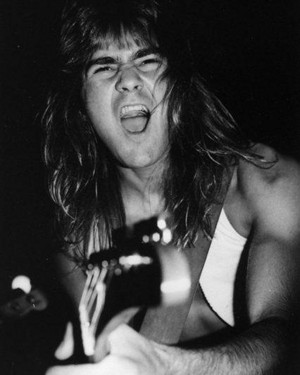 Carlos Cavazo: Basically Warren was giving me all of the solos that Robbin would do live and couple others. I’d rather have him do the solos on the older stuff because one, they are his, and two, that’s the stuff that people remember when we play the songs and they want to hear that. I’m a different type of player and I have a different sound, I can’t say they’d sound exactly the same as how he’d do them, you know.

Sleaze Roxx: Without a doubt there’s likely a summer tour in the works. There’s a rumor that you guys will be hitting the road with Cinderella? Can you confirm that?

Carlos Cavazo: We haven’t looked into anything yet. They’re tossing around different things. There has been talk about doing something with Cinderella, Scorpions and possibly Aerosmith. We’re not sure right now, so I can’t give you a definitive answer right now as far as who we’ll be going out with. We’re just throwing a few things out there and we’ll see what we come up with.

Sleaze Roxx: Fair enough. What are a couple of standout tracks on Infestation?

Carlos Cavazo: On the new record? One of my favorites is a song Bobby Blotzer brought in, “Look Out Below”, and I obviously like the stuff I brought in. I also like one that Stephen and Warren brought in, the only slow song on the album, it’s called “Take Me Home.” It has a really good feel to it and I’ve been listening to that one a lot lately.

Sleaze Roxx: What about two classics that you really love playing live?

Carlos Cavazo: A classic that I really enjoy playing live is “Lay It Down.” I really, really like that song. 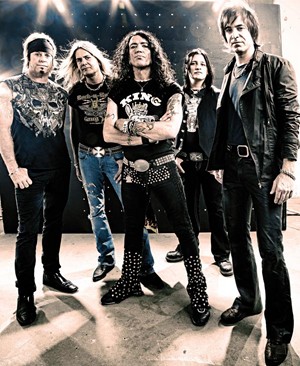 Carlos Cavazo: I’ve always had a great relationship with Rudy, I love Rudy, he’s like my best friend. I had a falling out with Frankie and Kevin DuBrow there at the end, and Rudy as well. I don’t wish anyone any ill will, they’ve been my friends for 25 years, they’re like my family for half my life. I just felt, for me, it was time to move on. I hadn’t spoken to this guys… I hadn’t spoke to Kevin for four years prior to his death. Last I spoke with Frankie was at Kevin’s funeral service, we’re not on a speaking terms Frankie and I. I do wish him the best you know.

Carlos Cavazo: My brother does a couple things these days. He plays in a country band with actor W. Earl Brown who starred in the series Deadwood. He plays in his backing band Sacred Cowboys. He also has a couple of rock bands going on at the same time. He’s staying busy that’s for sure.

Carlos Cavazo: Yeah, he is. I still hope to do something with him in the future. I still jam with Tony and Steve Cuadros of the band Snow, the band that I was in before Quiet Riot.

Sleaze Roxx: Which leads me to this question. Is there a chance that Snow will ever do anything together again?

Carlos Cavazo: We talk about that every once in a while, we’re not going to reinvent the wheel or nothing like that. We might do a couple of reunion shows and play some of the old songs and reminisce with some of the old fans. There’s nothing in the works at this time, we talk about it and it will likely happen down the road I’m sure. We’ll have to find a singer, he’s AWOL and I think he’s had some health problems and I don’t think he could do it anymore.

Sleaze Roxx: With that I thank you and before I go I’d like to say that Infestation is a solid album.

Carlos Cavazo: Thank you for your support and definitely come out and see us this summer.