Sleaze Roxx recently caught up with drummer Carmine Appice, who is promoting the latest King Kobra album simply titled ‘II’ on Frontiers Records. “I think by calling the album ‘II’ it brings the second coming of King Kobra full-circle,” says Carmine Appice from his home in Connecticut. “I don’t know if we’ll ever get an opportunity to play live. I’ve done some live shows in Europe with Paul Shortino and he’s a monster vocalist and performer, I can only imagine what we’d be able to do if King Kobra hit the road.” While the music business has been turned upside down since the last time Appice and company were able to tour he’s still hopeful that he can get the band on the road and play to the fans that enjoy King Kobra’s music. ‘II’ is a strong effort that picks off where the self-titled album left off — and then some.

Sleaze Roxx: I didn’t think it was possible to top the last King Kobra record because you set the bar so high, but I think you did.

Carmine Appice: I know! I was pleased when we were done with it. That was our plan, to make it better than the last one. We didn’t intentionally go after a particular style, we went with what we like to play. Dave Henzerling would push Paul Shortino to write better lyrics and Dave wrote some lyrics himself. We set the bar even higher on this record I think.

Sleaze Roxx: Bands from the era that King Kobra came from that reunite don’t always issue quality music, but you’ve done that twice now. I think the only band that has issued a strong album was Ratt — King Kobra has the edge because you have two records since reuniting to their one.

Carmine Appice: Wow, in all the interviews that I’ve done for this album no one has put it that way — thank you. I have been making records for years — I don’t think there’s been a record that I’ve made that sucks. I always make sure that it’s a great record, it doesn’t matter if it’s a Cactus record or a King Kobra record or a Travers/Appice record. I have certain standards and if it doesn’t meet those standards then why do it, you know?

Sleaze Roxx: In this day and age everything is recorded digitally. How did you guys approach the recording of ‘II’?

Carmine Appice: We did it the same way we did the last one — we recorded the drums analog then everything else was done digitally. It worked the last time around so we didn’t want to mess with things.

Sleaze Roxx: I know the intention the last time around was to make an album that sounded ’80s.

Carmine Appice: Yeah, well when Frontiers signed us they specifically said they wanted an album that sounded like the King Kobra of the ’80s. I had recorded an album in the ’90s with Kelly Keeling on vocals that was modern sounding and was a little grungy — they didn’t want that. They wanted a hard rock metal sounding album like King Kobra did in the ’80s. On the last record we also had five songs that were left over from the ’80s so that helped in continuing with that style. We had “Screaming for More,” “Midnight Woman,” and a couple more.

On this album we started from scratch. I had a few songs on my iPad and two of them wound up on the record. I had a song titled “Have A Good Time” on my iPad — we took the title, kept the chorus, and made a totally new song out of it. We’d send files back and forth to one another and we’d record guitars, bass and then when we had everything recorded we sent the whole thing to Michael Voss in Germany and he mixed it. He put those little accent sounds in there like the train on “Hell On Wheels”, the animal roar on “Running Wild” and that little ‘om bop-bop’ thing at the beginning and end of the Johnny Rod song. There’s stuff all over that record that be added — he listens to the record and he has fun with it. When we got it back we were like, ‘oh man that’s cool!’ We didn’t know what he was going to do.

Sleaze Roxx: You’ve made it very difficult to pick a definitive favorite track on the album because it kicks off with a strong “Hell On Wheels” and ends strong with “We Go Round”. I have to say that I really love “Got It Coming” — it’s a ballad and here you are adding all these little accents and just crushing it on drums.

Carmine Appice: I love it! We approached that as a heavier Police kind of song. I originally wanted to add a guitar solo where the bridge is but I was out voted by Dave and Paul. Johnny Rod came up with a really cool bass line for that song. The whole thing just came out great. We wanted a song that could compete with “Live Forever” off the last album which is a single type song. I mean, if Bon Jovi did a song like that it would be a hit! It’s a great song. Unfortunately unless you’re Bon Jovi nothing happens.

Carmine Appice: I came up with the original concept for that song in the early to mid ’90s. I did an early version of that song with Pat Travers. Dave and Paul heard the demo of it and we changed it around a little bit and made it different.

Sleaze Roxx: “We Go Round” is another great tune on the album.

Carmine Appice: “We Go Round” was probably the last set of lyrics that we wrote for the album. That changed drastically during the writing process, I can’t even begin to tell you how many versions we had of that song to get to it what you hear on the record. We took our time writing because we had an October 2012 delivery date for Frontiers, which we met, and the album wasn’t going to be released until this summer so we had time. I would have liked to have had more time but I’m glad we had a deadline — we made the most of the time we had. I work better with deadlines.

Sleaze Roxx: Paul does this Steve Perry like vocal on that song which I really enjoy. 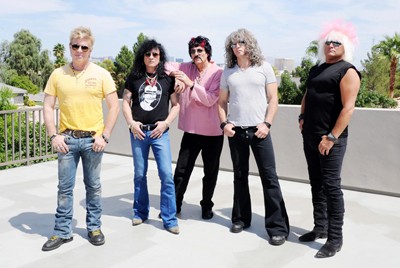 Carmine Appice: Yeah, it’s a great song and the storyline is great too. Frontiers didn’t like it when they heard the original version. I liked the final version, it’s got this kind of punk rock riff — it’s ‘epic’.

Sleaze Roxx: Speaking of ‘epic’, you have a song called “Deep River” on the record which has this Zeppelin “Kashmir” vibe to it. Tell me about that song.

Carmine Appice: It is epic. “Deep River” and “We Go Round” are the two epic tracks on the record. We wanted it to be like a Blue Murder song, like “Valley Of The Kings” meets Whitesnake’s “Still Of The Night.” When the bells kick in it changes to a totally different kind of song with the acoustic part, then we added a gospel chorus to it. We did tons and tons of vocals to make it really big — it’s really epic.

Sleaze Roxx: I know King Kobra would love to promote this album with some live shows in the United States in 2013, but it’s hard for rock and metal bands to hit the road unless it’s a festival appearance or a package tour of some sort.

Carmine Appice: King Kobra never sold millions of records. I will say that these last two records that we’ve done are better than anything that King Kobra ever did early in our career. Back in the day we might have sold 200,000 copies of our second one worldwide, then probably 125,000 worldwide of the first one. It wasn’t big numbers — we never sold-out 5,000 seat venues or sold millions of records or got 40 to 50 grand per night like a lot of the bands that are still big right now. It’s really difficult to make the finances work. I was offered three festival appearances in Europe — I tried to get the guy to increase the amount because the amount that he had offered wouldn’t have even paid for the flights to get six people to Europe. He said “I’ll get you hotel rooms, but it’ll have to be three guys to a room.” Come on (laughs)! I’m not gonna put three guys to a room! I’m 66 years old, give me a break (laughs)! I’ve had a long legendary career, I’m not gonna do that and lose money on top of it as well. If there was a tour offered where we’d make a little bit of money for two to three weeks, even if we only broke even, we’d probably do it.

Until, if, and when that ever happens, we hope to continue to make records for the people that will buy our records. We don’t make a lot of money — Frontiers’ budgets are very small. The fact of the matter, with the amount of time that I and the rest of the guys put into this record, we probably made $2-$3 per hour — if that. It’s not about the money it’s about the creativity, making music and keeping the name alive.