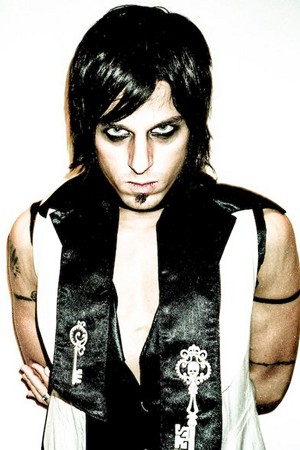 The Last Vegas made their first appearance on Sleaze Roxx back in May of 2009 when their album ‘Whatever Gets You Off’ was reviewed. The CD received critical acclaim from rock critics and fans alike, even going on to take first place in the Sleaze Roxx Top 10. In June of that same year I had the pleasure of speaking with The Last Vegas frontman Chad Cherry, who was very excited about the band’s touring plans, their involvement with Eleven Seven Music, shooting music videos and the positive reviews that their album had received.

Fast forward to November 2011 when I caught up with Chad Cherry again to catch up on all things related to The Last Vegas. Since I last spoke with Cherry & Co. they had toured with AC/DC, Buckcherry, and Motley Crue; shot several video clips for ‘Whatever Gets You Off’; toured some more; and finally, started work on a new album. As a teaser for their upcoming full-length, The Last Vegas released an EP entitled ‘The Other Side’ on November 22nd via CM Distro. ‘The Other Side’ contains five tracks, produced by Chicago based Johnny K who recently worked with Megadeth on their new album ‘Th1rt3en’, highlighted by the three hard rockers “The Other Side”, “Evil Eyes” and “It Ain’t Easy” and an interesting video for the title track starring B-movie Queen Sybil Danning.

Sleaze Roxx: ‘Whatever Gets You Off’ was released by Eleven Seven Music, which has ties to Nikki Sixx of Motley Crue. Are you still signed with them?

Chad Cherry: Well, we signed a one record deal with them. We are currently working with Century Media who have released the EP ‘The Other Side’. It sounds like we may do something with Eleven Seven in the future, but I don’t have too many details. At the moment all communication has been done via email. Century Media, if you’re familiar with them, are a kick-ass heavy metal label.

Sleaze Roxx: So is ‘The Other Side’ a teaser to set up the new album coming in 2012?

Chad Cherry: Our approach is similar as to how you’d release a movie — you can take the EP as the trailer for the movie, or in this case the new album. Right now we are hoping to have the album in February (2012). We’ll be in Europe at that time, but we hope to shoot another video so we can use it as ammunition for our European tour.

Chad Cherry: Yeah, we had recorded those tracks by ourselves. Then Nikki discovered us and he loved the record, so we remixed the album and we cut 4-5 new songs with Marti, DJ and Nikki in Burbank, California.

Sleaze Roxx: Did they influence the direction stylistically of the new songs you cut with them?

Chad Cherry: No, not at all. We refined some of the tunes — I’m not married to a song, so I’m open to hearing ideas that would make a song better.

Sleaze Roxx: You brought in Chicago native Johnny K to produce the EP and the upcoming full-length album. It’s an interesting pick since he’s better known for his work with bands on the heavier side.

Chad Cherry: Johnny’s a great dude, we were excited to work with him being that he’s from Chicago and we’re from Chicago. He does a lot of heavy metal, but he does a lot of other stuff too. Sometimes people get branded as a ‘heavy metal guy’ or as an ‘active rock guy’, that might have happened with Johnny but he’s so much more than that. I bring up his name to other musicians and they turn white! (laughs) I think that’s because he runs a pretty tight ship — he’s not afraid to let musicians know that their music isn’t going to work out. I think that’s why they turn white because that kind of thing messes with them a little bit. 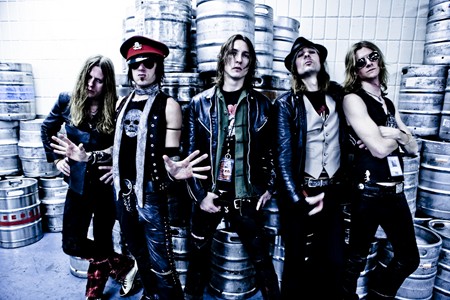 We had a great time working with him. We’d sit and talk in the studio for a little bit then get to work. We ran rampant in the studio for about a year which was, as I said, a lot of fun and probably very expensive! (laughs) We worked with one of the best in the business and that’s how we see it. It was also good for us, I think, to get another perspective on songwriting from Johnny. If we’re working with pretty good people — it’s going to be really good record.

Sleaze Roxx: On ‘The Other Side’ you’ve tweaked the sound a little bit — not too much, but you can hear that you’ve evolved as a band. This isn’t contemporary rock, but it’s also not a complete throwback like the last album.

Chad Cherry: I think the last record that we did had a little bit of that throwback sound to it… I guess, I’m just going by what other people have said. I just think that anything we’ve ever done is the sound of us being stuck in the ’70s — I don’t understand the ’80s throwback that people have mentioned. I think as long as people are talking about us its fine by us.

I think the new record is much rawer — more punk rock. I think that’s the best way to describe it. When we write music we write very catchy hooks and I think this will be very apparent on the new record.

Sleaze Roxx: Your vocals on ‘The Other Side’ sound great — there are some nice high notes on there that bring Sebastian Bach to mind. 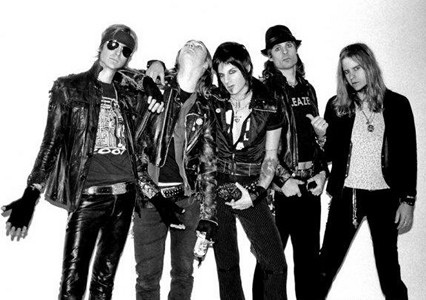 Chad Cherry: Thank you. That’s an example of me working by myself, as Johnny wasn’t there at all during the time I was doing my vocals. I’ve worked with my guitar player Adam Arling on vocals on just about everything that we’ve recorded and he’ll let me know if it didn’t sound good… or if I’m not happy with it I’ll do it again. I’m hard on myself and I’ll continue to work until I’ve got it right. Some of what we recorded came easy, other stuff I had to dig deep for, and other stuff I had to walk away from because I was pissed off at the time. The way I see it is, I don’t know how anyone is going to give a shit about it unless I give a shit about it. You know what I mean?

Sleaze Roxx: The Last Vegas are no strangers to music videos. You’ve shot and released one for “The Other Side” where things take a turn for the worse for you guys in the video. There’s a tie-in with the cover of the EP and you have a special guest in the clip…

Chad Cherry: I have a lot of friends who are in the B-movie genre. I had talked with Sybil Danning (featured in films such as Howling II, Halloween, and Werewolf Women Of The SS) about doing a video in the future. I worked with some friends who are in the business and we worked on this treatment for a new video. We wanted to do something that was little bit different — we went for something that was more cinematic.

I’m such a huge fan of horror films that Sybil was the first person I thought about when it came time to find a star for the video — I knew she could pull it off. Before I asked her we put out a want ad on a website for actresses to come to audition for the role. We received over 200 responses — this was even before I asked Sybil. We flew her out here and we let her know what we wanted to do and we had a great time. I think I can say this… we’ll be working on another project together in the near future.

Sleaze Roxx: Another video or a film?

Chad Cherry: She won’t be singing on anything because she has admitted that she can’t sing! (laughs) She can act, she can produce, and she can direct. I’m not sure she’ll be in the next music video, but we’ll be pooling our resources and making another kick ass video. I think that last one turned out really well.