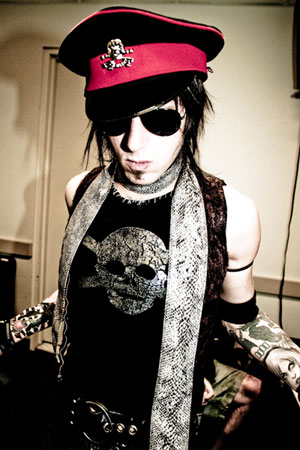 It’s a rarity these days to find a band that delivers a classic debut album, they don’t make bands like that anymore. That’s what I thought until I heard The Last Vegas’ major label debut album Whatever Gets You Off. This album is a keeper from beginning to end as it has been in rotation on the home stereo, in the car, at work and in the iPod since I picked it up in mid April. I recently had the opportunity to chat with the charismatic singer of The Last Vegas, Chad Cherry. It was a laid back interview that turned out damn good.

Sleaze Roxx: You released Whatever Gets You Off this past spring, what’s the reception been like to the album?

Chad Cherry: The album was released April 14th, everyone that I have talked to seems to really, really like it. The response has been overwhelmingly good. I think it’s great because we are the underdogs, when it comes to this kind of music. To have people react to our music in a positive way makes us think that rock ‘n’ roll is here to stay.

Sleaze Roxx: Some of the material on the album was stuff that had been released before, correct?

Chad Cherry: Right. We recorded half of the new album in Chicago. It was stuff that we had worked on through that year. It was also independently released by us, then the other half we worked with DJ Ashba, Marti Frederiksen and Mr. Nikki Sixx for the rest of the album. So half was us on our own in Chicago and the rest was recorded out in L.A., it’s like the best of both worlds really.

Sleaze Roxx: Are there songs that didn’t make the album that you have in the can for another album?

Chad Cherry: Yeah absolutely, we’re a really active, prolific band, we work constantly. When we aren’t on the road we’re writing or in the studio recording. We have a magazine clip worth of songs for about another two records. We have quite the arsenal. We’ve got a lot of songs… we don’t sit around, we write a lot.

Sleaze Roxx: I’ve been a rock fan for 24 years and one of the things that I have seen happen with up and coming bands is that they release a solid debut album but then on their sophomore album something happens. They change and then go in a different direction. I’ll use Cinderella as an example, the Night Songs album was gritty and glammy but it packed a punch. It was a great, phenomenal record and then they did Long Cold Winter, another good album but they went in a different direction. Is The Last Vegas that we hear on Whatever Gets You Off the same band that we’ll hear in the years to come?

Chad Cherry: That’s a good question. We do things a little bit more organic, we don’t try to go for a different style or anything. We’re not edging toward any particular direction. This is exactly what we do. We don’t spend too much time thinking about what we do or what we should do. That is a good question because… there are bands that put out records and their early stuff is usually their best stuff, then later on in their career they put out stuff that you don’t want to listen too much less buy. Like I said earlier, we’ve been writing songs and the next record that we put out is gonna have stuff that’s even older and we’ve never even played live. Really, really good rock songs that we know you fans will like too, and of course that we like as well. I think the direction that we move into is more or less where we are at right now. We’re simply true, blue rock ‘n’ roll and I don’t think we know any better to change it or have it any other way.

Sleaze Roxx: As a fan that’s exciting. I love the album, you guys have album of the year as far as I’m concerned. It’s a classic from start to finish.

Sleaze Roxx: When I read the list of all the people involved on Whatever Gets You Off it was overwhelming. Usually when you have this many cooks in the kitchen the result could be disastrous. Why did this work so well? 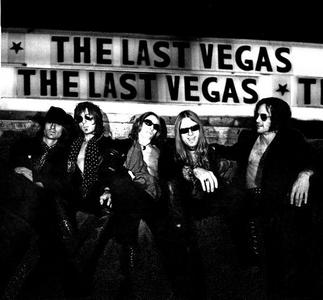 Chad Cherry: I think most people were kind of leery because we do have our own style and our own sound. A lot of bands can go into the studio and get it rearranged, I think the reason that this worked out so well is because they worked as a team and the fact that they are all veteran rock ‘n’ rollers and they knew exactly what we were about and they knew exactly what we wanted to achieve. I think what really was helpful was the fact that they didn’t try to change us or polish the sound, they kept our edgy, aggressive rock sound. They were great guys and they were just amazing to work with in the studio, I think we’ll definitely work with them later on. I think they didn’t want to take away anything from what we had already established as a band. I think it was great because these guys were all about the music; they weren’t about anything else other than putting out a quality record.

Sleaze Roxx: Do you think that Nikki Sixx is a bit envious of the amount of energy and spontaneity that Whatever Gets You Off possesses?

Chad Cherry: (Busts out laughing) I don’t think Nikki has too much to be envious about man!He’s such a great guy, everything that this guy has is something that he has worked his ass for man. I think he sees our potential and our raw power, he knows it and he loves it and then we got the opportunity to work with him and his label. I can’t say enough great things about him, he a great person, good friend and as you know an awesome songwriter. And he’s completely dark and evil! (Laughs) Which I love!

Sleaze Roxx: You guys opened for Motley Crue this past fall. Being that half of Motley isn’t partying anymore was the opening band carousing limited by them?

Chad Cherry: It’s a give and a take, you know what I mean? You can do whatever you want to do just as long as you’re not pushing the limits or hurting anyone. You get on a huge tour like that and there’s just so much liability that can go into it, people are just ready to sue anyone at the drop of a hat. So you gotta be smart about it, just don’t become a party idiot. You have to respect the show and what’s going on. We were asked to just use our best judgment and keep it in check.

Sleaze Roxx: Why wasn’t The Last Vegas involved in Cruefest II? I personally think that you guys would have been a better fit than two of the others playing on the bill. 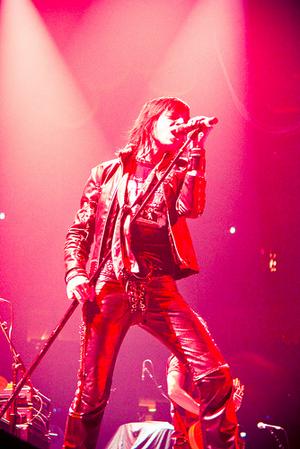 Chad Cherry: That’s a pretty relevant question, but I don’t really have an answer for it. I do know that we are going to do some pretty massive touring this summer and into the fall on our own. I’m really not too sure why we aren’t on Cruefest, but I did hear recently that there might be some side stage action happening that we may or may not be a part of, but I really can’t confirm at this time.

Sleaze Roxx: Well, I suppose we can hope for Cruefest III then?

Chad Cherry: Yeah, well we’ll see. We’ve got a lot of stuff on our plate, usually we head overseas a couple of times per year and we’re going out on our own. Then we’ll do some stuff with some bigger bands and that will take us through summer, we’ll be active, just keep an eye out for us.

Sleaze Roxx: How was the experience from going from the clubs to playing arenas? Which do you prefer?

Chad Cherry: You know what, as long as I’m on stage that’s all that matters to me. As long as I get a chance to play in front of people I’ll give it my all. We as a band are the type of people who will give the same show to 2,000 people or 20 people, you’ll get the same balls to the wall rock ‘n’ roll. I love playing arenas of course, who doesn’t, but I also love the intimacy of the clubs, the area you get more energy to feed off of the people. Wherever it is its all good for me man, but Madison Square Garden is definitely a great place to play.

Sleaze Roxx: With music videos not being the desired way to promote an album these days, did you have to convince the label to issue a music video? What do you think of the end result of music video for “Loose Lips?” 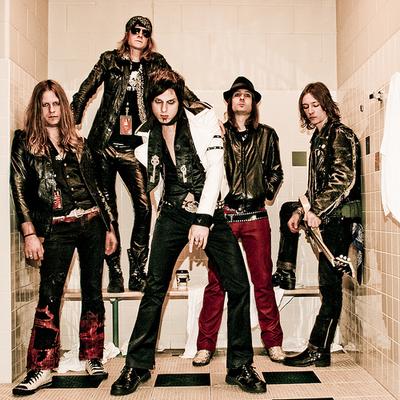 Chad Cherry: Our label has been amazing, they gave us creative freedom with the videos and when we need help they are there to help back us up. I think in this day and age you need to have the imagery going on, you always did, but I think it’s become easier for people to get online and go to youtube and check out videos there. We are actively making videos for this entire record. The first video, “I’m Bad”, was filmed in Chicago and one of our favorite hangouts. The second video we took a couple of tries at it. I think it turned out decent, our guitar player Adam Arling and I edited it, it’s there and I like it. It has an 80’s cheap Stones feel to it, I think it was good for the song. We have a whole lot on our plate, videos, tour, and the label is behind us all the way.

Sleaze Roxx: Well Chad thanks for taking the time to answer some questions. I love the album. It’s a throwback to…

Sleaze Roxx: I don’t think so.

Chad Cherry: Well you know, we get from people, “hey you guys are cock rock.” I think to myself, well we do have hair and we do have cocks… If anything I always thought that we were more of a 70’s swagger band than anything else.

Chad Cherry: I think people don’t know what to label us as because the last time there was music like this it was back in the 80’s. People just feel the need to put a label on everything don’t you think? I agree with you, we’re just rock ‘n’ roll music.

Sleaze Roxx: I think Buckcherry ran into that too when they first came out.

Sleaze Roxx: With that I’ll let you go man, thanks again.

Chad Cherry: Thank you for the interview and your support come out and see us when we come to your area man, we’d love to see you.

Thanks to Chad Cherry and Ruben Mosqueda