WHAT WAS OLD IS NOW NEW AGAIN. IN THE LAST FEW YEARS, THERE ARE MORE AND MORE BANDS OR BAND MEMBERS REFORMING TO PERFORM THEIR ORIGINAL MUSIC AS THE CLIMATE FOR HARD ROCK / HEAVY METAL SEEMS TO BE GAINING MOMENTUM AND A GENERALLY WIDER ACCEPTANCE. AFTER PUTTING THEIR BAND ON THE SHELF FOR NEARLY A DECADE, THREE FRIENDS GOT BACK TOGETHER TO WRITE, RELEASE AND PERFORM ORIGINAL MUSIC. THIS NUCLEUS ALONG WITH GUITARIST JEFF YOUNG IS THE GENESIS FOR LAST CALL MESSIAHS WHO WITH THEIR STELLAR SELF-TITLED EP ARE LITERALLY BRINGING SLEAZE ROCK TO THE FOREFRONT THE WAY IT SHOULD BE. SLEAZE ROXX CAUGHT UP WITH LAST CALL MESSIAHS’ FRONTMAN CHRIS CLARK COVERING EVERYTHING FROM THE BAND’S BEGINNING TO WHAT YOU LIKELY DIDN’T KNOW ABOUT CLARK. 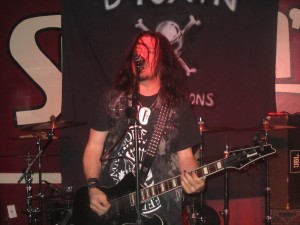 Chris Clark: We’ve known each other Steve, Chuck and I for about gosh, 12 years now. We formed a band in 2003 called American Zeros and it was an attempt at like original sleaze and glam but we just weren’t having a whole lot of luck with it. It seemed like at the time the climate was not right. You know, extreme metal had just started and it was gaining a lot of momentum so we weren’t making a whole lot of ground. But last summer — probably in June — I contacted Steve because I knew he was playing in a Motley Crue tribute band and I had a couple of original songs I wanted to work on. So I called him to see if he would be interested in forming an original band and he was. We decided we just wanted something really sleazy and original and just kind of in the vein of all our heroes, you know, Spread Eagle and Bang Tango. We contacted Chuck to see if he was available to play drums and he was. He’d just been back in the area from Fayetteville and he was back in Raleigh and the timing just worked out perfectly.

Sleaze Roxx: How did you hook up with Jeff?

Chris Clark: We originally started rehearsing as a three piece — Steve, Chuck and myself — and we realized pretty quickly that we needed a hot lead guitar player. We needed somebody who can riff and lead like Ace Frehley or Angus Young. And as soon as we hit on Angus Young, Steve goes “Hey. There’s an AC/DC tribute band with this guy Jeff that plays Angus and he’s really good!” so we tried to contact him about playing lead guitar with us and he was interested. Then within one practice it was — you know, we knew we had it — he could fit perfectly.

Sleaze Roxx: Awesome. And how would you describe the band’s sound?

Chris Clark: We are sort of a — we’ve very much influenced all of us by the ‘80’s bands such as Faster Pussycat, Bang Tango, Spread Eagle and Kix. We also a lot of the time listen to some of the newer stuff coming out of Sweden like Hardcore Superstar and Crashdiet and we kind of bounce stuff off each other. My favorite band of all time is Hanoi Rocks. I like them and old Aerosmith so all those influenced and now just kind of come together into sort of what we have as Last Call Messiahs.

Sleaze Roxx: It seems like your band has come a long way in a very sort amount of time. You already released an EP in December 2014. Do you think that your experience from prior groups helped in that regard?

Chris Clark: I definitely think so and I think with particular, Steve has been in a Motley Crue tribute band and they’re really popular in the area. Chuck was in a band called The Fifth, which are a very popular band in Fayetteville and Jeff being in Thunderstruck, the AC DC tribute, all those bands have a lot of public visibility in our area. When we got together as Last Call Messiahs and started playing, initially it got people really interested in particular to prove who we are and other bands that we’ve been in.

Sleaze Roxx: Do Steve and Jeff still continue in their tribute bands?

Chris Clark: They do. They sure do. 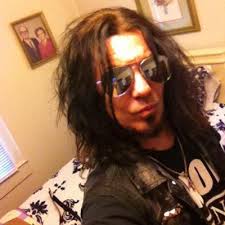 Sleaze Roxx: You mentioned that the climate is different this time around. What makes you say that?

Chris Clark: It seems to be that there’s more, there’s more interest in just straight ahead original rock. I know our friends in 21st Century Goliath — in Charlotte not too far away — have really in the past two years had a lot of success and they actually are popular in Raleigh. They always stop there and play. People are just ready for that, for something original, something fresh. When we play out live, we’re amazed how many people show up. It just seems to be the right time to play.

Sleaze Roxx: Last Call Messiahs signed on with Demon Doll Records a couple of months ago. How do you anticipate that this will help the band in the future?

Chris Clark: We’re hoping that the work we do with Demon Doll is going to help us reach more of a global audience. We would love more than anything to be able to play in Europe and Japan, Sweden. Demon Doll has a really good reach into those areas and get to sort of spread the word further outside of Raleigh and the East Coast of US.

Sleaze Roxx: Now, Last Call Messiahs to me seems to be one of the best organized band that I’ve seen in a long time and you seem to have a lot of people behind you helping you out. Would you agree and if so, who are these people?

Chris Clark: We really do. We’re very fortunate. It is almost like this band is you know, four guys on stage but behind us are girlfriends who are really savvy in marketing. We’ve got graphic designers, web developers, people that have done professional bookings and who are proven to sell merch and design things. It’s almost like an ad agency is right behind us (laughs). We got extremely lucky that some of the people and our friends in Raleigh are very big M3 festival supporters. They really love music from that time period and always come see us play. Social media — they’ve really backing us on social media and kind of hyping us up so it’s sort of like the perfect environment for us.

Sleaze Roxx: Last Call Messiahs played the M Pre Party in Columbia, Maryland back on April 30, 2015. How was that experience?

Chris Clark: It was just beyond our wildest dreams. It really was! We were so excited to get the call back in — it was in February that I think we were confirmed. It was so much fun. We had a blast and to be in the company of Nasty Habit, Station, Lady Beast and Mach 22, it was phenomenal. We were just honored to be there.

Sleaze Roxx: I saw that you guys are big music fans too because you attended the M3 Rock Festival the next couple of days after. Who were your favorite and most surprising performances by?

Chris Clark: My personal favorite was Bang Tango because I’ve always been a lifelong fan and I’ve never seen them live. I actually got to meet Rowan Robertson, the guitar player and talk to him and get a guitar pick so I was in super fan boy mode just to meet him — very excited (laughs). The most surprising performance to me was with Queensryche. I’ve been kind of a casual Queensryche fan but I’ve never seen them live and Todd LaTorre’s vocals just absolutely blew me away.

Sleaze Roxx: Yes. LaTorre’s vocals were very impressive, Now, in terms of Last Call Messiahs’ material, given that you, Chuck and Steve were together more than 10 years ago, was some of the material from Last Call Messiahs written during that period?

Chris Clark: No, honestly it wasn’t. Once we initially got together, I had maybe one or two songs. I had the foundation of “City Of Trash” and the main riff from “Sinner’s Swing” sort of formulated but when the three of us got together in a room, it really became its own thing. We even thought about — we went back and found some of our really really old recordings from American Zero and compared those to the two just bone skeletal songs that we had and then decided immediately. It’s like “Nah. We’re working on fresh stuff.” This is totally where we want to go with this vibe that we’ve got.

Sleaze Roxx: You played a lot of new material at the M Pre Party. When can we expect a new recording from Last Call Messiahs?

Chris Clark: We are hoping to get into the studio closer to the end of the year — possibly November-December — and maybe do six tracks this time for another EP with a release in early 2016. We’ve got a lot of material that we’re anxious to get out there and we’re going to use this summer to sort of tighten down the songs and get them ready to unleash.

Sleaze Roxx: I know you have a couple of big shows planned for the future. Can you tell us about those?

Chris Clark: We have a show July 31st at a place called Deep South in Raleigh and Station are going to be coming down to play with us. Then December 5th in Raleigh at the Lincoln Theater, we’re going to be playing with Kix, 21st Century Goliath, The Fifth and a band called Automag who are very popular here — we’re extremely excited about that.

Sleaze Roxx: Now, tell us something that people would not know about Last Call Messiahs or yourself.

Chris Clark: Let’s see, gosh, I’m actually a pretty mild mannered guy. I live way out in the country and I live with my 88-year-old grandmother. Most of the songs are written in an unairconditioned — like a little garden – shed (laughs). So it’s kind of funny that people see us and we put on this image of like yeah, we are this rough and ready sleazy downtown band (laughs). I’m like this mild manner graphic designer who lives way out in the country (laughs).

Sleaze Roxx: (Laughs) that’s pretty funny! Last question for you — what are your top three favorite all time records and why?

Chris Clark: Top three — let’s see. I would say Hanoi Rocks’ ‘Two Steps From The Move’ just because that blew me away when I was 12 years old and I saw “Up Around the Bend” on MTV. I thought their image and their sound was just so — it really pulled me in and I loved how they combine like the New York Dolls and Aerosmith. I easily fell in love with them. Number two would probably be Faster Pussycat’s first album because I was really into Guns N Roses and then when I saw “Bathroom Wall” on MTV, it seemed like they were a little more glam and a little more accessible. I couldn’t play guitar that well nor sing that great so Steve was like “Wow. I can do that. I can drift like that, write songs like that and I want a band like that.” Let’s see — number three would probably be gosh, I’ll have to go back and say Aerosmith’s ‘Rocks’ because they, in my mind, they really set the template for just good sleazy hard rock. Joe Perry could write the greatest riffs and Steven Tyler was — the toxic twins. They came up with just the perfect just sleazy classic songs – I actually bought ‘Rocks’ the other day through e-bay and I’ve got a record player so I’ve just started rebuilding my vinyl collection and that was the first record I wanted to get. I think I found it for like $18.00. I was excited to find that (laughs).