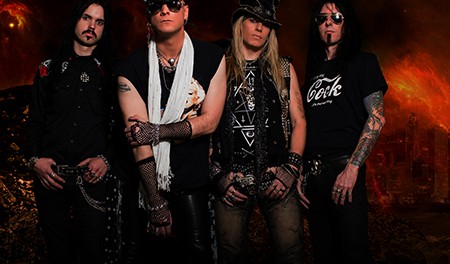 THERE ARE FEW BANDS THAT LEAVE SUCH A LASTING FIRST IMPRESSION ON THEIR LISTENERS AS THE SUICIDE BOMBERS HAVE DONE FOR ME SINCE RELEASING THEIR FIRST CD ‘CRIMINAL RECORD’ IN 2012 AND THE NEW ‘THE SEX TAPES’ EP EARLIER THIS YEAR. THE SUICIDE BOMBERS NOT ONLY PLAY THEIR MUSIC, THEY LIVE IT AND LEAVE THEIR FANS WANTING MORE AFTER EACH LISTEN BECAUSE THEY ARE THAT DAMN GOOD! MUSIC HAS BEEN MY LIFE FOR OVER 40 YEARS AND I AM ALWAYS ON THE LOOKOUT FOR AMAZING NEW BANDS. I FIRST HAD A CHANCE TO SPEAK TO CHRIS DAMIEN DOLL BACK IN 2012 ABOUT HOW GREAT THE BAND’S ‘CRIMINAL RECORD’ CD WAS. AFTER THE SUICIDE BOMBERS RELEASED THEIR NEW SIX SONG EP ‘THE SEX TAPES’ IN MARCH 2015, I WAS SO BLOWN AWAY THAT I CONTACTED CHRIS AGAIN AND DECIDED TO DO MY FIRST INTERVIEW FOR ALL THE SLEAZE ROXX READERS TO CHECK OUT! SO SIT BACK, CRACK OPEN A COLD ONE AND ENJOY!

Sleaze Roxx: So Chris, what has the band has been up to since ‘Criminal Record’ came out back in 2012?

Chris Damien Doll: We’ve been gigging a lot in Scandinavia, wore out a booking agent and a bass player, wrote and rehearsed new songs and… well, just been us really. 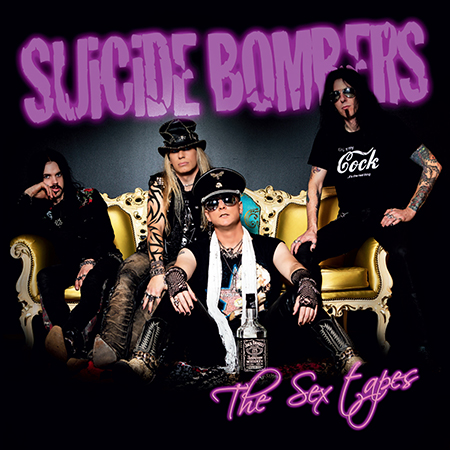 Sleaze Roxx: I see there was one change in the line-up with your bass player James Nero leaving. What happened and how did you find your new bass player C. Slim?

Chris Damien Doll: James Nero aka The Bitch Commander has his own band Kill City Bandits. It worked pretty well when both bands were just starting out, but as things started happening for both bands at the same time, he had to make a choice so he could fulfill his obligations. I think that worked out for the best as the world now has two great bands rather than just one. I have known C Slim aka The Thunder Mechanic since I can’t remember when. He used to be in a cool band called Viper Cult, who supported my old band a lot. I produced their album which turned out great and in return Suicide Bombers recorded our first demo in C’s studio. He was also our driver for a few gigs, so C has very much been in the “family” for a long time. When word got out that James quit, C and I started talking… I think his rock ‘n’ roll finger was itching again. We did one rehearsal and it sounded great. He’s a fantastic bass player with an insane groove and he can hit all the backing vocals. We haven’t looked back once!

Sleaze Roxx: Your new CD ‘The Sex Tapes’ was just released in March. It has only six songs and sound bites in between each song to give it a nice flow from start to finish. How did you come up with such a great idea?

Chris Damien Doll: We always wanted to do that! A lot of bands have intros and outros on their albums, sometimes even a few intros, but no band that I am aware of has made a whole record the “soundtrack to the best movie never made” and tied it all together like this. A mini-album is the perfect format to showcase such an idea. Glad you like it! We’ve gotten surprisingly little shit for it, so it seems most people like it. 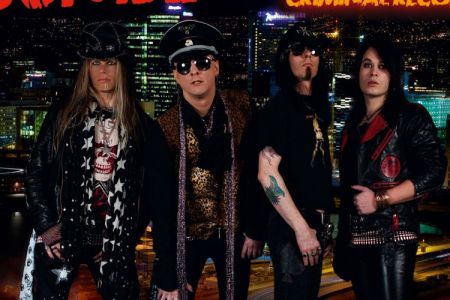 Sleaze Roxx: Is this a little taste of what’s to come and are you also working on a new full length album?

Chris Damien Doll: It’s a little early to say. We are working on songs for the next full length album and I can already promise that it’ll be a killer! But that’s also about as far as we have come with it. We like to tweak the songs as much as possible, to make sure that they reach their full potential. The title, graphics and whatever else usually comes a little later in the process, but we’ll be sure to let you know once it’s done. At the moment, we are still too busy promoting and touring ‘The Sex Tapes’.

Sleaze Roxx: Your guitar gun slinger Lazy Leather is one of the hottest players out there. With you playing second guitar, it really gives the band a full sound and with the addition of C. Slim on bass and rock solid drummer T-Bone anchoring the rhythm section, you guys are definitely one of the best bands out there. The one thing that stands out more than anything is that you don’t just go out and play your music, you live it.

Chris Damien Doll: Thanks! We’re pushing the envelope as far as we can on everything and we’re surely having fun doing it, but there’s also an honesty to this band. We stand by the stuff we do and we mean it. Irony, parody and copy bands can be fun to watch for a gig or two, but that’s not what we’re about at all. We’re about blending all our influences together. That way, what comes out is genuinely ours.

Sleaze Roxx: Have you been playing any live shows lately in Norway and the rest of Scandanavia?

Chris Damien Doll: Yeah. We have pretty much been playing since the release of ‘The Sex Tapes’ in late February. The release party was the biggest production we’ve done this far. Marshall walls with Suicide Bombers logos on them, custom made mic stands, brand new backdrop and pre-recorded audio commercials for all our merchandise in between the songs. It was a great concert! We filmed it with seven cameras and recorded the sound, so when we get a bit of time, we’ll do something with that. We’ve been around Norway a lot since the release, but we’ve also played Sweden, Germany and the Czech Republic. So we’ve been keeping ourselves busy.

Sleaze Roxx: You must have some amazing road stories. Can you tell me one or two that is printable?

Chris Damien Doll: We’ll save those for the biographies later! 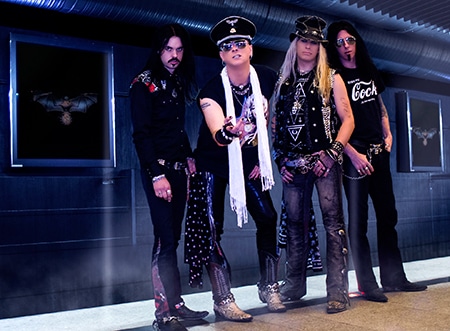 Sleaze Roxx: How did you get involved with the tribute CD for the Backstreet Girls? The song you picked “Devolicious Boys” sounds like a perfect Suicide Bombers song and it is so good that you want to go out to a strip club and have a couple cold ones and party the whole night with as many sleazy women as possible (laughs)! Without a doubt, it is one of the best songs on ‘The Sex Tapes’.

Chris Damien Doll: The Backstreet Girls are rock ‘n’ roll royalty in Norway and they are also our good friends. They have been going since the mid 80s and are still releasing good quality records today. We were approached by Stigolo — his real name is Stig but “he’s just a Stigolo” — who was putting together a new tribute album to them last year, and asked if we wanted to contribute a song. Of course we wanted to! It was a real honor! Then we all proceeded to go through the Backstreet Girls catalogue to find a song. These guys have so many great songs, but we wanted one that hadn’t already been covered to death and also one that wasn’t just a great song, but could also be a great Suicide Bombers song. We narrowed it down to a shortlist and “Devolicious Boys” won. That’s from their latest record ‘Death Before Compromise’ which was released last year. You should go check out the original too! 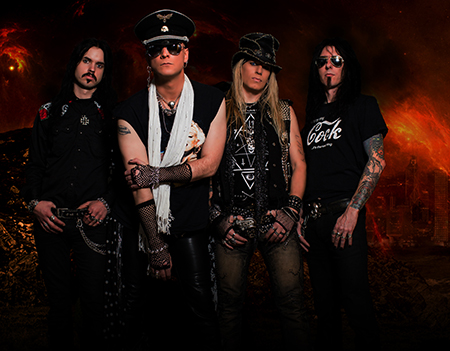 Sleaze Roxx: It looks like you had a lot of fun doing the video to “Devolicious Boys” live in a local club one night. Can you tell me more about it? It must be a blast hanging out with you and the rest of the band. What is a typical night with the Suicide Bombers like?

Chris Damien Doll: The video was Lazy’s idea. The rest of us hadn’t thought that far. We had filmed a show in a club and some other stuff and one night, Lazy just mailed us the rough cut of the video out of the blue. Already there in its infancy, it looked so great and was such a brilliant idea, so we decided to go with it. We filmed some extra stuff and Lazy edited it in. All of a sudden, we had a very cool video. At the moment, a typical night with the Suicide Bombers would be one of our shows. Which means get in the van, listen to great rock ‘n’ roll, have a few drinks, fuel the megalomania, get to the club, set up, have soundcheck, eat if we’re hungry, play a show, party as much as possible and try to find the hotel key.

Sleaze Roxx: Do you have any plans to play in the US or England or anywhere else in the world? What is the rest of your schedule for 2015?

Chris Damien Doll: Our booking agent is working on a lot of stuff, but as far as I know there are no plans for the US or UK as of yet. We still have a few more shows to do and then we’ll resume touring in the autumn. We’ll be working on the mixing of the release party and also start more heavily on the songs for the next album. As usual, we’re keeping ourselves busy as fuck.

Sleaze Roxx: Is there anything else you would like to add for all the Suicide Bombers fans out there?

Chris Damien Doll: We wanna thank everyone who’s supporting us in one way or another. All the people who buy the records, merchandise, come to the shows, write about us, spread the word and all of that. You guys are great and we hope to play to all of you sooner or later. To the people who have yet to check us out, I strongly encourage you to visit our youtubechannel at www.youtube.com/suicidebombersmusic, our website at www.thesuicidebombers.com and our Facebook site at www.facebook.com/suicidebombersmusic. You’ll find videos, music and all the latest news on those sites. C U out there! …over & motherfucking out!