COLLATERAL ARE FROM THE UK AND A BAND ON THE RISE HAVING JUST LANDED ONE OF THE SLOTS ON THE ‘RUNWAY TO PARADISE WITH JON BON JOVI’ SPAIN CRUISE FROM AUGUST 26 TO 30, 2019 AS WELL AS THE HEADLINER SLOT FOR THE BREAKING BANDS FESTIVAL IN 2020. COLLATERAL CONSIST OF FRONTMAN ANGELO TRISTAN, DRUMMER BEN ATKINSON, BASSIST JACK BENTLEY SMITH AND GUITARIST TODD WINGER. THE BAND RELEASED ITS DEBUT EP ‘4 SHOTS’ BACK IN 2018 AND ARE SCHEDULED TO RELEASE THEIR DEBUT FULL-LENGTH ALBUM VIA ROULETTE MEDIA IN OCTOBER 2019. 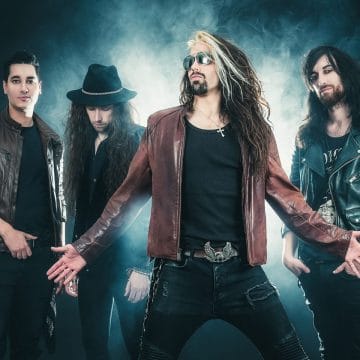 Sleaze Roxx: The group started out as kind of a solo band since it was called the Angelo Tristan Band. What prompted the move to go from solo band to more of a group, at least from an outsider’s perspective?

Angelo Tristan: In a way, it wasn’t a really solo band. The only reason it was called the Angelo Tristan band was because in the past, In previous bands that I was in, other members would try and take control of the direction. I’ve always been very focused and knew exactly where I wanted to go so as long as all the other members had the same vision, then they would have just as much say in what happens within the band. As soon as I knew that the members were the right ones… That’s when we all felt that the name needed to change.

Sleaze Roxx: How did you guys come up with the group name Collateral?

Angelo Tristan: We were just sitting around naming some of our favourite films…. I saw a trailer for a new Tom Cruise film and thought of the film where he plays a hitman… It was pretty simple. We just had to pick the least worst name [laughs].

Sleaze Roxx: [Laughs] Collateral’s “Story” on your Facebook page indicates in part “Ripped jeans, cowboy boots, long hair and make-up, Collateral are a band that look and sound like a stadium rock band.” However, one band member is clearly breaching part of the description [laughs]. Will this always be the case and has there been any discussions to get drummer Ben Atkinson to grow his hair a lot longer [laughs]?

Todd Winger: Ahhhh Ben… He used to have crazy long hair when he was in a metal band, before we knew each other. I remember Paul Geary from Extreme had short hair, and I thought he looked cool for standing out and breaking the trend. Time will tell.

Sleaze Roxx: Both Collateral and German rockers Kissin’ Dynamite advertise themselves as “stadium rock.” What does that term mean to you?

Angelo Tristan: It’s the biggest party in the world and we’re the DJ. It’s about getting 50,000 of your closest friends in your living room and giving them an experience that they will take to their graves. Come and be part of it. 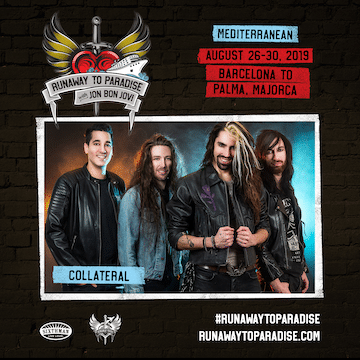 Sleaze Roxx: Helix frontman Brian Vollmer once stated that it was hard for bands to learn their craft because they did not get out there and play tons of gigs. You guys seem to be an exception in terms of newer bands since you have more than 100 gigs under your belt in the last four years. How important do you think that all these prior shows have been leading up to the release of your EP ‘4 Shots’?

Jack Bentley Smith: The best thing for experience is always playing live. It gives you the confidence in your songs as well as giving you an opportunity to refine them, seeing which bits are strong / weak for example.

Sleaze Roxx: Speaking of the EP ‘4 Shots’, how did you come up with the name for the EP?

Angelo Tristan: It was our first major release as a band. All of us now have the same vision and will do anything to do it so it’s basically each one of us having a shot. Also, when people offer us drinks at shows, we aways say “4 Shots!”… We like a little drink when the time is right [laughs].

Sleaze Roxx: Why did you decide to release an EP rather than a full-length album. I imagine that you must have more than enough material for a full-length record since the band has been around in some form or another for about five years.

Jack Bentley Smith: The idea of the EP was to get our name out there, we had recently changed our name as well as a couple of members. We could have gone for an album but we thought it was more important to get everybody involved in the writing process rather than churn out a couple of “oldies”. We are constantly improving as writers and I’m really looking forward to the album, I think it’s going to be a winner!

Sleaze Roxx: I understand that you’ll be releasing a full-length album in September. Will it include only new material or some or all of the songs from the EP as well, and how will the [rest of the] songs on the full-length record differ from the ones on the EP?

Todd Winger: Recording a full album is giving us the chance to show a few different sides to ourselves. No two songs are the same! We are going to re-release “Midnight Queen” on the album and all the rest will be new. Overall, it’s got a bit more grit and dirt than the EP, which suits the fans it seems.

Sleaze Roxx: More grit definitely suits me [laughs]! What are your thoughts on the UK rock scene and the rock n’ roll industry overall these days?

Ben Atkinson: The great news is there is a massive resurgence going on in the rock music industry so the scene is growing. We’re ecstatic to be a part of it and we’ve had nothing but support!

Sleaze Roxx: Can you please share something for each Collateral band member that people would not know? 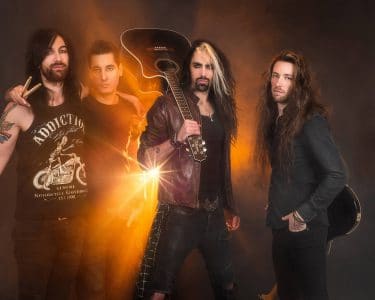 Angelo Tristan: My tooth exploded on stage due to a power surge through the mic. Todd doesn’t wear any underwear on stage! Ben used to be a mortgage advisor before wanting to be a rock star and Jack secretly likes disco.

Sleaze Roxx: Last question! For each of you, what are your top three favourite albums of all-time and why?

Todd Winger: Def Leppard’s ‘Hysteria‘ — The production is outstanding, vocals are ridiculous and the song writing is amazing. Joe Satriani’s ‘The Extremist- — Nothing I don’t like about this album, from the cover art to the last bluesy noodle that he sneaks in.. The composition is flawless and powerful. BlackBerry Smoke’s ‘The Whippoorwill’ — I’m a huge Blackberry Smoke fan and that is largely down to this album. Songwriting is epic, love the lyrics. No showboating, just pure music from the heart!

Ben Atkinson: Symphony Xs’ ‘The Odyssey’ — I love everything about this album. It’s the first prog metal album I heard and it still stands up today. Megadeth’s ‘Rust In Peace’ — Another album that I always go back and listen to. The songs are still iconic! Linkin Park’s ‘Hybrid Theory’ — The first metal album I heard as an angry teenager. Still listen to it now and get my angst on.

Jack Bentley Smith: Guns N’ Roses’ ‘Appetite For Destruction‘ — It got me into ’80s rock. ‘Led Zeppelin 3’ — It’s the first album I ever bought plus “Immigrant Song” is a banger! Europe’s ‘Prisoners In Paradise‘ — It just reminds me of good times and summer.

Angelo Tristan: Bon Jovi’s ‘Slippery When Wet‘ — You just need to listen to it to understand why [laughs]… The songwriting is indescribable. It’s powerful. It was an album they had to get right and they did. Those songs got me through me childhood and still get me through my adulthood. Bon Jovi’s ‘This Left Feels Right’ — I have to pick this only because it was the first album I ever bought. When I heard “Livin’ On A Prayer” for the first time, they had just released this album so I went out with my dad to the store and saw that it had “Livin’ On A Prayer” on it. Obviously, it was the wrong version though it made me listen to it differently and made me understand music a little more. Richie Sambora’s ‘Stranger In This Town’ — Richie is the biggest influence on my music and this album was probably my all-time favourite growing up. His voice, guitar playing and songwriting is second to none and in my view, the most underrated in the industry.

The Angelo Tristan Band‘s “Calm Before The Storm” video:

Thank you to Peter Noble of Noble PR Consultancy for facilitating the interview.