SLEAZE ROXX CAUGHT UP WITH LIVING COLOUR FRONTMAN COREY GLOVER, WHO WAS PROMOTING HIS APPEARANCE AT PORTLAND, OREGON’S ‘HEADBANGER’S CON’ WHICH WILL BE TAKING PLACE ON NOVEMBER 10TH AND 11TH, GLOVER TALKED TO US ABOUT HOW ROLLING STONES FRONTMAN MICK JAGGER’S INTEREST IN LIVING COLOUR BACK IN THE DAY AS WELL AS FILLING US IN ONTHE PROJECT ULTRAPHONIX, WHICH FEATURES GUITARIST GEORGE LYNCH [DOKKEN, LYNCH MOB, KXM]. 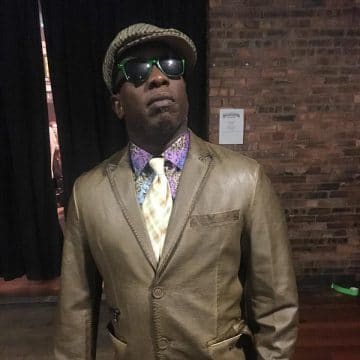 Sleaze Roxx: You’re going to be part of the ‘Headbanger’s Con’ in Portland, Oregon on November 10th and 11th.

Corey Glover: That’s right. Chris Rohaley [event owner] asked me to be a part of this inaugural event. I actually met Chris at another con and he approached me about it and I said “I’m in!” I’m excited about meeting up with the fans and making this a success so we can do this again and again.

Sleaze Roxx: This August, you released an album with the band Ultraphonix. How did you get involved with that?

Corey Glover: Yeah, the album is titled ‘Original Human Music’ and it was one of the best experiences I’ve ever had making a record. I got involved with that band when our bass player Pancho Tomaselli contacted me about coming down to check it out. He also happens to be friends with George Lynch. I heard what they were doing and I wanted in right then and there.

Sleaze Roxx: What was the length of time that you worked on the album from beginning to end?

Corey Glover: We worked really quick as far as writing. I’d almost say immediate. I’d say that it took about three to four months as far as recording the album, mainly because the guys in the band live on the west coast and I live on the east coast. The only reason that it took that long was because I’d have to take time during down time to fly out to record. They’d record. We’d work on 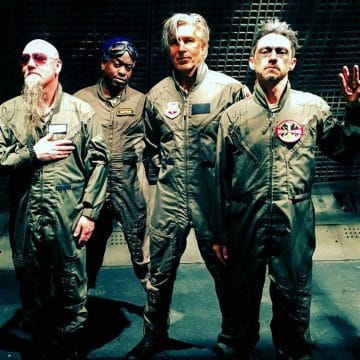 lyrics. I’d fly over tighten up the lyrics and lay down vocals.

Sleaze Roxx: So this wasn’t like the typical ‘supergroup’ file sharing, recording session.

Corey Glover: Oh, no! We didn’t want that. We could have done that but we wanted the band experience and did this all in George’s garage. It’s one of the most fun experiences I’ve had working on a record.

Sleaze Roxx: How would you describe the Ultraphonix sound? It’s groove oriented, it’s progressive at times and soulful.

Corey Glover: [Long pause] It’s all of that, but I refuse to to describe it. I feel that if I gave it a word, it would take away from the music. I really feel that way. I know you’ve probably heard that before, but I really feel that way. I’m not being pretentious. I will say that this is not what you’d typically hear from George Lynch. This is unlike anything that he has done before and I’m proud to be a part of it. I will say that in order to understand what Ultraphonix is, you’ll have to listen to the record.

Sleaze Roxx: Is Ultraphonix a band you foresee going forward or is this a ‘one-off’ type of band? 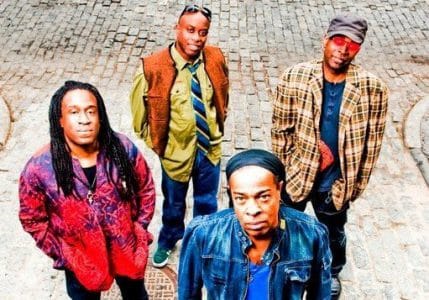 Corey Glover: Oh, no we’d love to do something more. I think it’s just really unfortunate that we haven’t had the opportunity to play this live. The only reason that we haven’t is because our schedules haven’t coincided, but we hope to play live. I want that more than anything else, I know the rest of the guys in the band feel the same.

Sleaze Roxx: We all remember the glory days of MTV and I recall seeing the music video for “Cult of Personality.” It was unlike anything out there at the time. That was the video that launched the band, but was that the label’s choice or did you guys have to fight to get that music video and single?

Corey Glover: That was our doing. That wasn’t what the label wanted, but we felt that “Cult of Personality” was what the album was about and what we represented. Don’t get me wrong, I love all the songs on ‘Vivid’ and they all have a special place in our hearts, but that one just took off. MTV was playing the music video, radio started playing it and the thing just took off.

Living Colour‘s “The Cult Of Personality” (from Vivid album):

Sleaze Roxx: You guys supported the Rolling Stones during the touring cycle for ‘Vivid’ didn’t you? That must have been ‘The Steel Wheels Tour.’

Corey Glover: Exactly, it was a great opportunity and a wonderful experience.

Living Colour onstage with the Rolling Stones in Montreal, when opening the Steel Wheels Tour in 1989

Sleaze Roxx: Mick Jagger took you guys under his wing. How did you meet?

Corey Glover: When Mick Jagger was working on his solo album [“Primitive Cool”], he had [Living Colour guitarist] Vernon [Reid] do some guitar tracks. Mick had been looking for guitarists to work on the album and possibly do the solo tour. There was a lot of buzz about Vernon and about the band as well. Vernon went to the rehearsal studio and I tagged along. Mick came out to talk to us. It was so surreal to have him come to us, rather than us to him. He had heard about the band and he mentioned that he’d love to come see us sometime. It just so happened that we were playing at CBGB’s that weekend. We invited him to be our guest. We didn’t expect him to come, but he did and he loved the band. One of the guys that helped was [Living Colour bassist] Doug Wimbish who was in Mick’s solo band and would later join Living Colour. Doug really talked us up, which led Mick to ask 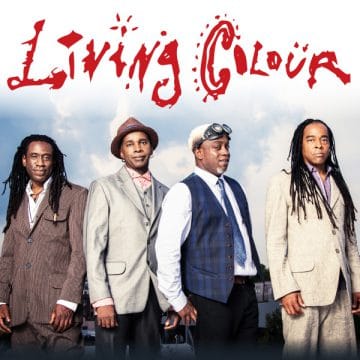 us if he could help. He was mixing the album in New York and he invited us to go into the studio and record some demos to send to record companies. That’s also how we met [producer] Ed Stasium who was the head engineer on Jagger’s record. We did three-four songs and the rest as they say is history.

Sleaze Roxx: What were the songs you cut for that demo?

Corey Glover: They were “Which Way To America,” Glamour Boys” and one other which escapes my at the moment but that was the demo.

Sleaze Roxx: You recorded “Memories Can’t Wait” by The Talking Heads on the album, but in the expanded reissue, there’s a cover of The Clash’s “Should I Stay Or Should I Go.” Did that surface during the sessions for ‘Vivid’ and why didn’t that make the album?

Corey Glover: That one didn’t come until after the album was recorded, but I do love that one too.

Sleaze Roxx: You worked with Ed [Stasium] again on ‘Time’s Up.’ “Love Rears Its Ugly Head” is one of my favorite Living Colour songs. You got any favorites on that album?

Corey Glover: I don’t pick favorites. It’s hard for me to pick a favorite song as an artist. I just don’t do that. We have such a large catalog at this point, you know?

Sleaze Roxx: You must really dread coming up with setlist then?

Corey Glover: [Laughs] I do at times, but we have to play what the fans want to hear, but we also have to throw in some stuff in the set to please ourselves. We’re artists.