FIVE DAYS AFTER CRAZY LIXX ANNOUNCED THE DEPARTURE OF THE BAND’S TWO GUITARISTS, EDD LIAM AND ANDY ZÄTA, LEAD SINGER AND BAND FOUNDER DANNY REXON DISCUSSES THE DUO’S DEPARTURE AND MORE IMPORTANTLY THE FUTURE OF THE BAND AT THIS CRITICAL JUNCTURE WITH SLEAZE ROXX IN THIS EXCLUSIVE INTERVIEW.  REXON ALSO SPEAKS CANDIDLY ABOUT THE STATE OF THE SLEAZE ROCK GENRE AND CRAZY LIXX’S LEGACY IF THE BAND DECIDES TO DISBAND.

Sleaze Roxx: Crazy Lixx’s parting of ways with both guitarists Edd Liam and Andy Zäta was unexpected and particularly so in Andy’s case. When did you know or realize that Andy might be looking elsewhere and when did he tell you that he was joining Inglorious?

Danny Rexon: We suspected that he was moving away from the band somewhere around February / March of this year. He had started going to the UK to meet up with the guys from Inglorious and their management and soon the trips became more and more frequent. Even though he’s had other music projects in the past, we felt this was something else and since we’ve had a similar situation before (when Vic Zino at first doubled up as the guitar player in both Crazy Lixx and Hardcore Superstar), I think we all kind of felt where it was going. In June, he finally told us he would leave the band after the summer festivals. By that time Edd had already quit and moved home (hundreds of kilometers from us) so we used Jens Lundgren as a replacement and set out to do what we knew would be the last shows with Andy.

Sleaze Roxx: Going from an established act such as Crazy Lixx to a new band such as Inglorious suggests that there might have been some problems brewing in Crazy Lixx for Andy to depart. Did Andy share the reasons why he was making the switch and if so, what were they? If he didn’t, why do you think that he would leave to play with a new band rather than stick around with Crazy Lixx?

Danny Rexon: I think all bands have personal problems between members from time to time and Crazy Lixx is no exception but I can honestly say that this was not at all the reason why Andy left, at least not from what he’s told us. If you want to know his personal reasons, you’d really have to ask him but from our standpoint, the way we understand it, he did it as a career move, concluding that he’d have more of a chance of making a career in Inglorious compared to Crazy Lixx.

Sleaze Roxx: Edd Liam’s departure is much less surprising since the band had announced back in mid-June that Jens Lundgren of Bai Bang was going to replace him for the summer festivals. Are you able to expand in any way on the “personal reasons” that were cited for Edd first being replaced and eventually departing from the band?

Danny Rexon: I don’t want to go into detail about all of Edd’s reasons — again you’d have to ask him — but the truth is that he wasn’t really comfortable with life around Crazy Lixx. He moved far away from home to live in Malmö in order to join us and he never really got settled in the town. He was often unhappy and restless in the quieter periods between studio time and touring and as the rest of the band had rich private lives away from the band. I don’t believe that was the case for Edd and I think this made him feel quite lonely. Looking back now, Edd was already distancing himself from the band basically after we finished recording our last album back in the fall of 2014.

Danny Rexon: I do agree it comes down to “just” finding two new guitarists and keep going but there’s a lot of work involved with this too. And in the end, it has to feel right from a personal and professional standpoint to work. But sure, I don’t want to totally write off the possibility that we can find new guys that will fit in like a glove. It’s also the case of how the community of fans, agents and media will accept the new situation. I wouldn’t be interested in doing a lot of work in finding new guitar players just to start all over from scratch with the band, playing small clubs and selling 1,000 album copies if that is to be the case. It may sound arrogant but I just don’t think I would be able to put my soul into it if we’d have to take a lot of steps back first and depending on how long it will take to get back on track, that might be a reality. The music community can be quite cruel in that respect. But maybe that’s just me feeling a bit pessimistic right now.

Sleaze Roxx: 2014 saw the release of Crazy Lixx’s self-titled record which appeared to receive critical acclaim worldwide including from Sleaze Roxx. It has been about nine months since the release of that album. How do you think that the record has fared to date? Did it meet your expectations?

Danny Rexon: Yes, we were all really happy with the result of the album and the reception from fans and media. However, considering the situation with members, we were unable to follow it up with proper marketing, which is something I’m not totally happy about. We did manage to record two music videos this time around, which we haven’t done before, but we had plans for more stuff that just wasn’t possible when one of our guitar players was hundreds of kilometers away. But when it comes to the songs, performance and sound of the album, I personally think it’s our best to date. 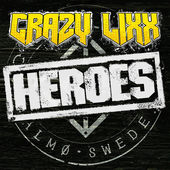 Danny Rexon: Just a fun experiment really. We felt that it was a good song that would make a cool rock cover and also, of course, we knew it had a good chance of winning the entire contest. We hadn’t released any covers before and we kind of saw this as a chance to perhaps reach out to a different audience, one that wouldn’t normally identify themselves as rockers of metal heads and maybe gain a few new fans in the process. In addition, the singer of the original song is from the same place in Sweden as us so I guess a bit of local patriotic pride went in there too.

Sleaze Roxx: Crazy Lixx have been around for over ten years now. Has the music scene in both Sweden and the rest of the world changed since the band’s inception and if so, in what ways?

Danny Rexon: Shortly put — making money from music has become harder and harder. When we started out, there was still the general idea that if you got signed by a record company, you were set. That just isn’t the case anymore. When it comes to our specific genre, it has definitely reached its peak a couple of years ago and is now on the decline at least in Sweden. We rarely play in Sweden anymore and instead we’ve been expanding our fan base in central and southern Europe and the US.

Sleaze Roxx: Speaking of the States, although the band’s been around for a long time, you have yet to tour there. What has kept the band back from touring the States?

Danny Rexon: We’ve really, really always wanted to come to the US but the economy just doesn’t add up, at least not with the deals we’ve been offered. It’s not that we avoid the States. On the contrary, touring there has been one of our long time goals, but it just hasn’t worked itself out between the band, agents and venues. If we do get the band back on track, I promise that US shows will be high on the priority list.

Sleaze Roxx: You have previously mentioned in other interviews that you would love to do a tour with H.E.A.T. and Hardcore Superstar. Have there ever been any serious talks with those bands about doing such a tour and if so, how far did they get?

Danny Rexon: No, not really. We’ve played with both of them on numerous occasions but never as part of an organized tour package. But again, perhaps something for the future. How about Hardcore Superstar, H.E.A.T. and Crazy Lixx in the US?

Sleaze Roxx: That would be amazing! Whether you like to admit it or not, Crazy Lixx have had a big impact on sleaze / glam rock in the last ten years. If the band decides to call it quits today, what do you think will be Crazy Lixx’s legacy?

Danny Rexon:  I think we’ve put out a few good albums and some classic sleaze rock anthems and I would hope that they will live on among, if nothing else, a small committed group of fans. Also, I’ve seen a few people tattooing phrases from our songs on their body and that’s something I can take great pride in. The thought of me sitting at home with my old acoustic guitar, playing some riffs and scribbling down some words on paper, which down the line becomes a song that we record and release, and then someone feels so deeply about my lyrics that they want to brand themselves for life with them — for me, that’s big and still a bit hard to grasp.