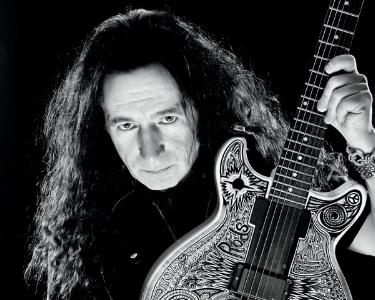 David ‘Rock’ Feinstein is one of the original members of Elf, the band that also featured his cousin Ronnie James Dio. David eventually went his separate ways and formed his own band The Rods, which he played guitar and sang for. Throughout the years David has also issued some solo material and he is about to issue a new album entitled Bitten By The Beast. The album features a track inspired by the emotion he felt during Ronnie James Dio’s battle with cancer. Ronnie also made one of his last musical appearances on the CD during a song that he was made to sing entitled “Metal Will Never Die”. Enjoy this informative and candid interview with David “Rock” Feinstein, and don’t forget to pick up his album Bitten By The Beast on November 23rd, 2010.

Sleaze Roxx: I recently heard your album Bitten By The Beast. It has a good mix of hard rock and traditional metal — there’s a lot of variety on the record.

David ‘Rock’ Feinstein: Right, it does have a good mix of songs. I didn’t want to just do one style… I didn’t try to stick to just one particular style. I agree with what you said, there is variation on the album. Some of the songs are a little bit more modern and others are old school hard rock. I basically stuck to the stuff that is me and I can’t do anything else. A song like “Rock’s Boogie” is an off-the-wall, old school kind of song — some of the others are different than that. I know exactly what you are saying, Bitten By The Beast is a hard rocking record with some heavy metal elements.

Sleaze Roxx: One of the standout moments on Bitten By The Beast is the track that you wrote and the late great Ronnie James Dio sang on, “Metal Will Never Die”. Some of the others that I really love are “Rock’s Boogie”, “Give Me Mercy”, and I also love “Gambler, Gambler”. Is that particular song a new track written for this record — it sounds vintage ’70s, that’s why I ask.

David ‘Rock’ Feinstein: “Gambler, Gambler” is actually an Elf song — a lot of the songs off the first Elf album are really great and I thought I should re-record it. It’s just such a great song, I hear comments from people about that song in particular. People in conversation or interviews say stuff like, ‘I really liked that Elf song “Gambler, Gambler”.’ If you listen to the original song you’ll hear that the arrangement is the same. The song works just as well now as it did back then. The original obviously features Ronnie’s vocals, and there are keyboards on it, but it’s basically the same.

Sleaze Roxx: Was the track “Metal Will Never Die” written a while back or was it specifically written for Bitten By The Beast?

David ‘Rock’ Feinstein: It was funny… in the last ten years or so Ronnie and I had spoken more than we had previously. He was tied up with Dio and Heaven And Hell and I was doing my solo albums and doing stuff with The Rods. It was around that time that we started to reconnect and that Ronnie said, “Dave I’d really like to sing on your solo album or on a Rods album.” I thought that would be awesome but Ronnie lives 3,000 miles away, this is going to be tough. His schedule was so demanding with Dio alone that when Heaven And Hell took off it just seemed for him to have the time to cut a track or two would have been out of the question. A couple years ago he was making regular visits back home to see his parents and he said, “Hey Dave I’ll be around for a few days this visit, I have the time to do a couple songs.” It was at that very time that Carl Canedy (The Rods, drummer) was working on songs for the next Rods record. 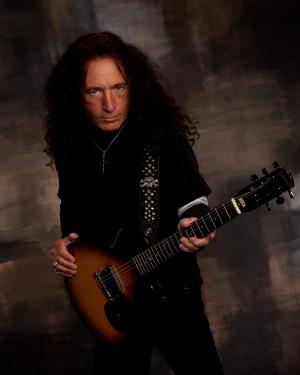 I said to Carl, “We’ve got to pick two songs that would be good for Ronnie to sing. I just wrote a song last night that came from out of the blue for me, it’s called “Metal Will Never Die”. I’d like to do a scratch version before he gets here.” Quickly Carl pulled out his drum machine and laid down some drums and I got the basic guitar and bass tracks on there then laid down some basic vocals — we had a basic demo for Ronnie ready for when he arrived. As we were listening to the demo Carl and I looked at each other and said, “This would be perfect for Ronnie to sing on.” It is eerie thinking back now, I was meant to write this song and Ronnie was meant to sing it. The song was literally written a couple of days before Ronnie arrived and I just love the way it turned out.

Sleaze Roxx: Do you know if “Metal Will Never Die” is Ronnie’s last studio recording?

David ‘Rock’ Feinstein: I really don’t know because I know he was laying down tracks for another Dio album. I don’t know if it was demos or if he had some completed recordings. He recorded “Metal Will Never Die” for my album and he did another track that will likely turn up on The Rods’ next album that will be out in the spring of 2011.

Sleaze Roxx: So there will be some new material from The Rods?

David ‘Rock’ Feinstein: Yeah there will be new music from The Rods. We have an album’s worth of new recordings that we are tentatively planning to release in April or May of 2011. It will contain the other track that Ronnie sang during the same session as “Metal Will Never Die.”

Sleaze Roxx: You’re doing interviews to promote Bitten By The Beast. Will there be an opportunity to present the songs in a live setting in the near future?

David ‘Rock’ Feinstein: I definitely would love to do some live shows. If I go out on tour to do this it would have to be The Rods that would do it with me. The Rods would do the classic songs and then we’d do some new stuff from Bitten By The Beast as well as songs from the new Rods record. We’re excited about this and we’re looking forward to doing some live shows.

Sleaze Roxx: When would this happen, around the release of The Rods’ new album in 2011?

David ‘Rock’ Feinstein: Right now I’m not sure. We don’t have anything booked at the present time. It’s hard to say when that will take place right now but there will be some next year. I would think that to do proper promotion for Bitten By The Beast there would be some dates booked for early 2011.

Sleaze Roxx: What’s the story behind the title Bitten By The Beast?

David ‘Rock’ Feinstein: I was at the movies and I was watching the previews to one of these vampire movies and the title Bitten By The Beast just came to me and I thought, “Hey that would be a great album title.” I had been at work on this album and I had been searching for a title for the album. I think everyone can relate to being bitten by a beast. The beast could be love, an addiction to something, or even a medical problem. Ronnie was bitten by the beast with the beast being cancer. So the beast can be many things and people can relate to that. It just seemed like a fitting title for the album.

Sleaze Roxx: I was wondering if there a link between the title and Ronnie’s illness.

David ‘Rock’ Feinstein: I was working on the album when Ronnie was diagnosed. Some of the songs and some of the lyrics were inspired by the emotion that I was feeling at the time. Some of the songs do have that relationship there, like “Kill The Demon.” That song first started as a song about someone that had a heroin addiction. Ronnie was on my mind as I recorded this album that it took a direction of a person fighting the demon called cancer. I think you’re right about the influence because that is how my mind was working at that time.

Sleaze Roxx: Dave thank you very much for your time and I wish you the best with your new album Bitten By The Beast.

David ‘Rock’ Feinstein: Hey thank you talking to me.