WILLIAM HOWELL IS KNOWN FOR HIS WORK WITH KNAC TO PEOPLE IN HARD ROCK AND METAL CIRCLES. HE’S BETTER KNOWN AS SIMPLY ‘DJ WILL.’ THE MAN HAS WORKED AS A DJ. HE’S WORKED WITH METAL BLADE RECORDS. HE’S WORKED BEHIND THE SCENES WITH (THE NOW DEFUNCT) ‘ROCKLINE’ RADIO SHOW. HE’S WORKED WITH THE VH-1 CLASSIC ‘THAT METAL SHOW’ AND SO MUCH MORE! THOUGH THE MAN WITNESSED THE HEYDAY OF THE SUNSET STRIP IN ALL ITS ‘GLAMMY GLORY’, DJ WILL CLAIMS TO HAVE NEVER WORE SPANDEX  OR MAKE UP. FRANKLY, I BELIEVE HIM! 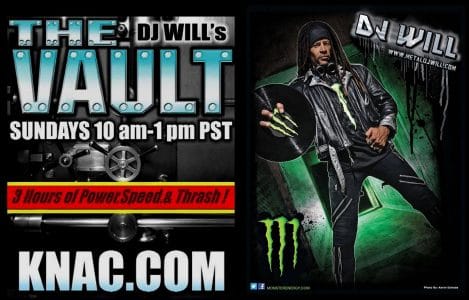 HE IS HOWEVER GUILTY OF WATCHING ALMOST EVERY BAND THAT PERFORMED LIVE DURING THE HOLLYWOOD ‘HAIR SPRAY’ ERA. DJ WILL TOOK SOME TIME FROM HIS BUSY SCHEDULE TO CHAT WITH SLEAZE ROXX ABOUT HIS PREVIOUS WORK AMONGST OTHER THINGS. YOU CAN CATCH DJ WILL’S WEEKLY RADIO SHOW ON KNAC.COM ON SUNDAYS AT 10:00 AM PST.

Sleaze Roxx: What’s your first memory discovering heavy music? Was your love of the genre something that your family supported?

DJ Will: That honour goes to my mother. She owned a lot of rock records in the ’70s and I would go through her collection from time to time and dig out the records with the “cool” looking covers without knowing who most of them were or sounded like. Basically a lot of it was trial and error until I heard Deep Purple, Black Sabbath and Led Zeppelin for the first time… I was hooked!

Sleaze Roxx: You worked for Metal Blade Records during the label’s early years. How did you get involved with the label? How much racial prejudice did you experience back in the day?

DJ Will: Brian Slagel gave me my first job in the biz and being heavily into the tape trading world back then, it’s what got his attention… That and “pestering” [laughs] him at almost every metal show I’d go to until he offered me a position going through the mountain of demos sent to the offices.

As far as the “prejudice/racism” part of your question — hell, that’s still a constant in 2016! But really when I came to the scene, I didn’t get hit with a lot of it but it was there. To me, it was always and still is about the “music.” Performances and being a fan first, rather than judge the person next to me if their appearance differs from mine. I could care less. At a concert or in the clubs I’m just like everyone else, except a bit taller! 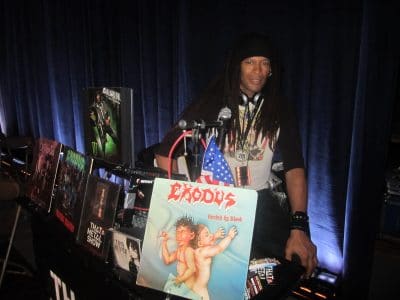 Sleaze Roxx: What bands did you sign and who did you try to but couldn’t at the time?

DJ Will: Well, I put together a bunch of the ‘Metal Massacre’ compilations after Brian paved the way in the beginning selecting the bands with each installment. Sacred Reich, Anvil, Banshee, Princess Pang…. I tried hard to get Prong, Watchtower and a few others but my real big one wasn’t even metal and that was The Goo Goo Dolls. The Capitol Records era was tough in making a stab at Sunset Strip bands as that chapter was quietly coming to a close circa ‘92-’93. The Butthole Surfers from Texas… I oversaw Exodus for two releases and was very happy we had a bunch of rock/metal acts on the label. However, it wasn’t going to last long in the support department. Just look at Wildside, W.A.S.P. and Great White as examples. I recall the VP then passed on Nirvana, Ice Cube as a solo artist, and Rage [Against The Machine] if you can believe that? Too much up front money, contract reasons or budgets restraints… I can’t recall 100% but I was certain those three were on the table in our meetings.

Sleaze Roxx: How did you get in the radio business? You’ve worked with KNAC and also worked on Rockline.

DJ Will: The owners of the .com era of KNAC asked me if I wanted to pick up some shifts once they were out of the clutches of Clear Channel and 15 years later, I haven’t stopped! Rockline, which was wildly different, was short lived for me although it had a long, long history on American Radio Airwaves as the longest running specialty show. I worked under producer Gregg Journingan and host Bob Coburn for its final six years until BC shut it down in 2014. 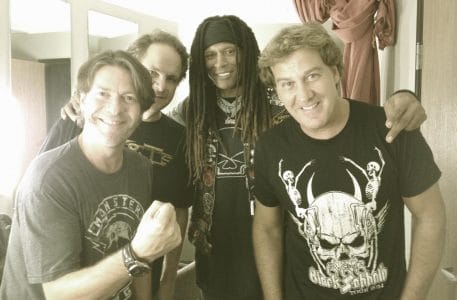 Sleaze Roxx: You were a behind the scenes guy on ‘That Metal Show.’ How did you land that gig and if you can explain to the readers what your role was on the show?

DJ Will: I presented a proposal to the producers and they found a role for me on the show. When ‘That Metal Show’ first came to L.A., I noticed a void missing with the guests and their music during the tapings. Turns out VH-1 Classic couldn’t air copyrighted songs for broadcast as it pertains to ‘That Metal Show.’ That’s why all the featured drummers, bassists and guitarists who come on can only “noodle” and improvise. That didn’t prevent me from mixing up selections to the taping audience and getting creative during breaks. Once I knew who the guests were in advance, I had all of their music ready to go. While I was exclusively off camera, there have been a few times when I was referenced by the hosts and in some rare instances, I’ve submitted some of the “Stump” trivia questions that have been used. I really miss that gig as well and the crew on both coasts. Hoping it will get picked back up.

Sleaze Roxx: Which gets under your skin most — podcasters with a ‘radio voice’ or bloggers that think they’re ‘journalists?’

DJ Will: [laughs] I would say bloggers. The ones with a sense of entitlement and or have little to no true credibility are the worst. Often just anonymous “keyboard warriors” who are welcome to their opinions and critiques but never should be taken serious. “Shock value click bait!” As far as podcasters in general, I love the long form open uncensored discussions. They’re perfect for long drives, trips, etc. 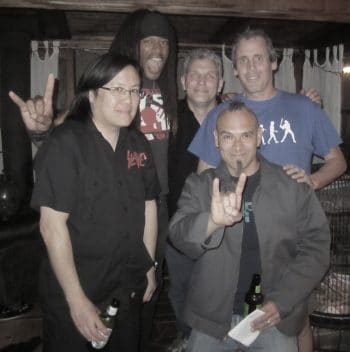 DJ Will: Mostly a lot of record biz folks — the ones that were out for themselves especially in the ’90s pre-Napster era. That’s a long list! On the flip side, so many other managers, photographers, musicians, former retail staffers who are still “lifers” and I respect that in this “shell of its former self” music biz climate but the following three come to mind for different reasons. Monte Conner [then Roadrunner, now Nuclear Blast Records] really put in the work from being a college DJ to one of the more reputable people in metal and knows how to adapt with the times. Doug Goodman, who was Slayer’s first tour manager [he later worked with Jane’s Addiction and Green Day] — I met him working for Ron Boutwell [KISS]. He’s a total straight shooter and is very good at his job. I don’t think we’ve butted head once in 30 years. Joey Vera, the bassist for Armored Saint and Fates Warning — same guy minus the hair! I’ve known him for 34 years, hard working, family man and versatile. I’ve always liked his work ethic in and out of the bands.

Sleaze Roxx: Place ‘Appetite For Destruction,’ ‘Faster Pussycat,’ ‘L.A. Guns’ and ‘Look What the Cat Dragged In’ in order from favorite to least favorite and tell us why you placed them where you did?

DJ Will: 1) ‘Appetite’ — A classic. Ground breaking. Game changer. 2) ‘L.A. Guns’ — The GNR connection… Great songs but not as good as GNR’s ‘Appetite.’ 3) ‘Faster Pussycat’ — An excellent debut. Could have used more support from Elektra. 4) ‘Look What The Cat Dragged In’ — From the album cover to the videos to the millions sold, the songs were there but it was image overload and well… that was the point!

Sleaze Roxx: Who is the best live veteran band or artist out there right now, and why?

DJ Will: Michael Monroe… Hands down one of the best solo performers period. Pure Energy on 10+ for 90 minutes! Kix — They understand how not to oversaturate. They were good in the ’80s and still are amazing in the 2000s! Iron Maiden — C’mon, it’s Iron Maiden!

Sleaze Roxx: What band or artist out there you feel is a hidden gem and why?

Dj Will: Rival Sons — Nice throw back sound, solid vocals and they keep improving with every release. Danko Jones — Love his energy, spirit and rock n’ roll sense of humour. Hardcore Superstar — It’s insane that they’ve been around almost 20 years but off the radar in a lot of ways. Their recent US tour has helped break that in some way. Again something is in the water in Sweden with yet another export just killing it. 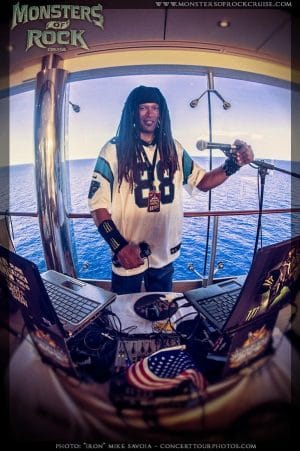 Sleaze Roxx: What’s your take on Babymetal? There’s a lot of hype behind them.

DJ Will: Ehhh. I’ve seen ‘em… I get the hype but really? How long can they sustain that long-term? They’re no Pink Lady! [laughs]

DJ Will: Great question… My hope is that the Monsters of Rock Cruise will continue to thrive so long as the fan base is there to support it and yes, the bands that make up the bulk of the cruise line-ups are at the top of the list. In my opinion, West Coast was long overdue. Since its inception, they always sailed out of Florida and a West Coast version was simply the logical next step for two reasons: (a) There was a high market demand; and, (b) Like myself, the majority of all the bands are already based out here to begin with.

Sleaze Roxx: What do you think of the term ‘Hair Band?’ Do you take that as derogatory? I’ve heard people refer to the ’80s rock bands as ‘Butt Rock.’ I really don’t know what that means…

DJ Will: It’s a quick stereotypical reference. It gets an instant reaction from anyone hearing that and has been debated to death. At this point, all bands that fall under that stigma should see it as a term of endearment and embrace it. Even if its origins are that of image over substance.

Sleaze Roxx: What will you do if the Rainbow goes away and turns into another hotel on the sunset strip?

DJ Will: Jesus… Hoping that day never ever happens. Way too much history, plus I like working there. It’s bad enough there are already more bands here than venues for them to play at… Why take away another famous spot to go to as well?