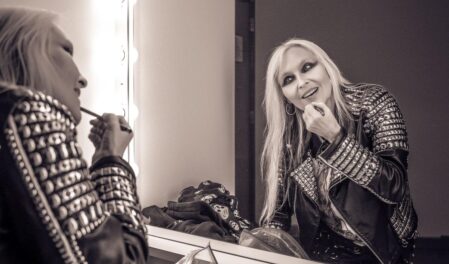 I’ve been a fan of Doro ever since I first heard Warlock’s ‘Burning The Witches’ album. I finally got to see them, at the 9:30 Club in Washington, DC, when they came to the US in support of the ‘Triumph And Agony’ album. They were amazing! A young Doro Pesch hit the stage with an energy and charisma that struck me hard. So hard that I would end up buying every record she ever put out and see her live every time she came anywhere close to me. I mentioned to Doro how, while I’ve seen her live more times than I can even remember, I still get excited to see her perform! That’s not usually the case with most bands. The reason is, Doro still brings that same energy to her performance and the connection she has with the audience is unlike anyone else’s. An energy is passed between Doro and the crowd and then, between the crowd back to Doro. It’s rare and it’s wonderful. 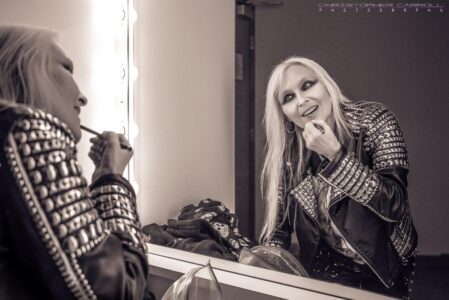 This year, Doro’s first festival was the M3 Rock Festival in Columbia, Maryland, USA. I got to meet up with Doro shortly after her performance. I found her sitting in her dressing room (hair still dry and perfect), munching on a handful of pretzels (I believe) and sitting back, taking a moment to catch her breath. I watched her fix her lipstick. I took a photo and we had a nice talk where I asked her the questions below. As soft spoken as Doro is, she’s never without words and you can hear the excitement in her voice. After all these years, she still truly loves what she does for a living.

Sleaze Roxx:  What is a normal ‘non-tour’ day in the life of Doro?

Doro: I wake up thinking of the fans and go to sleep thinking of the fans!  In between, I go to the studio and record new songs, come up with new ideas. I’ll do promotion stuff but every day is music or a new album or preparing for a tour. I think I did only take off one day in my life over the last 40 years.

Sleaze Roxx: So even on your days off, you are working.

Doro: Well, sometimes I pass out, like after a tour because I’m so exhausted and need some sleep after a long tour.

Sleaze Roxx: You are normally in New York. Is there a studio up there that you always go to?

Doro: It’s actually in New Jersey. I have a place in Florida now after Hurricane Irene and Hurricane Sandy destroyed my place in Long Island. They tried to rebuild it but insurance didn’t pay and it just didn’t work out. Florida is a pretty good place! Nice weather. Usually, in New York, after a tour, it was always cold so Florida is pretty good! And a couple of my band and crew members live in Florida so…. 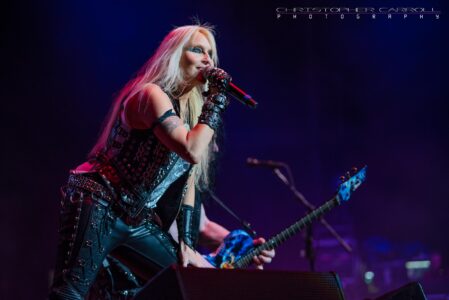 Sleaze Roxx: Yeah, I noticed you were missing a couple of the guys, like your bassist, Nick, who lives in New Jersey.

Doro: Yeah, because it’s still the Covid times. It gets a little tricky but he will be at the next festival. The Orange Loop Festival in Atlantic City, New Jersey. That’s on June 11th.

Sleaze Roxx: You seem to be very good at grabbing people to fill in. You’ve had to do that a lot throughout the world over this Covid period.

Doro: Yes! [Inaudible] is a great guitar player and Mitch, we played for the first time together, yesterday at a little rehearsal.  He was the bass player and I think it worked great. Covid has changed a lot. I’m missing crew members I’ve had for 30 years because they had to change jobs. But now, everything is starting again. We have played a couple of gigs but this was our first festival this year and it was so good!

Sleaze Roxx: Going back to writing, you always write with great people. Who are you writing with these days?

Doro: I still write with Andreas Bruhn, the ex-guitar player of Sisters of Mercy. I met him, I think, in 1986. We’ve always worked good together. Actually, the new bass player we have in Europe, we wrote a new killer song together so that’s a new friendship.  It’s an anthem. It’s good! And I wrote one song with my very first producer from the ‘Hellbound’ album. We met up again and wrote a nice song together. It’s a song for the animals because I love animals. It’s called “Heavenly Creatures.” That will definitely be on the new record I’m planning on putting out next year. Next year, I have my 40th year anniversary so we want to celebrate it big! 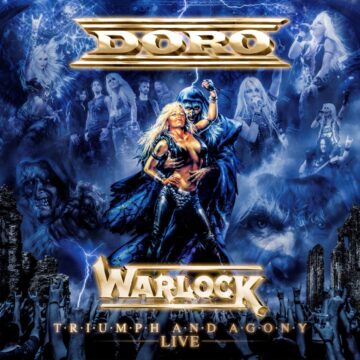 Sleaze Roxx: You had such success with ‘Triumph And Agony’, do you ever think about writing with that producer, Joey Balin, again because you two made an incredible songwriting team.

Doro: I actually did, on the last studio album. We wrote several songs together on the ‘Forever United’ record…. like the last song, “Turn It Up” and we wrote “1,000 Years” together and we are planning on writing more together. We have a good chemistry. And we did some other great songs like “Walking With The Angels” which was a duet with Tarja [Turunen], the ex-singer from Nightwish. We did “Celebrate.” We’ve written several together and we will write more.

Doro: It’s a little more difficult lately, with Covid, to travel and I try to be careful. My mom is 88 so I try to be careful for her. Today [at the M3 Rock Festival], I wasn’t careful! I shook everybody’s hand and everybody spit in my face because they were excited and wanted to tell me that they liked the show. In Europe, they still wear masks but here, almost nobody wears them. Is it really over? I hope!

Doro performing “I Rule The Ruins” live at the M3 Rock Festival in Columbia, Maryland, USA on May 6, 2022 (video from  Jeff Perlin ‘s YouTube page):

Sleaze Roxx: I tried to order the version of ‘Triumph And Agony Live’ that came with the cologne or perfume but I couldn’t seem to get that in the States.

Doro: Right, it came out via my own label, Rare Diamond Productions, but you can’t ship anything with alcohol into the States.  I had a wine and a champagne once and that was even difficult to get into the States because there are so many laws… but the perfume smells awesome!

Sleaze Roxx: So, do the guys and girls smell much different? 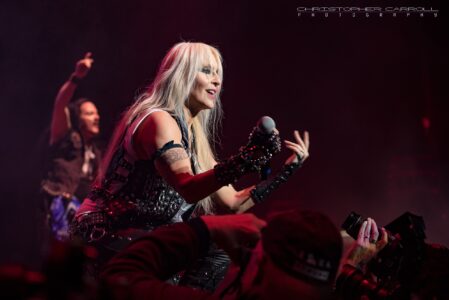 Doro: Yes, they smell a lot different. At first, I just planned to do a lady’s perfume called ‘True At Heart’ and it took me almost 30 years to do that. I think I started in 1993. I was fiddling around with it, mixing all kinds of perfume stuff and oils over many nights and then it came out about 25 years later. Then all the guys were asking if I was going to do one for guys as well. I thought ‘Wow.’ I wasn’t sure anyone would be interested.

Sleaze Roxx: Well, a huge part of your market is men.

Sleaze Roxx: Doro, you have no wrinkles!  You look even better than you did years ago.  What is your secret?

Sleaze Roxx: How long ago was that?

Doro: Five or six years [ago].  I was a vegetarian for many years and then I did a campaign for leather alternatives. I looked into leather production and it’s so cruel.  If you know about it, you never want to wear leather again so then I started thinking, I don’t want to eat anything with a face anymore. That’s how it started and I think it’s good for my skin…. and I gave up smoking a long time ago! I loved to smoke. In Europe, everyone did. The whole band, everybody smoked like three packs a day.

Doro: Yeah… I have been digitizing old interviews and there’s one where the journalist is asking questions and the whole band is just smoking, not even answering! We were insane. But I gave up smoking. I don’t drink. I just love doing music. It makes me so happy! I’m glad to have a job that let’s me do it.

Sleaze Roxx: Well, you have a very dedicated fan base! I’ll tell you, my first concert was [in] fifth grade [not Doro] and I’ve seen so many concerts in my life and sometimes, after you see a band a few times, it loses it’s 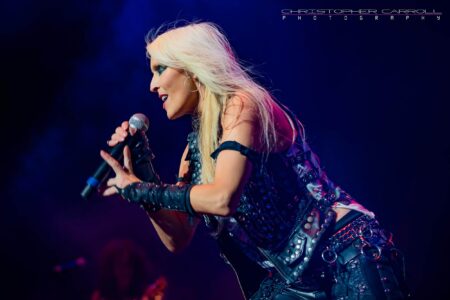 luster but I’ve seen you more times than I can even remember but I never get bored of it!  The energy is so high at your shows and I end up feeling so good!

Doro: Oh??!  It makes me so happy when the audience is happy. I feel something when they get energized. I’ve always felt a deep connection with the fans, even before Warlock. I can’t really describe it. It’s magic. I can appreciate it even more now than I could in the 80’s because, you know, when you are young and living it, you’re a rebel…. but now, I can really deeply appreciate it. I hope I can do it for another 40 years!

Sleaze Roxx: What else do you have going on?

Doro: Festivals, a new album next year, we are always on the socials and Patreon is a new one for me. When I found out about it, I thought it was so cool! Many American fans love it because it’s like your backstage pass! You can see old videos, bootlegs and that inspires me too because they’re the diehard fans! Patreon has many levels so I love that. I always try to think of things to do on there that will make them happy. It gives people an even closer connection. I’ve found so many diehard fans from the 80’s on there. We always have zoom calls. It’s great! It inspires me, it inspires them. There’s also a movie in the making…

Doro: Yeah, yeah… I can’t talk too much about it.

Sleaze Roxx: I won’t tell anybody…

Doro: I can just mention that there is a movie in the making, but no details.

Doro: Thank you for doing this and please let everyone know how excited I am to be out there playing shows. I hope to see you all out on the road!