There’s been a shake-up within the band White Wizzard. Once again Jon Leon has fired several members of the band, including guitarist Erik Kluiber — the last time he did that the sacked members regrouped to form Holy Grail. Sleaze Roxx caught up with Erik again to get his side of the story and he went on record to say that the band was a scam and that this would be the last time he’ll be talking about his time in White Wizzard.

Sleaze Roxx: You recently parted ways with White Wizzard. One thing that struck me as a little odd is that you were the one doing press for the Over The Top album. Not very many ‘new guys’ are thrown out to do these kinds of things. Were you comfortable in that particular role? 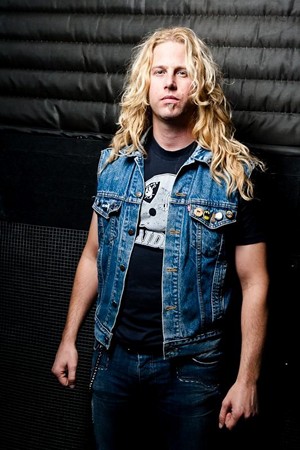 Erik Kluiber: There were a pile of interviews 6 months deep that weren’t being responded to. The label asked me to step up so the band could get some press and not burn bridges.

Sleaze Roxx: When we last caught up, you were very excited about the album. In retrospect how do you really feel about the CD now?

Erik Kluiber: Over The Top turned out well. It’s a fun album. The ‘band’ had a lot to do with taking primitive demos of 3 or 4 riffs repeated over and over and turning them into real songs. We recorded the six studio tracks in two weeks — one week for the music and one week for the vocals. It was a no-bullshit record it the same way as you rehearse it approach. I’m proud of how fast we knocked that out.

Sleaze Roxx: It’s no secret that White Wizzard is Jon Leon’s baby. He however has been portrayed by some former employees as somewhat of a slave driver. Is that the case?

Erik Kluiber: I’d compare him more to a con man. Rehearsal wise, the band had an incredibly relaxed schedule. We didn’t do much except for the five weeks of writing and recording Over The Top and the month of working drummer Giovanni Durst up to speed when he joined the band after Jesse Applehans quit. I’ve been in cover bands with a more intense practice schedule.

Sleaze Roxx: You’re no longer in the band White Wizzard, was the split amicable?

Erik Kluiber: No… but after this interview I’m over it.

Sleaze Roxx: What’s your side of the story?

Erik Kluiber: In my opinion, the band was a scam. I was told this was a professional ‘serious’ outfit. It was like the most unorganized slow paced band I’d ever been a part of. We didn’t do shit! I was told there was going to be heavy touring. Not only did that not happen, but Leon was a no show at the UK debut cause of some medical excuse that changed 3 or 4 times. On the one North American tour we did, the guy wanted us to drop him off at the airport so he could fly home every day. It was pathetic. Our manager Steve booked some more U.S. dates to get from L.A. to New York and back, but Leon vetoed them because he felt they didn’t pay enough. The guy couldn’t fucking tour. We had to move all his gear for him at every show for Christ sake. All we heard every day is, “I’m the boss, I’m the boss.” We were like, “We know already, can you shut up and play your bass?” He’s a fucking diva. 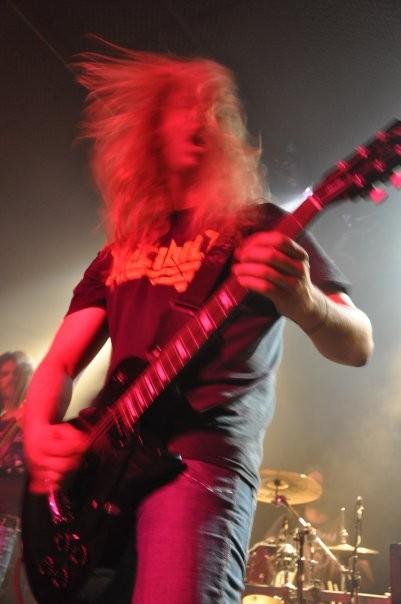 Anything money wise in that band was totally shady. To this day Leon still owes ex-manager Steve Seabury his 10 percent from the Korpiklaani tour. Leon’s the only one on the contract with Earache Records. Who in the hell sets up a ‘band’ where if anything happens, they’re the only one that gets paid? A fucking shyster, that’s who. At the same time, all the ‘band members’ split the band expenses. So figuratively, the racket basically seemed like luring some musicians with the record contract, make them pay for the expenses of being in a band, write and record just like every other band, don’t tour cause that’s too much real work and then take the money and run.

Sleaze Roxx: There are all sorts of crazy allegations like people finding a Craigslist ad looking for their replacement.

Erik Kluiber: Everyone in White Wizzard was replaceable. We were a means to an end and nothing more. Yeah, finding an ad on Craigslist looking for your replacement ‘just in case’ things didn’t work out with you was a regular occurrence.

Sleaze Roxx: Knowing what you know now what would you have done differently?

Erik Kluiber: I would have treated White Wizzard as the part time project it was. I would have kept a much lower profile within the band. I wouldn’t have drank as much around the band. Drinking in Hollywood is best kept amongst close friends who are on the same level and aren’t going to judge you for it. I wouldn’t have gotten involved in any band business at all. Instead, I should have just played guitar and kept it fun. I probably should have left immediately after the Korpiklaani tour. I held on for far too long. I think being on the album and doing the one tour is all White Wizzard really had to offer… for me anyway.

Sleaze Roxx: Your previous band prior to White Wizzard, Overloaded, was a great straightforward rock ‘n’ roll band that ended abruptly. You then signed on with White Wizzard — I imagine you were looking at that gig being a long-term thing. Having lived the ups and downs of the music business how do you feel about pressing forward with music? It must be frustrating to have things fall apart and have the rug pulled right from under you.

Erik Kluiber: Yes and no. True, White Wizzard is signed to a label that’s working hard promoting them, but I was never going to make a dime being in that band. I was literally paying to be in a band led by a guy who was only out for himself. All White Wizzard had to offer was touring, and they’re not doing jack shit compared to bands like Holy Grail or Swashbuckle. I’d like to find a band that has those guys’ touring and work ethic. Being in White Wizzard was kind of like being in a glorified local band.

Erik Kluiber: Right now I’m involved in some small time projects. I don’t know if they’re going to become rock stars but they’re good guys and its fun. One of the bands is a cross between The Doors, The White Stripes and Nirvana. That’s a change of pace from what I’m used to. I’ve been kicking around the idea of starting something from scratch for a while now, and I’m always looking for a good touring band. I’d love to find a cool metal band. There’s been talk of doing another E.P. with Overloaded. We’ll see what happens, it’s up to the metal gods.

Sleaze Roxx: Do you keep in touch with anyone from Overloaded? Or how about any your band mates from White Wizzard?

Erik Kluiber: I just did a show with Overloaded last week in Detroit. It was a lot of fun, the turnout was good and I actually made money (laughs). We got some video of the gig, hopefully we’ll get something up on YouTube. Poor Zo (Lorenzo Gonzalez) burnt his foot in a grease fire the week before so our friend Dan filled in for him on drums. I talk to Chris Gillen and Zo all the time. Like I said earlier, I’d like to take a month off and write some more killer music with those guys.

I still talk to Wyatt Anderson, Steve, and Jesse from the White Wizzard camp. Jesse and I were jamming in a short lived project a month ago or so. I’ve hung out and swapped stories with some of the Holy Grail guys. They’ve always been fellow metal heads. I recently drank with Cameron Davis who did the Over The Top cover artwork and I see video director Davey Vorhes at local rock nights from time to time. I don’t really talk to Chad Bryan or Giovanni anymore, but they’ve always been cool to me the few times I’ve run into them since the split. They’re both good guys and I totally understand it’s not in their best interest to be associated with me.

Sleaze Roxx: Thanks so much for the update Erik. Is there anything you’d like to say to the readers?

Erik Kluiber: Hopefully next time I’ll have something cool to talk about.