Erik Kluiber, guitarist for L.A.’s White Wizzard and formerly of Overloaded, was kind enough to take a few moments to answer some questions recently. White Wizzard has issued a great new EP entitled High Speed GTO and although Erik didn’t join the band in time to play on the EP, he will be featured on the upcoming album entitled Over The Top – which Erik was kind enough to give us some details on. So take a few minutes of your time to read the interview then check out White Wizzard. They are really good…

Sleaze Roxx: You were a member of the band Overloaded who had established a loyal following by receiving some good press nationwide after releasing a couple of solid independently released albums. What happened with Overloaded?

Erik Kluiber: Overloaded established a solid underground following and sold approximately 3500 CDs worldwide during its 4 year career. The problem was that Overloaded hit a glass ceiling. We never got any attention from labels or booking agents. We didn’t have the connections to tour. We were running in circles at full speed getting nowhere. This caused a lot oftension within the band. After 3 years, Chris Gillen and I split from Zo (Lorenzo Gonzalez), Michael Massie, and John Sullens. That was a big mistake. Overloaded should have taken a break. We were all frustratedand pointing fingers at people instead of taking a deep breath.

Chris and I reformed Overloaded with a new lineup. We had good guys in the band, but it was never the same. I don’t think anyone accepted the new lineup and the guys who replaced Zo, Michael and John felt the discourse as well. That lineup fizzled out very quickly. That lineup did record an interesting version of The MC5’s Ramblin Rose that was supposed to be released as part of a big Detroit Tribute to the classic Detroit bands. Unfortunately, that recording was never released. Overloaded performed it’s final show in February of 2009 right before I relocated to Los Angeles. The last show was performed by the original lineup.

Sleaze Roxx: You went from a band that had more in common with Skid Row to a band, White Wizzard, that is more traditional sounding – dare I say more in the vein of old school ‘New Wave Of British Heavy Metal’. Was that a difficult transition for you?

Erik Kluiber: Not at all. I auditioned for White Wizzard because I am a true fan of the music. The reason White Wizzard couldn’t find a suitable lead guitar player right away was because L.A. is a glam metal town filled with pretty boys.

On another note, I believe getting categorized in the Skid Row/Glam Rock scene was what killed any chance of success for Overloaded. Overloaded was way faster and heavier thanthe glam rock bands, but still had elements of rock. Overloaded was not taken seriously in the metal community because it was too rock for metal and too metal for rock.

Sleaze Roxx: Was White Wizzard already an established act when you joined? Or was this something that was started fresh with you and the rest of the guys in the band? 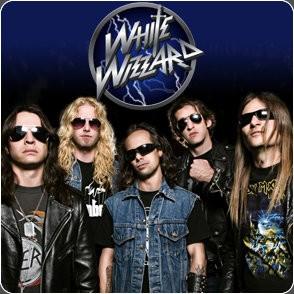 Erik Kluiber: White Wizzard has been around since 2007. The previous lineup recorded the EP, filmed the GTO video that got worldwide international attention, and did a few shows. Apparently thepersonal chemistry was not working and Jon Leon (bass) split from the other guys who then went on to form their own project. Jon kept writing songs and found new members one at atime. I found White Wizzard through an ad on Craigslist when I was searching for good bands because I knew Overloaded was going to die.

Sleaze Roxx: White Wizzard has issued a solid EP, High Speed GTO, on Earache Records. I love it and actually bought it on iTunes weeks before the physical release. I heard the band forthe first time when I picked up an issue of Classic Rock Magazine. It comes with a CD and you guys were on the disc. So why an EP and not a full-length album?

Erik Kluiber: I love the High Speed GTO EP as well. I don’t perform on it, regardless it’s a solid release. The EP is great and deserved to be released, even though the lineup was being reformed. The sound has changed with the new lineup as you can hear from the songs 40 Deuces, Over the Top, and White Wizzard. Those 3 songs were recorded before I joined the band. Jon did all the guitars on those recordings. You do get to hear Wyatt’s voice and Jesse on Drums. Since then, White Wizzard wrote and recorded the remaining songs for the new full length CD entitled Over The Top which will be released on Earache Records February 23rd of 2010.

Sleaze Roxx: Is the music on the EP what we can expect from the full-length album? 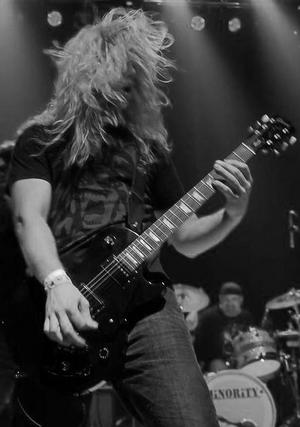 Erik Kluiber: The full Length has some longer more epic sounding songs. I think it has a more raw approach than the EP which had a very technical precision vibe to it. The main ingredients of White Wizzard are still up-tempo songs with uplifting vocals. Over The Top is an album for fans of classic metal, pure and simple.

Sleaze Roxx: You’ll be touring behind the EP this winter. Who will you be supporting and what can we expect to hear in the set?

Erik Kluiber: White Wizzard is supporting Korpiklaani, Tyr, and Swashbuckle in January on a North American tour that covers the East and West Coast, and parts of the Midwest and Canada. We will be performing select tracks from both the High Speed GTO EP and forthcoming Over The Top CD.

Sleaze Roxx: How long do you foresee the band being on the road?

Erik Kluiber: White Wizzard should be touring heavily in both North America and Europe throughout 2010.

Sleaze Roxx: What would be a band that you’d love to tour with, and Why?

Erik Kluiber: White Wizzard would be a perfect opener for legends Iron Maiden or Judas Priest. Not only are both bands huge inspirations for us, but White Wizzard could deliver a powerful set that fans of Priest and Maiden would appreciate. White Wizzard is a much better opener than say Pop Evil who supported Judas Priest on their recent North American tour.

Sleaze Roxx: Any parting words for our readers?

Thanks to Erik Kluiber and Ruben Mosqueda.