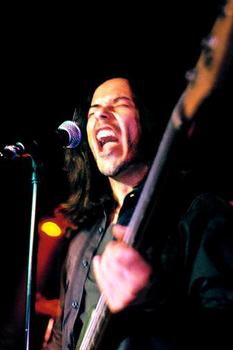 Over twenty years in the music business is a long time to go relatively unnoticed. For bassist Freddy Villano however, it wasn’t due to lack of effort. In the mid 1990’s, he toured with Dee Snider’s Widowmaker and Quiet Riot, and this year released a collection of songs that his original band Holy Water recorded through the last three decades, some of which were produced by founding Foreigner member Al Greenwood. In this exclusive interview, Freddy talks about the latest Holy Water CD ‘The Collected Sessions’ and reveals that the he is working on new albums with both Holy Water and his more experimental band Gaggle Of Cocks.

Sleaze Roxx: How did the Collected Sessions CD come together?

Freddy Villano: For years I had wanted to properly record all of the Holy Water material that was never documented back in the ’90’s. In 2007 I finally started to get the band back together and record some stuff. While we were recording I started posting all of the old demos and sessions on myspace and we started getting some positive feedback from labels. So we decided to release the tunes that were never released legitimately in the first place, which would allow us to continue working on a new record. So it was a minor detour from the current recording process, but well worth it.

Sleaze Roxx: So The Collected Sessions is just a teaser before you release some brand new material?

Freddy Villano: I guess you can look at it that way. We won’t be rerecording anything from The Collected Sessions and there are two new songs on there, “All I Need” and the Stevie Wonder song, “Living For The City,” both of which we did back in the day. But we had/have about seven other tunes that we never recorded that were probably, I like to think, our best stuff. So we’re working on those and we’ll write a few new ones. My hope is to put it out next year.

Sleaze Roxx: Will the new songs be in the same vein as the two new tracks on The Collected Sessions?

Freddy Villano: That’s good question. Actually the new stuff is probably going to surprise everyone. I wouldn’t say it’ll sound like those two songs. Those were a bit of an experiment production-wise. When you don’t have a label telling you who to be there’s a lot of room to play around and be creative. The new record will hopefully, if all goes according to plan, be Holy Water in its truest, most pure, stripped down sense.

Sleaze Roxx: Do you plan on releasing the new CD through Perris Records too?

Freddy Villano: Wow, I’m not even thinking that far ahead yet. We’re still editing some rhythm tracks and concentrating on the music. Tom Mathers has been great, so I don’t see why we wouldn’t unless he’s not interested.

Sleaze Roxx: How did you get hooked up with Tom and Perris to begin with? 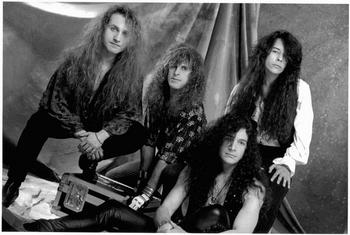 Freddy Villano: I sent him The Green Machine Sessions, the first three songs from The Collected Sessions, which he never got. When I sent a follow-up e-mail asking if he received my submission I included the myspace link. He responded to that.

About the new tunes, I would say that Dave’s vocal ability and melodies will be the common thread. The music itself and the production will be heavier and rawer.

Sleaze Roxx: That’s good to hear, because my favorite song is “Some Things Have To Happen”, which is probably the heaviest track on The Collected Sessions, yet it still has that huge AOR production to it.

Freddy Villano: Exactly… and it’s probably even a little ‘over-produced’ for my personal taste. We are stripping everything down to the bare essentials.

Sleaze Roxx: About that song, it was released a few years back under the moniker of The Brewz. What’s the story behind the differing band names?

Freddy Villano: We were Holy Water back in the early ’90’s, but we went through a few name changes even back then. When I started toying with the idea of re-releasing this stuff, The Brewz was my failed attempt at sounding more contemporary. I had taken a great photo in Florence Italy years ago and The Brewz was graffitied on the wall in the picture. Anyway, when it came time to finally do this Holy Water seemed to be the most legitimate moniker we’d ever had and there were some people out there who already had the three song Green Machine tapes, so we figured let’s just be who we are…

Sleaze Roxx: Looking through the liner notes of the new CD, it looks as if the line-up changed lots over the years. Is there a version of the band that you would consider the definitive Holy Water?

Freddy Villano: The most definitive back then was definitely the Green Machine Sessions – Me, David Knight, Tom Jude, Chuck Bonfante and Al Greenwood. But really Tom, Dave and I have been the common denominators. So the new CD is the three of us with Bobby Marks on drums.

Tom and I probably played with every drummer in NY before we even met Dave.

Sleaze Roxx: Is that where the links to Doro Pesch, Quiet Riot, Widowmaker, Saraya, Prong, Foreigner, etc come from?

Freddy Villano: Yes. Thomas Jude played in Doro on tour in support of her 1990 self-titled release. Chuck was with Saraya. Al was with Foreigner. After Holy Water I played bass with Widowmaker, Quiet Riot and Bill Rettie, who played keys live with us towards the end, eventually went on to play with Prong.

Sleaze Roxx: What was it like playing with legends such as Dee Snider and Kevin DuBrow?

Freddy Villano: Amazing. I had already been playing for a while when I hooked up with those bands, but that was really my live musical education. Touring playing seven nights a week. Quiet Riot liked to stretch out and jam on tunes live, so that was cool. Widowmaker was Al Pitrelli on guitar and Joe Franco on drums, so that was like a musical education in itself playing with those guys…

Sleaze Roxx: Kevin DuBrow often got a bad rap because of his outspoken nature, but what was he really like?

Freddy Villano: Outspoken… LOL! Look Kevin gave me the opportunity of a lifetime, so whatever led to my dismissal from Quiet Riot is water under the bridge at this point. I love those guys and continued to go see them play even after I was out of the band and Kevin always welcomed me backstage with open arms and a big hug. I remember one time going to see them play and he saw me in the audience and pointed to the side entrance to the stage. When he had a moment, during a guitar solo or something, he ran down and brought me backstage and let me hang out there for the rest of the show. Those are the things I will always remember about Kevin.

Sleaze Roxx: In a situation like that, is it difficult for someone like yourself to feel like you are fitting in when an original member could return at any time resulting in you losing the gig? 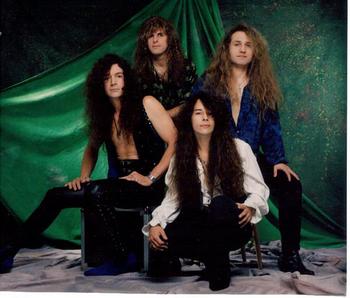 Freddy Villano: Well, I did feel creatively stifled. I was there to do a job. I wasn’t there for my creative input. It’s what eventually led me to go back to school, educate myself further, and take my own creative potential more seriously. It’s been a long, sometimes hard road. I could’ve continued down the path of being a hired gun, there were offers to audition and/or play with other bands at that time but I was more interested in the adventure of creating music rather than just playing music.

Sleaze Roxx: In the mid 90s when you played with Quiet Riot and Widowmaker was a rough time for hard rock. How difficult was it to get noticed and get people out to gigs?

Freddy Villano: That’s funny. I remember with Quiet Riot our tour ran through Seattle. This is like at the height of the grunge era and we were really preparing for the worst. Would you believe it was probably one of our best markets in all my time playing with them? I think we played Seattle twice while I was with the band and it was always packed.

Sleaze Roxx: Is it true you once played with Tangier’s Gary Saint as well? If so, did anything ever come of that?

Freddy Villano: Wow… you do your homework. We had a great band with Mark Edwards on drums, a three-piece. We were called WAIF. We recorded a bunch of demos that never saw the light of day. Maybe someday we’ll revisit that stuff and put it out too. Me and Saint are still buds to this day, by the way…

Sleaze Roxx: One of the first CDs I ever got sent to review was a band named Gaggle Of Cocks. What a departure that is from Holy Water, was that your experimental phase?

Freddy Villano: Still is my experimental phase. We’re working on a new CD as well. Gaggle Of Cocks was my ‘fuck you’ to the music business. American Trash was re-released last year on Screaming Ferret/Locomotive. So we used that as incentive to start writing a new record. We have most of the tunes written and demoed. It’s a major, major progression from American Trash. I have one of your blurbs about the CD on www.myspace.com.

Sleaze Roxx: Speaking of the music business. You’ve been recording music for 30 years now, and in the 80s if you didn’t get signed you had a hard time getting heard. Now getting signed is easy and people steal your music online. Does the artist ever win?

Freddy Villano: No. You gotta do this for the love of it. Anything else is gravy.

Sleaze Roxx: But do you ever wonder to yourself, ‘why even bother’?

Freddy Villano: It’s just in the veins. It’s not about being rich or commercially successful for me. It’s about being an artist and making art is what I do. To do anything else just doesn’t make sense to me. Being creative is one of the greatest gifts we have as humans and I don’t want to squander that by catering to the whims of others.

Gaggle Of Cocks are a great example. People either love it or hate, there’s no in between. As an artist you make art in the hopes that it’s provocative. Whether it provokes people negatively or positively is out of my control. But I can respect someone who will take the time to write a negative review. It at least moved them enough.

Thanks to Freddy Villano