ONE LISTEN TO FRONTBACK’S DEBUT ALBUM ‘BORN WITH A SECRET’ AND YOU’LL KNOW THAT THE BAND HAS ALREADY MASTERED HOW TO PLAY CATCHY HOOK LADEN ROCK AND ROLL. WITH FRONTBACK SLATED TO RELEASE THEIR SOPHOMORE ALBUM IN 2016, SLEAZE ROXX CAUGHT UP WITH ALL FOUR MEMBERS OF THE BAND — SINGER/RHYTHM GUITARIST ANLO FRONT, LEAD GUITARIST AXEL GRANESKOG, BASSIST JONAS PERSSON AND DRUMMER KOFFE STRIDH —  TO DISCUSS THE NEW ALBUM AND MUCH MORE!

Sleaze Roxx: Frontback are slated to release a new album in early 2016. What can we expect to hear on the new album and how you would compare it to ‘Born With A Secret?’ 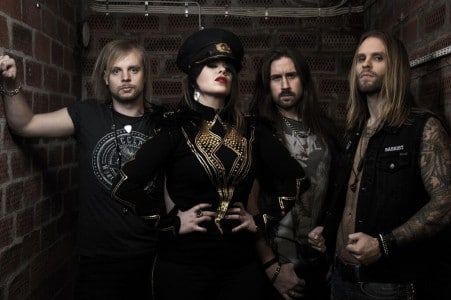 Frontback: The new album is a very energic, catchy, rocky and we think, in a kind of a way, heavier album. We all feel very proud of the new songs and can’t wait until the release! Anlo used to write sad lyrics but on this album, there will be a little more anger and scream in her voice that she didn’t show on the first album.

Sleaze Roxx: Frontback have been around for a long time prior to the release of ‘Born With A Secret.’ In this day and age where bands can release albums on their own with “relative” ease, why did it take so long to release your first album?

Frontback: The problem was that the members changed a few times before the record was released, and that is the reason why the record took so long time. After ‘Born With a Secret’, Anlo and Axel stood without a drummer or a bass player. That is why our process has been so much longer than expected but, together with Koffe and Jonas, we now feel stronger than ever!

Sleaze Roxx: It would seem that you have had a lot less time to come up with new songs compared to prior to ‘Born With A Secret’ which was a decade in the making. Do you agree and how will this impact the new album?

Frontback: We have been creating the new songs with a lot of energy and it was much easier this time since all the members have the same goal with the band! So the creating of the songs actually didn’t take so much time. We’re all really excited to show you guys!

Sleaze Roxx: One big difference between ‘Born With A Secret’ and the new upcoming album is that Frontback now has a deal with Swedish record label Dead End Exit. How did the record deal come about and what will the backing of a record label mean for the new record? 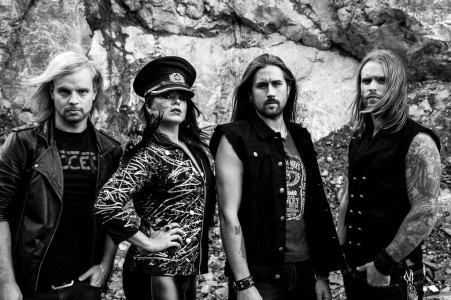 Frontback: Actually, we had quite a big tour last autumn for us. Both outside and inside Sweden and the record label noticed us at that time so after that they wanted to hear us live. So we went down with the band to play at the legendary club KB in Malmo. That was a thrill! After the show, they welcomed us with open arms and we felt really welcome and have a great relationsship with them now! With their help, we should be able to spread our music really well with our new album.

Frontback: Thank you! Maybe it’s just a coincidence [laughs]. We feel the same about bands from other countries! We truly believe that it is the people in the band that have to work well together to make great music! That is the recipe for a successful band!

Sleaze Roxx: In an interview with Sleaze Roxx a couple of months ago, Danny Rexon of Crazy Lixx stated: “When it comes to our specific genre, it has definitely reached its peak a couple of years ago and is now on the decline at least in Sweden.”  Do you agree or disagree with what Rexon stated and why?

Frontback: We don’t feel that the interest of our genre of music is smaller now than before. However, the challenge today is that everything including music and videos is so easily available online which makes it harder and harder for bands to fill venues because people simply do not have to leave their homes to be able to both see and hear their favourite bands. This is a challenge we welcome and still believe that live music cannot be replaced by youtube or different social media platforms.

Sleaze Roxx: Can you please take me through the band’s history including how you got formed in the first place?

Frontback: It all started when Anlo started playing guitar and felt that this was something that she was made to do, to sing and play in a rock band! It took several members to find the right ones but she’s very happy to have played with all of them. In that way, she always has been able to spread the music! When she found a great guitar player and soulmate in Axel, it felt like it started for real! We made “Born With A Secret” together with the old bandmates. After the album was done, two of the members felt that they wanted to spend more time with their families. So, once again Frontback was missing some members but then we met the great Koffe and Jonas. So here we are, ready to release our second awesome new album! 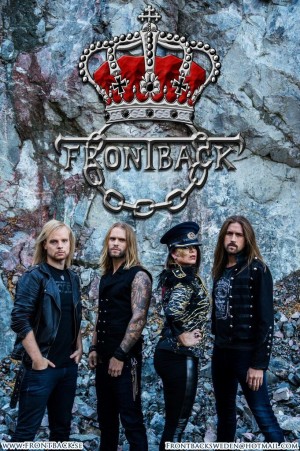 Sleaze Roxx: How did you come up with the name Frontback?

Frontback: Actually, that would be a big big dream come true for us! After the album is released and done, we’re planning to book a lot of dates and who knows, if we got really lucky, we’ll be able to play North America at some point!

Sleaze Roxx: I found a lot of similarities with Frontback’s sound on ‘Born With A Secret’ with American rockers Hessler’s sound on their 2012 album ‘Comes With The Territory’ which had Polish singer Lariyah Daniels on vocals. Are you familiar with Hessler and if so, do you agree with my observations and why?

Frontback: Actually never heard of them but we are for sure gonna check them out!

Sleaze Roxx: Is there anything that we have not covered that you would like to mention?

Frontback: Keep a look out for our next album, which will be released in the spring of 2016. We are proud of all the tracks which have been picked out for this record and hope that all the fans and media will appreciate what we have accomplished. This is truly a record we feel really confident and proud of.

Sleaze Roxx: Last question for each of you — what are your three all-time favorite albums and why?

Frontback: We all have quite big varied music tastes so I think we need to say which artists we are into. That would be all from Green Day, The Hives, Iron Maiden, Accept, Black Sabbath, Def Leppard, Annihilator, Steel Panther and Freak Kitchen.