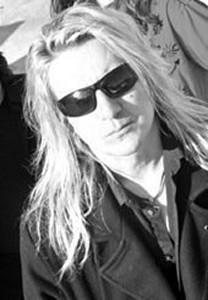 It’s always a privilege to meet artists and keep in touch with them, especially when they are touring. This time it happened while Rhino Bucket was on tour throughout Europe earlier this year, and even though the sun didn’t shine that much and the weather was cool it was Rhino Bucket’s live shows that heated everyone up. Right after New Years isn’t usually the perfect time to tour — everyone is a bit tired after all — but Rhino Bucket didn’t give a fuck, playing roughly 50 shows in 60 days in support of their new CD ‘Who’s Got Mine’.

During that European adventure Sleaze Roxx had the honor to interview Rhino Bucket frontman Georg Dolivo — a very open-minded and down-to-earth person who is a crazed fan of British soccer team Manchester United (and also German team Schalke 04). Right before their show, and right after a meal, it was time for a little chat in a club named Tiki Bar — only a few steps away from the stage of Berlin’s underground Wild At Heart Club. Dolivo, who lives in Los Angeles, made the chat easy because he is a rocker that likes to talk, unlike some other musicians who just sit and stare… so here we go!

Sleaze Roxx: You were born in Finland…

Georg Dolivo: Yes, in Helsinki — and I was very young, about 5 years old, when my parents moved to America. But every year I come back to Finland for about three months. I’m not a U.S. citizen — I went to school and joined the Army in Finland and I worked there for a couple of years — so I got the best of both worlds, Los Angeles during winter and Finland during summer… that’s fantastic. My grandparents want me to be there for the summer and pay for the flights, and so my mom got to get a break from me.

Sleaze Roxx: How would you describe the differences between America and Europe?

Georg Dolivo: There are many things in America that I love and miss when I’m in Finland and vice versa. But you have to take each place for what it is, you know?

Sleaze Roxx: Do you see differences between the two, such as health care?

Georg Dolivo: Oh yes, that’s a little unfortunate. I mean, America is one of the richest countries in the world and can’t get health care to all citizens. But at the same time it’s not as bad as people think. You can get health care and it is now easier than years ago. For example, in Scandinavia the tax rate is so ridiculous, sometimes you have to pay so much in taxes that you ask yourself why you go to work. I like the social system in Europe, how they care about the citizens, and I would love for America to have the opportunity to find something similar — but I think it’s gonna work.

Sleaze Roxx: What made you decide to be a musician?

Georg Dolivo: My uncle and three other guys have a variety show in Finland on TV and I grew up with them when I was there for the summer and so I sat around and saw how the people made music and I thought to myself, ‘how cool is that to do?’ My mom wanted me to be a lawyer, but as I got a little older I met the boys in Venice and we all started with rock ‘n’ roll. Yes, my uncle started it. 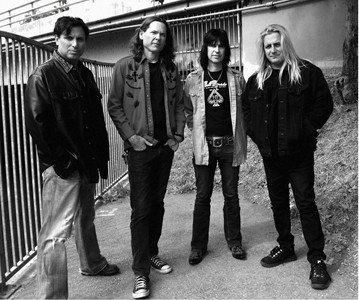 In LA you had such a good club scene back in the ’80s. Before we started Rhino Bucket I played with bands in clubs like The Troubadour orThe Roxy. I remember I was about 15 years old, I was too young to have a beer in these bars, but then I met the otherguys and it ‘clicked’ — we fit together and started Rhino Bucket. Back in 1987, as we began, there was the hair-metal thing all over Los Angeles and we just played our kind of groovy, old, hard rock ‘n’ roll. With the kind of music we play we were 15 years too late… or 15 years too early.

Sleaze Roxx: How has the LA rock scene changed from the 80’s to now?

Georg Dolivo: Back then it was all hard rock and hair-metal bands — there were a lot more bands there and the competition was very strong, it was easy to get a gig and get noticed by the record companies. Now it’s more concentrated on a small area in Hollywood, but still with the greatest musicians in rock and blues and also still working in recording studios. There are some rock clubs in Los Angeles but I don’t really go out to the clubs — Brian Forsythe, the other guitar player, does more. When I’m home I fall into bed with the remote control in my hands, say hi to my wife, and I’m done. The rock scene is still there but not as crazy as it was back in the ’80s. Thank God… I’d be dead!

Sleaze Roxx: Did you have to ‘pay to play’ for gigs back then?

Georg Dolivo: Back then there were clubs where you had to pay like The Roxy, which is the Key Club today, or Gazzarri’s. As a band you didn’t haveto ‘pay to play’, but bands like Poison and Warrant did it. But those bands had a special interest in self-marketing, so they did it that way.When young bands ask me I say that you don’t have to do this. Back then, when bands ‘paid to play’ they became experts in fiance and kept an eye on the costs. That’s what those bands had the focus on… marketing themselves.

Sleaze Roxx: What Rhino Bucket songs are you most proud of?

Georg Dolivo: I really like “I Was Told”, it’s a really simple song — the acoustic version was on ‘Then It Got Ugly’ and the electric version was on the album’Pain’. I also love “Screamer”, because this song describes all of what Rhino Bucket is.Also I’m very proud of the new album ‘Who’s Got Mine’, which is very cool because the songs go a bit further in the bluesier direction, and that’s because of the new players in the band — Anthony Biuso on drums and Brian “Damage” Forsythe on guitars. This Rhino Bucket is more American than the things we’ve done before.

Sleaze Roxx: What are your fondest memories as a musician? 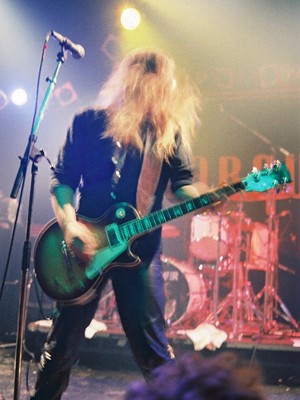 Georg Dolivo: We played a show in Sydney, Australia with The Angels — that was great because there were about 8,000 people, that was reallynice. The Angels are a fantastic band. The other memory was a show we headlined at Milwaukee Summerfest a few years ago. That washilarious because we got a late plane and just arrived at the festival, got on stage and rocked on — without any time to warm-up.We also shot a video at Stonehenge in England and there were couple things that didn’t work out and it was so Spinal Tap-like, and I alwaysremember that.

Sleaze Roxx: Going back in time, what would you differently in relation to the ’80s and now?

Georg Dolivo: So many things naturally happen to a band but the one thing I’d have changed is when former guitar player Greg Fields didn’t want to be in the band anymore in 1993/1994. He was basically requested to be in the band, which he was for 5 years, but he wanted to leave. Hold on… any other things I can’t remember.

Sleaze Roxx: Between January and March 2011 you played over 50 shows in Europe. It was an awesome tour through a lot of countries. Isn’t it tough to play a show almost every night?

Georg Dolivo: We love to play — give us a club, a beer and a crowd, that’s what we love. We just love touring and seeing a lot of countries, so we did a little sightseeing. We visited middle-aged castles in Spain and France and had a little Viking feeling in Norway.

We don’t care if we play in front of 10 or 1,000 fans, it’s always fantastic and it’s all about the music. We had a great show in Lubeck (Germany) and shows at the Wild At Heart Club in Berlin are always packed with our fans and we did a really good show in Helsinki (Finland). It’s cool to perform in your hometown, but a little weird having the family in the crowd. We always remember certain cities and certain things — with this line-up of Rhino Bucket it’s always fun to play… I love it!

Sleaze Roxx: Did you ever feel frustrated with the rock business at a specific time?

Georg Dolivo: No. A lot of people have asked me that. We are a great band with nice guys — no one is jealous or anything like that. There are other bands out there, having more success than us, but I’m fine as long as there’s another gig tomorrow, another hotel I can rest in and someone who will give me a beer and a warm meal — I’m just okay, I’m happy! Nowadays I need a bit more sleep than way back then… now I need 3 days to recover when I’ve had too much beer. And now I drink only beer, not like back then when it was whatever was on the table like Vodka or Jack Daniels — I don’t do that anymore!

Sleaze Roxx: After the European tour what are the future plans regarding Rhino Bucket?

Georg Dolivo: We are returning to America to tour a little bit and then come back to Europe in June to do a couple shows and festivals like Sweden Rock in… Sweden. Then we’ll be going back to U.S. again to play more shows and probably return to Europe in the winter to get back on the road and writenew songs for the upcoming album, which we will release in 2012. We are always working — we’ll rock ’til we die.