Hessler released their debut EP ‘Bad Blood’ in April of 2011 and Sleaze Roxx reviewed the album shortly after. The review of the album stated, “There is a certain low-budget charm to the band’s debut ‘Bad Blood’, not so much in sound quality, but in the way they deliver their songs — it keeps reminding me of what Leather Leone and Bitch tackled during the ’80s metal uprising.” That review hit it right on the head. Close to a year later we caught up with gorgeous singer Lariyah Daniels and the guys in Hessler for an update. The band took part in this years’ South By Southwest and they have an even bigger gig coming up this spring. If you haven’t picked up their debut album do yourself a favor and find it, and get ready for new music later this year.

Sleaze Roxx: How long has Hessler been together and what’s the significance of the band’s name? 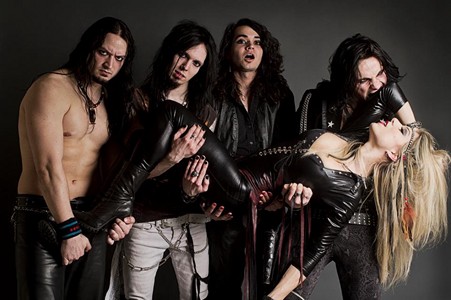 Igz Kincaid: Hessler as we know it now has been together since August of 2011. I started the band back in 2008, but the vision I had of what the band should be began when Lariyah and Marcus joined in October of 2010.

Frankie Sripada: Significance of the band name? It is whatever you can conjure up, dream of, or imagine.

Erik Michael: Yeah, like a sex position or a way to die.

Sleaze Roxx: Lariyah, how long have you been singing? I know you’ve done modeling as well… which came first? How difficult is it juggling two different careers?

Lariyah Daniels: I started singing when I was in kindergarten. My Grandma would sew silly outfits and have me perform on stage in front of an ‘audience’ — of course it was a bunch of parents, grandparents and friends, but hey, that was my first time! In school I sang in a choir and school groups — fun times. Later on I dropped it and started listening to heavy music and enjoyed listening to it. When I was 18, I joined an industrial/electronic band called Get Wired, but we never really did anything worth putting out, and when we were about to push for something serious, I moved to the States (thankfully).

After moving to the States, four to five years ago, I modeled because I enjoyed it and it paid well — now I do it mainly as a source of income. If I have some free time, then yes, why not? But singing and performing with my band is better than anything that I have ever experienced before. In the past other things interested me, but once I got a good taste of performing in front of a packed crowd, there is only one focus in my life — Hessler.

Sleaze Roxx: Who are some of your influences as a singer? Hessler has a retro/traditional heavy metal sound, do you lean more toward music on the heavier side?

Lariyah Daniels: Just wait till you hear our new album, that will give you a better idea of how we all progressed with our music. It is much more mature, and my vocals have improved drastically. On ‘Bad Blood’ we were rushed and I did not have the opportunity to tap into my full singing potential for our style, whereas going into the new record I have over a year and a half of live performance and vocal work behind me. 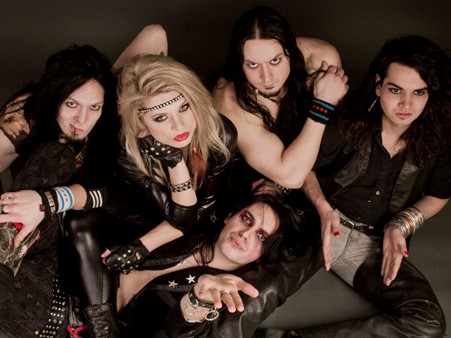 It is really tough to pinpoint a certain influence. In regards to female fronted bands, I was raised on Nightwish, Tristania, Arch Enemy, and Lacuna Coil. Igz introduced me to more metal bands like Warlock, Accept, W.A.S.P. and Manowar. The bands that I did not give much listening time to have become my favorites and the singer’s voices just blow me away, such as Eric Adams from Manowar. At this moment, I am going to have to say Doro Pesch.

Sleaze Roxx: Was it a conscious effort to make Hessler sound like a band that was formed around the New Wave Of British Heavy Metal?

Igz Kincaid: It makes my mouth water when people throw out this comparison, as NWOBHM is the reason I play music, specifically Iron Maiden and Judas Priest. I wanted to bring elements of it into the band, but it is not a contrived effort to sound like that — it is just the music that comes out of me naturally. Besides, we already have one Iron Maiden!

Marcus Lee Cox: For Igz and I the NWOBHM has always been a major influence, so it is bound to happen that our influences are expressed in our music and playing style.

Sleaze Roxx: How does the song writing process work within the band?

Lariyah Daniels: For ‘Bad Blood’ we ran with songs Igz already wrote, because they were complete and ready to go on record to start everything off. This way we could work on new material, which we have been doing consistently… and still are.

Frankie Sripada: Usually, one or two members bring together a riff, lyrical idea, or song structure and it grows from there — and the injection of everyone’s input shapes it into the final song that is played live.

Erik Michael: With the rhythm of the song, Marcus and I come up with our parts based on the existing idea, add flavor, and the band works as a whole to make everything gel.

Sleaze Roxx: How long has the material that made it onto ‘Bad Blood’ been in existence? Is Hessler a band that is constantly writing new material?

Igz Kincaid: For the tunes on ‘Bad Blood’ I wrote them through the period of 2008 through 2010, but they were ‘frankensteined’ throughout that time. I had issues with line-up changes with prior members, of which the positive result was that I could re-work the structures and ideas over and over while teaching the songs so they could be played live — and the end result is what you find on ‘Bad Blood’. 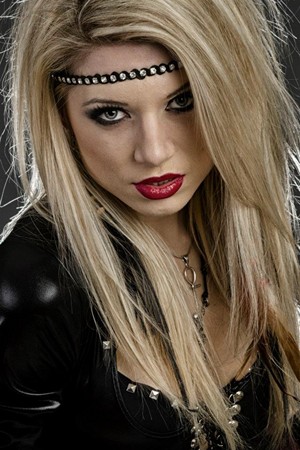 Frankie Sripada: The question is, when are we not coming up with new ideas? We have a tough time keeping track of all the parts that we come up with, especially with Igz and I having full blown ADHD. We try and contain ourselves by working on three new songs at a time, but there is always a queue for new ideas that deserve our full time efforts.

Sleaze Roxx: Metal fans throughout the years have become more accepting to females fronting bands. Have you found this to be true or have you faced barriers with people not taking you seriously as a front woman?

Lariyah Daniels: I would agree that is easier, but heavy metal is still a man’s world. Not to alienate anyone, but I value more when a true heavy metal fan tells me that I kicked their ass with my performance than just an average Joe, because metal fans value their bands and know what they like. Often I will have a person come up to me after a show and compliment me on the strength of my voice. This really makes me smile, and I think that to be taken seriously you have to deliver.

We just played at SXSW in Austin, and at the first show there were three guys who just had a look on their face of ‘ughh a chick singer’. Once we finished playing, they all bought merch, and one even joined in on the headbanging during “Shark Attack” — we were left speechless. If you kick ass, people will take you seriously.

Sleaze Roxx: You play regularly in your stomping ground of the Chicago metro area, and even have a song called “Windy City Wild Child”. What’s the game plan for the rest of 2012?

Frankie Sripada: In a bunch of places we haven’t hailed and killed before.

Igz Kincaid: We have 13 new fully completed songs as of right now and plan on demoing them in April, in prep for an album release hopefully before September. I’ve been in contact with some fantastic people to bring it to life properly, and the ultimate goal is to get to Europe in the Fall/Winter 2012. Fans are hungry for newly recorded tunes, as they’ve seen some live, but it has not been the right time to record.

With ‘Bad Blood’, we were limited financially and if you look at the credits it is easy to see that Marcus, Lar and I had to put together a rushed album as a three piece, when the tunes are ideally performed by a five piece band. With the new album, we will record it live in the studio and play as a whole, which we are very excited about. The winds have been in our favor so far… and we’re hoping it stays that way.