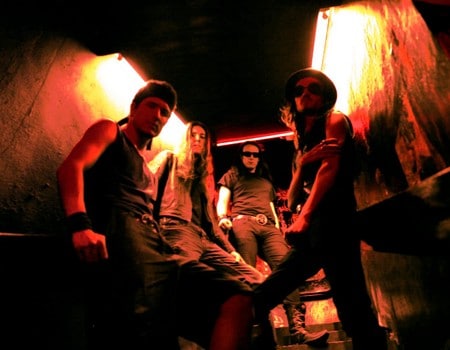 Hornet are an energetic metal band from London, bringing together elements of metal, punk and rock in their July 2013 debut album ‘Skies Are Falling’. Rocking crowds at venues such as The Barfly, The Garage and The Intrepid Fox, Hornet are proving themselves to be a growing force on the London metal scene. Sleaze Roxx recently sat down with vocalist Joe Thompson, guitarist Tollef Rikje-Pearson, bassist Max Thompson and drummer Alex Burt to talk about all things Hornet, including their upcoming show at O2 Academy in Islington.

Sleaze Roxx: How did Hornet come together?

Tollef Rikje-Pearson: Growing up I always knew that I wanted to be a rockstar. It’s better than working in some shit job and I didn’t know anyone else who I’d want to be in a band with except Max, Alex and Joe so we formed Hornet — simple as that. Fate, some might say.

Sleaze Roxx: Were there any problems with creating the line-up or did it all just come together?

Tollef Rikje-Pearson: No problems, lots of bands change members all the time but for us it was easy. Joe was originally the lead guitar player and we were without a singer, but then he knew that’s what he wanted to do. It was literally like ‘I’ll play guitar, Alex will play drums’ and so on.

Sleaze Roxx: How did you go about writing, recording and producing the ‘Skies Are Falling’ album?

Max Thompson: Writing songs gets me going — not the drinking, the sex, or the rock ‘n’ roll attitude, it’s the music. I’m always writing, if I ain’t doing that, I’m playing live or doing interviews, I mean what else is there to fucking do?

Tollef Rikje-Pearson: Recording the songs was easy, we know our stuff, and it’s simple really. Phil Kinman produced the album with Max co-producing. The guys did a great job — they worked us hard and the results are special.

Sleaze Roxx: Why did you decide to finance the album via fan donations and do you think this was successful? Do you think more focus should be on album sales compared to downloads nowadays?

Max Thompson: Labels don’t invest these days, they’re too fucking scared to take on a real band. At the end of the day the fans are what really matter, they funded it and we’re very grateful for that. Now people know that we’re not only a great live band, but great on record too.

Alex Burt: Maybe more focus should be on album sales but it’s not these days, it is how it is. Download or album sale, it doesn’t really matter — a sale is a sale. All bands need income to tour, record and survive.

Joe Thompson: ‘Skies Are Falling’ is only available at live shows or on our website. We decided we didn’t want to release it on iTunes as we want our fans to come to our shows and buy the CD from us — it’s more personal for our fans.

Sleaze Roxx: Do you think you’re missing out on fans by not making it more widely available? Would wider availability and promotion on sites like iTunes garner you more fans?

Alex Burt: Well of course it can, and we’re not saying “never” to an iTunes release. Our single “Skies Are Falling” and B-sides are available digitally only, but if someone wants our music we believe you should help a band direct — forget the middle man, at least for now.

Sleaze Roxx: The album contains some punk elements as well as metal. Was this your aim? What kind of sound do you think represents you? 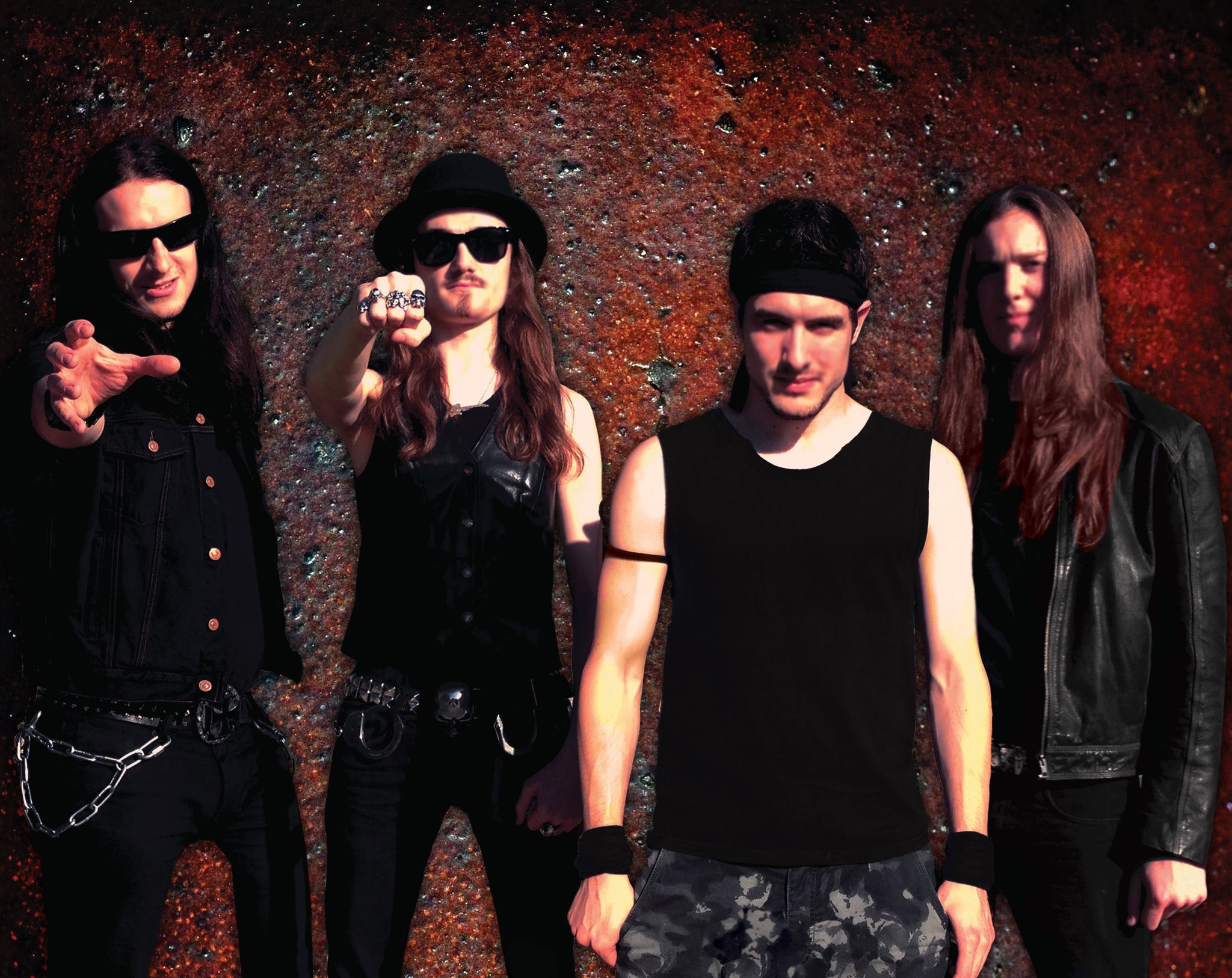 Tollef Rikje-Pearson: Kind of, I mean we play what is real to us, right now in our lives. We aimed to sound like an original modern band and we do. Some people go on about the ’70s, ’80s and ’90s, sure that’s great, stuff that influences us is from those times, but it’s 2013 you know? We’re the future, not the past.

Joe Thompson: We’re just living for today, I guess you could say…

Max Thompson: Agreed. People are saying we’re all the best bits of the best bands that everyone likes, that we sound like all the important bands. People may slag us off or say we sound like The Sex Pistols, KISS, Pantera, AC/DC, whatever… it’s better than sounding like Coldplay or some shite.

Alex Burt: Yeah, I mean it’s getting to the time when the ‘legends of rock’ are about to retire and the young fans and future fans need new rock bands. That’s what we’re fucking here for ain’t it?

Sleaze Roxx: You’re right, fans need new and young bands in this genre. Are there any that you guys particularly look to, listen to, or like?

Max Thompson: They do, where are the rock stars of tomorrow? I don’t want to see a guy on stage that looks like he should be working in a library or something and neither do the fans. That’s where Hornet comes in to play.

Sleaze Roxx: Why should fans buy the album?

Max Thompson: It’s a great record from start to finish. Music should be like sex, get to the climax and you want more. That’s what our album is all about!

Joe Thompson: It’ll make you want to pour whisky on your cereal or ride a motorbike down some stairs.

Sleaze Roxx: Have you done either of the above?

Joe Thompson: Not yet, but perhaps our fans should try it. Turn up ‘Skies Are Falling’, pour some whiskey on your cereal and tell me you don’t have a good time.

Sleaze Roxx: Where does your inspiration for writing music come from? 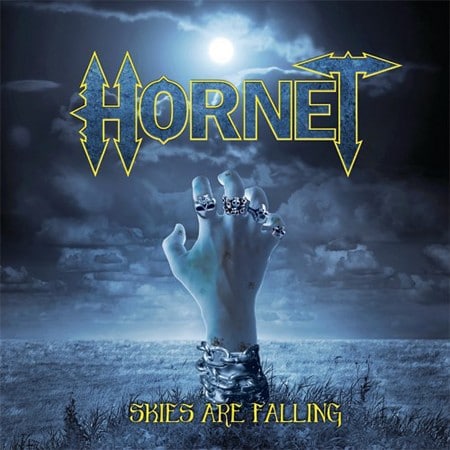 Tollef Rikje-Pearson: Life. Too many fucking bands these days get their influences just from their favorite band’s music. Fuck that, my life influences me and the shit I do. And that goes for all of us — we write about what we do, what inspires us. You don’t see Joe singing about drinking 24/7 or whatever when he doesn’t. I mean, how can your fans relate to your music if you’re singing someone else’s fucking life? They will connect with that person’s music, not yours.

Sleaze Roxx: What bands and artists influence you?

Max Thompson: Listen to ‘Skies Are Falling’ and you tell us.

Sleaze Roxx: What is your favorite place to play?

Max Thompson: Well we’re a relatively new band so we’re yet to tour the UK. Touring Europe earlier this year was, well, let’s just say ‘adventurous’… ask Alex about the watermelon. But yeah, give us a stage and we’ll smash it and everyone will know Hornet’s been.

Alex Burt: Don’t ask… tip though, put it in the microwave first.

Tollef Rikje-Pearson: When we do tour the UK it’ll be a riot. We’ve been creating a storm in London over the last year or so, selling out venues, recording our album and now we’re ready to release it on the world. Maybe we just need a label with big enough bollocks to take us on, right?

Sleaze Roxx: What do you think a label would bring? Would you ever consider making your own label?

Tollef Rikje-Pearson: It depends, every deal is different, a label can sign a band and no one else at that label gives a fuck. For me the most important thing is finding someone, or a few people, who truly believe in what you have to offer and then everyone’s combined hard work makes it happen — with the fans dedication of course. They are the most important asset to any band. A band with no fans, well… doesn’t exist.

Sleaze Roxx: What have been your favorite bands to play with and who would you like to open for?

Tollef Rikje-Pearson: As Max said we’re a new band on the scene so we’ve only played headline shows in London in the last year or so but it’d be ace to tour with bands like Buckcherry, KISS, Cancer Bats, and Airbourne I reckon.

Max Thompson: It was great to play with Kobra And The Lotus who are backed by Gene Simmons of KISS, they were really great guys.

Alex Burt: I’d love to play with bands like Papa Roach and Limp Bizkit too.

Sleaze Roxx: What challenges do you see in being Hornet? Do you think the current metal scene presents more challenges for a relatively new band today? 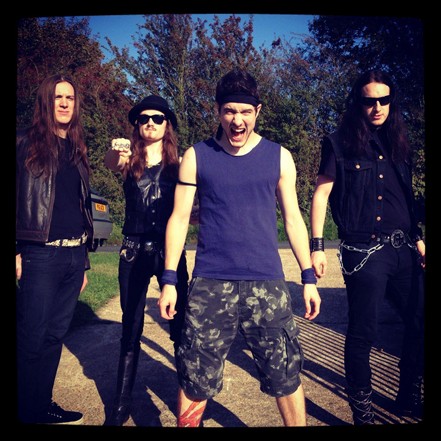 Joe Thompson: Touring with Max is gonna be a real challenge!

Tollef Rikje-Pearson: Do I think the current metal scene presents more challenges? Well… it’s always been challenging and it always will be. But the best bands always shine through eventually.

Alex Burt: Yeah, labels are spending money on one hit wonders rather than investing in bands for the long term. Just look at the major bands that have been kicking ass for forty odd years and still fill stadiums year after year.

Sleaze Roxx: Do you think the fact that these bands still sell out stadiums makes it harder for new bands to win fans?

Max Thompson: Absolutely, for good or bad, managers, labels, agents are here to make money, you know. It’s the music business after all. Metallica, AC/DC, and Motley Crue bring in big salaries for lots of people, it helps the economy and the industry and small bands don’t. But at the same time if people don’t take risks, like people did with Crue in the ’80s, there won’t be future stadium bands.

Joe Thompson: Totally, it’s a tough one to answer because some people say ‘they’re old it’s time to retire’, but people pay and records sell. However, like it or not, these bands are going to retire — they will end, that’s life. So someone better pay attention to upcoming talent or fuck, we’ll end up dominated by pop and rap.

Tollef Rikje-Pearson: Like it or not, I know people who’d rather pay £400 or something to see The Rolling Stones. I get it, they’re The Stones, but fuck why are they at the fucking top? The fans, right? Right now they are on their last legs, should they care about money or going out of this world with the bang they came in on? But they make money, lots of it and that’s business. It also takes the fans to say ‘hey, I could spend that money and go to ten small gigs or help fund that band I truly adore’. There are people like that, we have fans like that, and thankfully they’re the salt of this industry.

Sleaze Roxx: What can we expect from your live show on the September 5th?

Joe Thompson: A musical extravaganza that won’t disappoint. In July we took a short break from live shows to work on our new stage show. Expect big things.

Max Thompson: It’s going to be more over-the-top and theatrical than before. More fans always turn out to our next show by word of mouth. What we’ve got planned for the 5th of September is going to be special.

Alex Burt: It’s going to make even more of a movement for us. Shortly everyone is going to be talking Hornet, good or bad!

Sleaze Roxx: Where do you see the band going next?

Alex Burt: Back to bed.

Tollef Rikje-Pearson: Nah, Hornet’s going all the way to the top because of two things — our loyal fans and because we work fucking hard. End of!