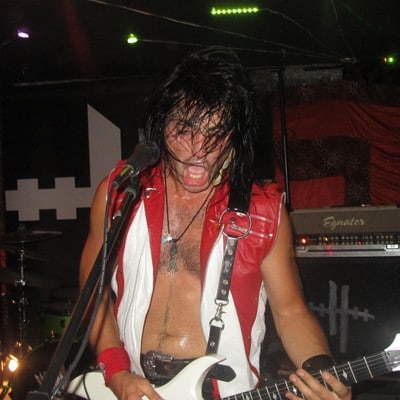 Where there is adversity there is also opportunity. Chicago based Hessler successfully overcame the departure of their long-time lead singer Lariyah Daniels earlier this year and forged ahead with ‘Ghost Dance’ — arguably the band’s best record yet. Now the band must do it all again! Only one month and three days after splitting with Daniels’ replacement Jessikill, guitarist Frankie Snakes Sripada and drummer Derek Spiteri have also parted ways with Hessler. Always the true professional, founder and guitarist Igz Kincaid took some time off from a well deserved vacation to answer a few questions from Sleaze Roxx regarding the recent developments within the group.

Sleaze Roxx: Frankie and Derek’s departure is a big surprise. Did you have any indication this was going to happen, and if so, since when?

Igz Kincaid: You feel something like this; Hessler is like my child so when anything doesn’t feel right it puts you on edge. Whether it is missing out on a good show booking or sizing up characters in new towns who might break into your van, it just makes you aware. I felt something was coming down the line around a month and a half ago, but thought we would soldier through it and come out stronger like last January when we parted with Lariyah — but I guess I was wrong. The day of our band meeting, there was just a stillness in the air that you know something bad is coming. I’m paranoid, always prepared for the worst, but you’re only paranoid until you’re right.

Sleaze Roxx: Jessikill’s official departure was about a month ago. How much of an impact do you think that had on Frankie and Derek leaving the band?

Igz Kincaid: I don’t think it was her departure, per say. The rest of the band was in agreement about her, but I think it is more the having to find a new voice for the band and go through all of the work for same.

Sleaze Roxx: What reasons did Frankie and Derek give you for leaving the band?

Igz Kincaid: I’m not going to speak for anyone but myself, but I’ll give my opinion and basic logistics. Derek lives three hours away from Chicago and just finished school. I don’t think he wants to move to Chicago and commit the time and effort to find a new voice and keep going. He seems to have his life going the way he wants to in his hometown, and I’m happy for him.

Regarding Frank, I believe he just wants to get his life in order. They’re young guys; I think the pressures of reality and adult responsibilities increasing day by day are hitting them. There’s no shame in that. It’s just life.

Sleaze Roxx: The Hessler documentary came out on Vimeo On Demand earlier this week. How much input, if any, has Hessler had in the contents of the documentary and will it shed any insight on what happened with Frankie, Derek and Jessikill?

Igz Kincaid: We had our opinions as a band regarding anything we all agreed upon, and we trusted the filmmakers, Biliana and Marina, with taking that into consideration. I personally think that it was a success.

[In terms of] insight to them not being in the band anymore, ehhh not really. Jess came into the band at the very end, she didn’t have anything to do with it. She could have, but that didn’t happen. The documentary was started in the spring of 2012 and covers our first tours as a growing band — we were noobs learning as we went along. I believe viewers will make their own opinions and conclusions as with anything else, but the ending will give you a ledge to hang on to.

The link for the documentary is vimeo.com/ondemand/kamikazis.

Sleaze Roxx: It appears that Hessler is forging ahead despite losing three of its five members. How long do you forecast it taking before the band is ready to go again?

Igz Kincaid: Erik and I already wrote a new song and are fired up to get the ship back into turbulent shark infested waters. I look at a band similar to a sports team. Ideally, we all want a team that stays together forever but for a variety of reasons and circumstances that doesn’t always happen. We’re all trying to climb the musical mountain, and everyone has a different way of doing it or an opinion on how it should be done. I know where I want to go, and I’m as determined as the day I started.

I would love to be on stage tomorrow but Erik and I are excited to have a clean slate to work with. Let’s see what we can mastermind. There’s no deadline, but we don’t want to lay on the shelf and collect dust either — machine on.