ATOMIC RIOT ARE THE ATOMIC PLAYBOYS OF THE MELBOURNE ROCK SCENE. THEY COMBINE THE PIZZA-PARTY PHILOSOPHY OF ANDREW WK WITH THE HIGH SCREAMS HIGH KICKS AND AXE SWINGING STYLE OF BANDS LIKE VAN HALEN AND MÖTLEY CRÜE. I RECENTLY CAUGHT UP WITH VOCALIST ASH LIGHTNING TO TALK ABOUT THEIR INFLUENCES, THEIR LIVE SHOW AND THEIR NEW EP. 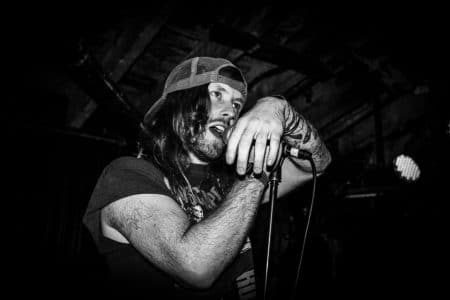 Sleaze Roxx: How did the idea for Atomic Riot come together and how did you all meet?

Ash Lightning: Drew Surh [ex-The Deep End lead guitarist) wanted to rock another killer project with full steam ahead power and less constraint on the Acca dacca vibes he had in the Deep End so he threw the signal out there and the rest was history. First, Alex Road Rage Richo from Smokin Mirrors, his old Sydney crew, joined the band; then me. I walked into the rehearsal in my tiny shorts, screamed and I was in. All we needed was the thunder from Killshot, Tommy Sunset and Nick Caligula. We got Tommy and after three other excellent drummers, we managed to snag the dream team.

Sleaze Roxx: Your live shows are really well received and there’s always a huge element of crowd participation in them whether it’s free pizza and whiskey shots for the audience or pulling people up on stage to sing karaoke with the band. Why is crowd participation so important to your show and how do you keep coming up with fresh ideas?

Ash Lightning: Honestly, we just put on a show that we wanna see. I think of all the rad shit that we see at bigger concerts and gigs we love and then throw it all together. I hate to sound like a shithead but honestly a lot of live acts fail to get me super pumped and ya know, and when friends, fans and music lovers are paying $10 to see a show, give em a fucking SHOW! The crowd and the audience are half the experience. I know it’s cheesy and cliché but without them there are no us. Fans and people who come to our shows mean everything. Also who doesn’t like to party? Give ’em something to remember, whether it’s singed eye brows, sore voice or a hangover [laughs].

Sleaze Roxx: Who are some of your personal influences as a vocalist and as a performer?

Ash Lightning: I’d probably say the main influences, whether they come through or not, are probably the greats, Bon [Scott], Iggy, David Lee Roth, Sebastian Bach and Robert Plant with a sprinkling of Axl Rose [laughs]. 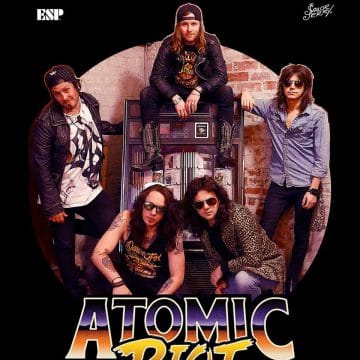 Sleaze Roxx: You’ve just released your debut EP. Can you tell us about the recording process?

Ash Lightning: Always super fun! Never a chore, We go with the amazing Chris Themelco of Monolith Studios here in Melbourne [Australia] and he has the magic fuckin’ touch dude. The EP actually came about over time. We’d held onto these unmastered tracks from the beginning of Atomic Riot and recorded “Get Your Kicks” to do a music video and with the plans to do an album, but we were like “Holy shit! We don’t have any physical anything for our radlord army!” So we remastered and tweeked the OG tracks, had Nick Caligula rain down the rumble from the jungle on them and boom — EP! If ya grab an EP, you’ll notice that the track listings are wrong…. Oooooh rare!

Sleaze Roxx: You guys use ’80s culture to help promote your band on social media. Whether it’s movies like Bill & Ted, Wayne’s World, Star Wars, etc or brands like MTV. Why is ’80s pop culture overall so important and influential to you?

Ash Lightning: Eighties pop culture is the ring that binds us. All members of this band are huge nerds for cool shit in the ’80s, whether it is music, movies or comics. Though we are a 2010s+ band, we feel that the attitude of the ’80s, ’70s and ’90s resonate with us the most. It was a time of rock n’ roll, cheesy action, monsters and bad assery. Though we understand that the eras before us had their political problems, the level of creativity and spectacle were grand and exciting, which takes you to another world. It’s an escape form the bullshit of your day to day, which is kinda what we want at our shows. Also Bill, Ted, Wayne and Garth all had most excellent attitudes and continue to inspire us on a daily basis.

Sleaze Roxx: Are you guys trying to bring the ’80s back for a younger generation or are you trying to help the people who were there relive their youth? You seem to be doing both. 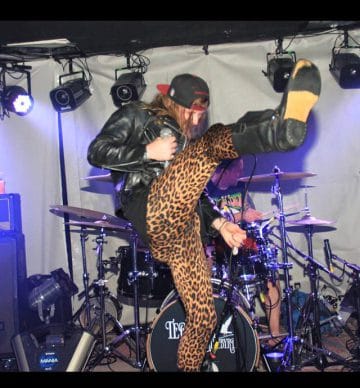 Ash Lightning: Nah. We just play what we like and hope everyone will enjoy what we are doing. It’s just a shame that many genres of the ’80s are now frowned upon, or tainted by either the fashion or the decadence, when really, the music mastery of that decade was transcendent and dare I say better than music of today. But there is a large army of excellent humans that love ’70s, ’80s and ’90s heavy metal, hard rock, hair metal and hard blues and we are very thankful for that and hope 90% of them check us out.

Sleaze Roxx: If you could take Atomic Riot on the road with any band from any era, who would it be and why?

Sleaze Roxx: Where can we pick up a copy of the EP and where will we be able to catch your next show?

Ash Lightning: I’m gonna set up a Big Cartel for our incoming merch and EPs. Stay tuned on Instagram and Facebook. Next show is about to be announced in the coming weeks… Also a possible tour. In the meantime, we’re on all platforms such as Spotify and Apple Music. Stay excellent radlords!