THE NAME JAMES CURL MAY NOT AUTOMATICALLY RING A BELL TO MANY SLEAZE ROXX READERS BUT IF YOU LIKE ROCK BIOGRAPHIES, YOU MAY WELL WANT TO CHECK OUT ONE OF JAMES CURL’S BOOKS. IN THE LAST COUPLE OF YEARS, CURL HAS WRITTEN AND RELEASED THE BOOKS ‘RONNIE JAMES DIO: A BIOGRAPHY OF A HEAVY METAL ICON’ AND ‘DOKKEN: INTO THE FIRE AND OTHER EMBERS OF 80S 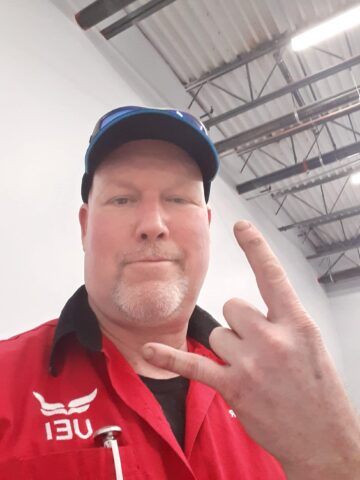 METAL HISTORY.’ BOTH BOOKS ARE AVAILABLE FOR PURCHASE VIA AMAZON. SLEAZE ROXX CAUGHT UP WITH JAMES CURL TO FIND OUT MORE ABOUT HIS PASSION FOR WRITING INCLUDING WHAT LED HIM TO WRITE THE TWO AFOREMENTIONED BOOKS AND WHAT HE’S GOT ON TAP FOR THE FUTURE.

Sleaze Roxx: What led you to writing books?

James Curl: I’ve had an interest in the sport of boxing for a number of years and had met several authors that had done boxing biographies. This is what initially sparked my interest to write a book. So basically, I just decided one day to pick one of my favorite fighters, and write a book about him. It took two years, but I eventually finished the book. From there, I decided to do book about one of my other passions — rock ‘n’ roll. I chose Ronnie James Dio because nobody had done a full-length book about him.

Sleaze Roxx: What prompted you to write about Ronnie James Dio and Dokken in particular?

James Curl: They were two of my favorite bands growing up, and they both had interesting stories. Ronnie had such a legendary career and Dokken had lot of elements that make for a great story.

Sleaze Roxx: How long did each of those books take to write from start to finish?

Sleaze Roxx: Your latest book ‘Dokken: Into The Fire and Other Embers of 80s Metal History’ was interesting in that the information is largely based on interviews from Don Dokken and Jeff Pilson but there’s no input from George Lynch and “Wild” Mick Brown. It must have been especially disappointing to interview George twice for your book and then have him ask you not to include his information. Did George provide you his reasons for pulling out and how much of a disappointment was it for you?

James Curl: It was a disappointment not to have George and Mick involved. They were obviously important to the band and it would have been great to get their input. As far as George, he was really nice the two times I spoke with him, but then he pulled the plug. He simply said he didn’t feel comfortable going down memory lane. I suspect, however, that there was more to it than that. I know that a lot of people want to write their own biographies and don’t want to share their stories. So maybe that was it.

Sleaze Roxx: George Lynch’s position is even more surprising when you see how many interviews that he does when it comes to promoting one of his projects. Do you think that the information that he initially provided to you in those two interviews would have caused a fuss if disclosed in your Dokken book?

James Curl: No, I don’t think so because everyone knows the Dokken story. There’s probably not much that he can say that would cause any drama. I think he probably just wants to keep the story to himself so he can write his own memoirs someday.

Sleaze Roxx: It’s been said that there’s been a lot of animosity between Don Dokken and George Lynch, and at the very least during the early years. Did you detect any of that when interviewing the guys and what are your thoughts on that “relationship”?

James Curl: There was defiantly some tension between Don and George back in the day, but I personally did not detect any animosity now. Don had nothing bad to say about George and Jeff is a very nice person. They both only told the truth of what really happened. I think at this point, the guys pretty much get along. They are older now and people mellow with age.

Sleaze Roxx: Your Dokken book title mentions that there will be other bands covered in the book. That is somewhat unusual in that usually, autobiographies just focus on one band. Why did you end up doing that?

James Curl: There was just so much going on during the ’80s that it was hard not to mention some of the other bands. Also, I wanted to add a little bit of the Sunset Strip history, since the Strip is such an integral part of the ’80s metal scene.

Sleaze Roxx: How different was it writing the Ronnie James Dio book compared to the Dokken one? In one instance, the main person has been deceased for a number of years while in the other, the band is still a well-known active entity.

James Curl: In a way, they were the same in terms of how I write a book. The big difference of course was that I could get first-hand info from Don. But basically, it was very similar.

Sleaze Roxx: What’s one thing that you didn’t know that really surprised you as you gathered information for your Ronnie James Dio book? James Curl: The one thing that really surprised me was Ronnie himself. I had no idea how much of a caring person he was. Ronnie was involved in charities like Children of The Night as well as animal charities. By all accounts, he was generous with both his time and money.

Sleaze Roxx: Same question but for your Dokken book!

James Curl: The one thing that surprised me about Dokken was just how good those four guys were together. Even though they had a hard time getting along, the musical chemistry was undeniable.

Sleaze Roxx: Do you have any books currently in the works?

James Curl: I have a couple.

Sleaze Roxx: Can you please provide some details?

James Curl: I am currently working with one of the former members of Dio on his memoirs. At this time, I can’t say who. I am also putting one together that will feature 15 different guitar players, with each player getting a chapter to tell his/her story. So far, I have some great guitarists like, Rowan Robertson, Gus G., Tracy G., Greg Leon, Steven Lynch, Jeff Duncan, Oz Fox, and a bunch more. Also, I have been knocking around the idea of doing a book about Quiet Riot.

Sleaze Roxx: Aside from those two books, what are your future plans writing wise?

James Curl: To keep writing about things that I am passionate about.

Sleaze Roxx: Last question for you — what are you top three favorite albums of all-time?

James Curl: Oh, now that’s a hard one. There are so many great albums. My picks are Dio’s ‘Last In Line’, Whitesnake’s self-titled album and AC/DC’s ‘Back In Black.’