Guitarist Sonia Anubis was juggling two bands consisting of the all-female death metal act Crypta and her own rock/metal band Cobra Spell. On April 5th, 2022, Crypta issued a press release that Anubis had left the band. In the statement, it was noted that “It was her decision, and we understand and respect it, so both sides will now follow new and different paths.”  It appeared that it was a respectful parting. This then opened the door for Anubis to dedicate more time to Cobra Spell who had just released new music via the independently release [EP] ‘Anthems of The Night.’ The band has been receiving some critical acclaim for their throwback sound. 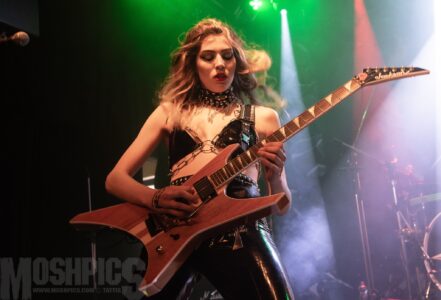 On May 1st 2022, Anubis and Co issued a statement regarding a line-up change in Cobra Spell. “We want to introduce you our new front vixen and singer, Kristina Vega! After learning all of our songs in less than a week, stepping in on our latest tour straight away and delivering nothing but the very best; excellent vocals, mind-blowing performance and pure companionship. We are extremely thankful, lucky and proud to have her in our band. She really completes the band and is exactly the person we needed in the line-up. Kristina has a wide range when it comes to her singing style and a really fresh understanding in melody, which will offer us a lot of cool new options for the future Cobra Spell music, this truly excites us a LOT! Kristina has years of experience both on stage and in the studio and she is a fully-booked metal vocal coach in Barcelona, Spain.”

Having seen some clips of Vega in action fronting Cobra Spell, she was the missing ingredient. We caught up with Anubis before the official announcement of the arrival of Vega. Enjoy the interview. We’re sure we’ll be speaking with Anubis again soon. 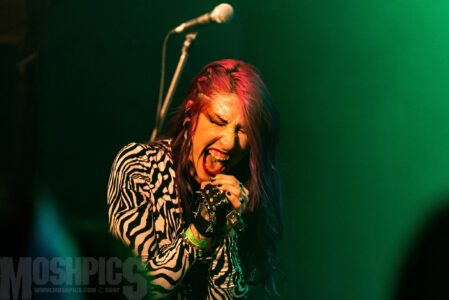 Sleaze Roxx: Sonia, up until a few days ago you were juggling two bands Crypta and Cobra Spell, which are two very different bands. You were also in Burning Witches for a couple years, before you moved on from that band. You recently made the decision to leave Crypta to dedicate your time to Cobra Spell. Was it too hard to continue to dedicate time to two bands?

Sonia Anubis: It was quite time consuming to be in two bands, but music is my passion and I do it with all the love I have for it. Though at a certain point, I realize that priorities had to be made, and therefore also led to making certain difficult choices. The best for me is to invest my energy fully on a band that makes me feel the happiest, and this is my band Cobra Spell. I have complete freedom of creativity there since I started the band from the beginning and came up with the concept, so it is 100% part of me.

Sleaze Roxx: I know you’re a huge fan of ’80s hard rock. You have posted several videos of you covering ’80s hard rock and thrash metal songs. Who introduced you to this music and what was the first band/song you recall hearing? 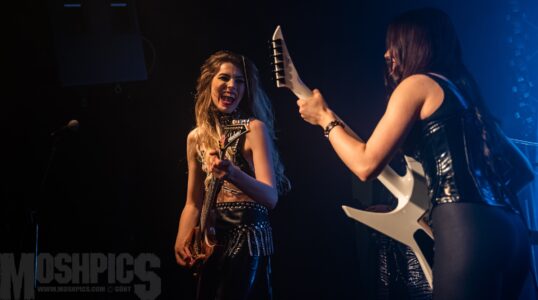 Sonia Anubis: YouTube was my way to discover all of these ’80s musicians. I literally didn’t know anyone that knew these bands. The first band that I got into was KISS, and from there it all started getting heavier and heavier. The first songs that I recall being extremely inspirational to me are KISS’ “100,000 Years” and “Nothin’ To Lose,” and W.A.S.P.’s “I Wanna Be Somebody.”

Sonia Anubis: I have been numerous times in the United States already. The highlight was to be able to do some hikes in the forests there. Oregon features some very nice nature.

Sleaze Roxx: How long has Cobra Spell been together? How would you describe the sound to the fans that haven’t heard your music? Would it be accurate to say that it’s ’80s influenced? 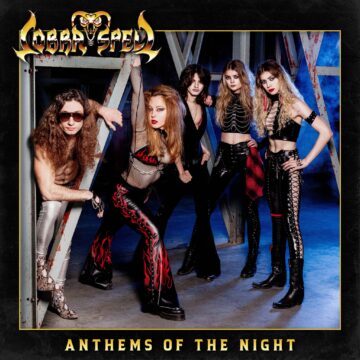 Sonia Anubis: Cobra Spell was founded in the summer of 2019. So I believe like 2½ years ago? But we are just starting to really be 100% active now. It used to just be just a ‘side-band’ for me before. We made a hybrid combination of ’80s heavy metal and hard rock with a sleazy/glammy touch. It surely is undeniable that the ’80s are a huge influence to us sound and aesthetic wise.

Sleaze Roxx: You have new music. The EP is titled ‘Anthems of The Night.’ How long has this album been in the works?

Sonia Anubis: As for the composition, I really took the time to write the songs at my own pace without any kind of rush or pressure. We had the material ready already a while ago but going to the studio came a bit later. Maybe a year after the demos were recorded.

Sleaze Roxx: Your latest video is “The Midnight Hour.” Was that video as fun to make as it appears? Will there be more music videos? 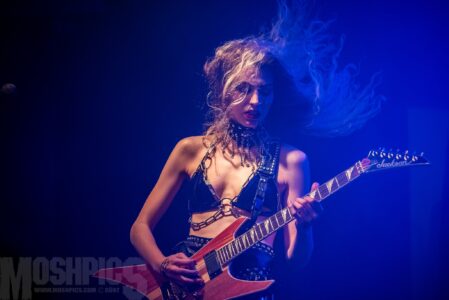 Sonia Anubis: The video was a party, but so were the recordings! The recordings took a short day so we had quite some time pressure going on but we had lots of fun recording it and this is also visible in the video.

Sleaze Roxx: Will there be a full-length album in the future, or will you be focusing on releasing EPs?

Sonia Anubis: Who knows? Only the future knows! We try to keep our options open depending on what the near future offers us.

Sleaze Roxx: Who is your guitar hero and why?

Sonia Anubis: I would say Tony McAlpine and Marty Friedman. They are both mind blowing guitarists with a wonderful sense of melody.

Cobra Spell performing “Addicted To The Night” and “Poison Bite” live at Baroeg in Rotterdam, Netherlands on May 6, 2022 (video from Tom Heavy‘s YouTube page):

Sleaze Roxx: If you could pick one band from the ’80s that really influenced you, who would that be and why?

Sonia Anubis: I would say KISS even though they are a ’70s band, they had their era in the ’80s too! They have always been my 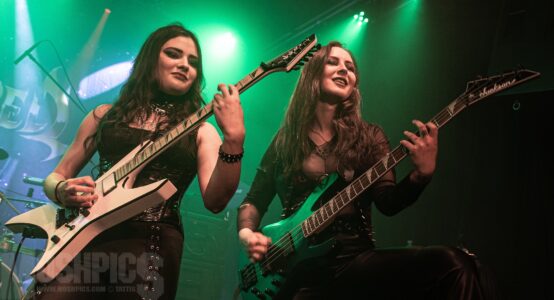 favorite band and the band that got me into music. Their music and aesthetics in the ’80s were amazing and wild. I love it. As for a specific ’80s band, I’d say Dokken was a huge influence on Cobra Spell.

Sleaze Roxx: Which does Sonia Anubis prefer and why? Megadeth or Metallica?

Sonia Anubis: Megadeth, because of their awesome melodies and solos, and I prefer their songwriting a lot more.

Sonia Anubis: Ratt — I am obsessed with them and are a must listen to every single day. I love them. Sleazy goodness. 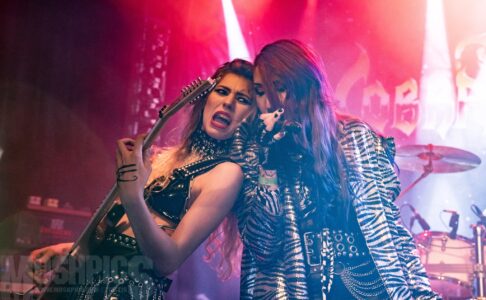 Sonia Anubis: Winger, for no reason, maybe because I like their solos more.

Sonia Anubis: Judas Priest — absolutely love them and listen to them a lot more than Iron Maiden. Judas Priest is a huge influence on me.

Sonia Anubis: That one’s tricky because both make amazing music, but I’ll go for Alice Cooper because he is such a good man and supports young musicians! 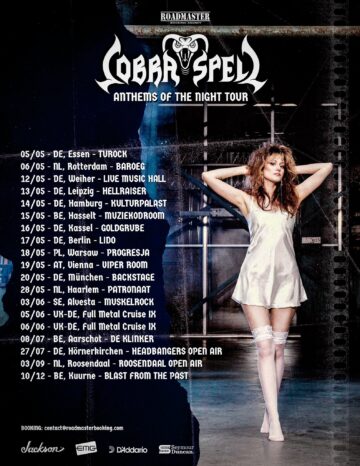 Sleaze Roxx: Have you ever experienced a ‘Spinal Tap’ moment on stage? If so, what happened?

Sonia Anubis: Many times, things go wrong on stage, sometimes and that’s normal. We are human! Actually, on my latest tour, one of the springs of my Floyd Rose system jumped out of my guitar! That truly NEVER happens, but it caused my guitar to be completely out of tune and sounding horrible. I had to change to a back-up guitar though it wasn’t even set-up! I will be better prepared for it next time [laughs]!

Sleaze Roxx: If you could assemble a ‘dream band’ with you in it, what would the line-up be?

Sonia Anubis: I am in my dream band already. I don’t need anything else!